A couple years ago, few investors would have identified The New York Times (NYSE:NYT) as a potential growth stock, yet The Gray Lady has enjoyed a heady run lately. Shares of the newspaper and online content powerhouse surged 44% in 2019, and over the last three years, the stock has booked a cumulative total return of 148%. In this article, we'll look at the key factors that will affect shares in 2020. For reference, the company will next report quarterly earnings in early February.

The New York Times' digital-only subscription growth has figured as its main economic driver and stock price catalyst over the last few years. In the first three reported quarters of 2019, digital-only subscriptions grew 31% versus the comparable prior-year period, while revenue from these products rose by 15%. Although news product subscriptions accounted for most of this growth, the smaller category of non-news digital "subs" has experienced extremely rapid expansion. This category, consisting primarily of stand-alone subscriptions to the Times' highly regarded cooking and crossword products, achieved revenue growth of nearly 57% to $15.6 million during the first nine months of 2019.

Heading into 2020, The New York Times plans to juice subscription growth by cashing in on its promotional investments. During the company's Q3 2019 earnings conference call in November, CEO Mark Thompson relayed that the newspaper is cutting down on the number of articles users can read anonymously, thus encouraging visitors to go through a registration process that should eventually result in higher subscriptions. Also, the company is attempting to convert customers who originally signed up in 2018 on a $1-per-week promotional digital subscription into full-price subscribers. Management should have more data on both of these efforts in the next two quarters.

The New York Times' digital subscription momentum is buttressed by new content offerings, including podcasts, TV, and radio shows. This recent evolution is best exemplified by The Daily, its runaway hit podcast and radio show about its top trending stories. The Daily boasts over 2 million listeners, and regularly lands in the top 10 podcasts as measured by podcast ranking services that track listening stats.

The company's new television show, The Weekly, is another example of content innovation. Management cited revenue generated by The Weekly as the main force behind a nearly $10 million year-over-year increase in "other" revenue in the third quarter (other revenue totaled $48 million during the period).

The Daily, The Weekly, and other shows have opened up a new advertising stream for The New York Times, but the primary purpose of this content is to expose a wider audience to the company's journalistic prowess, and funnel listeners to customer status under its "subscription-first" revenue focus. Shareholders can expect additional investments in both journalism and content production in 2020, as the organization's initial yield from this effort has exceeded expectations. 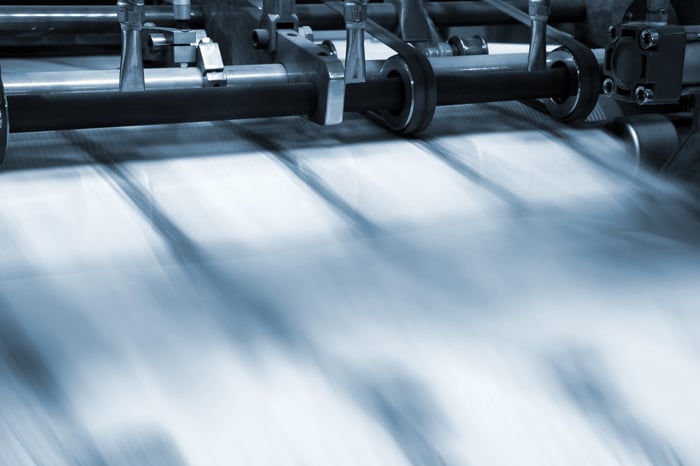 One headwind shareholders will watch in 2020 is a recent deceleration in advertising revenue. While print advertising was expected to be soft in 2019 (and indeed, it declined about 9% to $191 million in the first nine months of the year), digital advertising revenue has also weakened in the last few months, dipping 5% to $55 million in the third quarter. It's still grown by 9% to $168 million in the first nine months of 2019 against the comparable 2018 period, but management expects the digital advertising top line to decline in the fiscal fourth quarter by "the mid-teens" versus Q4 2018, which saw an outsize 31% increase against its own comparable period.

The New York Times' digital advertising revenue tends to be variable, as it's often affected by large, one-time deals. It's too early to tell whether current digital advertising weakness will persist as an earnings headwind throughout 2020. Management is nonetheless confident that the company will see a pickup in this revenue stream at some point in the coming quarters. During the third-quarter call, Thompson cited as just one example of progress a new multiyear agreement with Verizon in which The New York Times will offer free access to over 7 million students and teachers in Title 1 schools across the United States.

The New York Times' earnings and share price renaissance over the past three years can be traced in part to a surge of subscriptions it reaped during the 2016 election year amid heightened interest in the U.S. presidential race. Subsequent coverage of the Trump administration has also factored into subscription growth. I've previously described the often adversarial relationship between the company and President Trump as a mutually beneficial, "frenemy" arrangement.

As we head into a new election year, The New York Times is almost certain to see a boost in digital subscriptions, as its investments in greater journalistic firepower over the last three years will enable it to provide far-reaching and in-depth coverage on the 2020 race. Investors can expect digital subscription activity to enjoy a tailwind from this effect as early as this summer. Depending on the company's performance to that point, this may either help it recover from near-term profit-taking or sustain its strong share price momentum of the past three years.