There is nothing good about an unsustainable dividend. A high yield may look good on paper, but it can result in negative total returns when a company doesn't have the cash flow to cover its large payout. That's why diversified tobacco company Vector Group's (NYSE:VGR) decision to slash its $0.40 quarterly dividend is good news for investors. That said, it's also too little too late.

Decades of unsustainable payouts have left Vector Group with more than $1 billion in long-term debt -- much of it issued at deep junk levels. Given that interest expenses alone are swallowing about half of operating income, investors should avoid this stock until it gets its balance sheet under control. 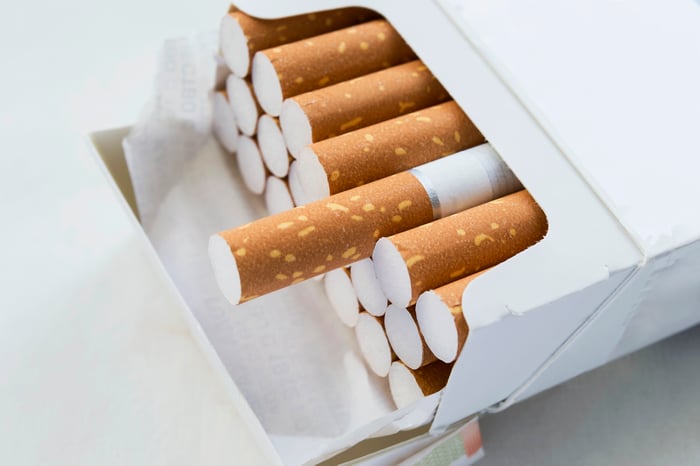 An unsustainable dividend and ballooning debt

Vector Group has long dazzled investors with its unusually generous payout. The diversified tobacco company steadily increased its dividend for almost two decades, in addition to offering a 5% annual stock dividend. Unlike the dividend aristocrats (S&P 500 companies that have increased their dividend payouts for 25 years or more), which tend to offer single-digit yields, Vector Group's payout as hit as high as 16%.

But when something looks too good to be true, it probably is.

Vector Group's large dividend outstripped the company's earnings -- as evidenced by its payout ratio. In the third quarter of 2019, Vector Group reported $0.23 in net income per share while distributing $0.40 per share, giving the company a payout ratio of 174%.

The dividend was so large that it almost eclipsed operating income -- a measure that doesn't subtract interest expense or taxes. Operating income for the nine months ending Sept. 30 was $186 million, while dividends paid over that same period totaled $170 million.

The interest expense for that period was $103 million, with total long-term debt of $1.2 billion. As if that weren't bad enough, management has decided to issue an additional $230 million in long-term debt at a 10.5% annual rate. Moody's rates the bonds "Caa1" -- junk with a significant risk of non-payment.

Slashing the dividend: too little too late?

In a move that should come as no surprise, Vector Group's board announced that it would be reducing its quarterly dividend from $0.40 per share to $0.20 per share and eliminating the annual stock dividend. This would give Vector Group a yield of 6.15% at $13 per share.

While slashing the dividend should significantly improve Vector Group's cash flow, the $0.20 payout is still unlikely to be well covered by EPS or operating income, because the company simply doesn't have compelling top-line growth prospects.

While Liggett Group, Vector's discount tobacco brand, is successfully taking market share from larger rivals, there isn't much organic growth potential in the U.S tobacco market. This year, Liggett managed to boost revenue by increasing prices, but a discount brand can only increase prices so much before it loses appeal to customers. On top of this, a recent U.S. decision to raise the smoking age to 21 will also challenge the industry.

Vector also has a real estate arm, where the top line is growing steadily -- but it isn't contributing much to EBITDA. Douglas Elliman, the company's wholly owned real estate brokerage, generated $784 million in revenue, only $10.5 million of which became EBITDA, over the past 12 months. The real estate segment has incredibly low margins because of the huge amount it pays for real estate agent commissions. This cost eats up around 70% of revenue in a typical quarter. Vector Group is unlikely to generate much cash flow from its real estate business unless it sells assets.

While Vector Group's decision to slash its overloaded dividend is a step in the right direction, the company is still nowhere near able to afford the reduced payout. With mountains of expensive, junk-rated debt and interest expenses ballooning at an alarming rate, the discount cigarette maker probably shouldn't be paying a dividend at all.

Overloaded dividends can be addicting -- and investors will want to avoid the habit.