Global IT services and systems specialist Synnex (NYSE:SNX) reported fourth-quarter earnings after the closing bell on Thursday, but that wasn't even the biggest event of the night. At the same time, the company also said that it plans to split into two separate publicly traded companies in the second half of 2020.

Here's what you need to know about the earnings report and spinoff announcement.

Synnex's fourth-quarter results by the numbers

Synnex breezed past Wall Street's earnings and revenue forecasts thanks to 17% higher sales in the technology solutions division and a buyout-based revenue boost of 25% on the business services side. Most of the outperformance occurred in the U.S. market, while other geographies largely performed as expected. Synnex's profit margins widened in 2019 thanks to synergies from the Convergys buyout, and that integration process was completed ahead of schedule.

On the earnings call, CEO Dennis Polk explained that Convergys is growing while the IT services market generally suffers restricted order growth in an uncertain economic climate. The company invested in hiring more salespeople and engineers while others were just cutting expenses, and that audacious move is paying dividends.

The company's broad portfolio of systems and services also opens the door for cross-selling additional products to existing clients.

"Our integration and system design business, we've been able to cross-sell additional services to that customer set which are more distribution-like, more supply-chain-like services, and we benefited by that again as well in the quarter," Polk said.

Looking ahead, Synnex expects adjusted first-quarter earnings of approximately $3.13 per share on sales in the neighborhood of $5.39 billion. The analyst consensus for that period calls for earnings near $2.94 per share on sales of roughly $5.37 billion, making this a textbook beat-and-raise report. On top of all that, the company also raised its quarterly dividend from $0.375 to $0.40 per share. That's a 7% increase, effective from the next payout on Jan. 31. 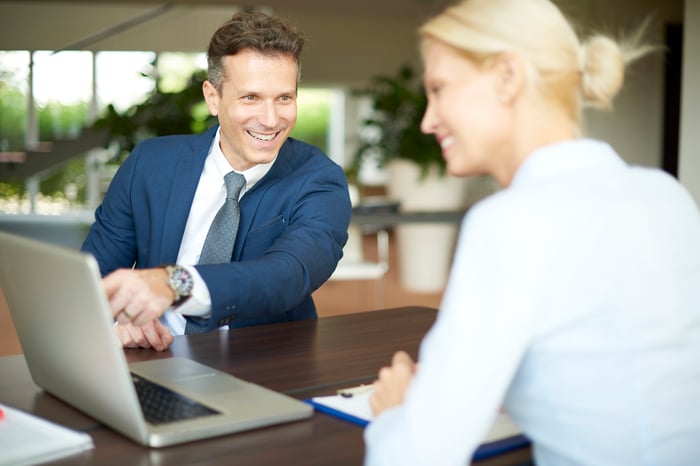 Synnex's business is humming along nicely, and the stock delivered a market-beating return of 51% over the last 52 weeks (as measured at Thursday's market close). The company had been thinking about separation for some time, aiming to stabilize the Convergys acquisition before taking any dramatic steps. The early integration of that business accelerated the timeline for a split.

When the split happens, a special dividend will match each Synnex share with a newly printed share of Concentrix, as the business services division is known. Assuming no game-changing alterations such as regulatory concessions along the way, the new Synnex should command an annual revenue stream of roughly $19 billion, while Concentrix's annual sales stop near $4.7 billion. Each business ranks near the top of its chosen industry, which should make for a smoother transition into a new operating structure.

The companies will obviously continue to work closely together, but they are also free to partner up with other providers of hardware and services from time to time. There might be fewer cross-selling and upselling opportunities under this structure, but each company will have greater freedom and flexibility to pursue separate long-term goals.

Buy at the high?

The market was quick to embrace this one-two punch of strong results and a long-awaited business separation. Investors and analysts had been asking Synnex about a move like this for years, and now the time has come to actually take that step.

Share prices surged nearly 9% higher in after-hours trading. The stock is setting fresh all-time highs at that level. This might not be the most effective buy-in point in Synnex's history, but the company just provided more evidence of its high-quality operations alongside a two-pronged plan to make the most of the years ahead. It's better to buy a great company at a fair price than settling for a fair company at a great price, so I wouldn't mind taking a closer look at Synnex right now.