Please ensure Javascript is enabled for purposes of website accessibility
Log In Help Join The Motley Fool
Free Article Join Over 1 Million Premium Members And Get More In-Depth Stock Guidance and Research
By Timothy Green - Jan 10, 2020 at 8:10AM

The technology holds the promise of solving complex computational problems much faster than traditional computers.

It will likely be many years before quantum computing is widely used for real-world applications. While traditional computers operate on bits which are either 0 or 1, a quantum computer's qubits exist as some combination of those two states. This opens up the possibility of doing certain types of calculations exponentially faster than a traditional computer, but it also introduces a wide array of challenges that must be overcome.

International Business Machines (IBM -2.47%) is one of the tech companies leading the way on quantum computing. IBM now offers cloud-based access to 15 quantum computers for clients to explore potential applications for the technology, including an industry-leading 53-qubit system.

While quantum computing is a long way from being a meaningful revenue-generating business for IBM, the company is growing its customer base. On Wednesday, IBM announced that over 100 organizations are now working with the company's quantum computers. These include major companies, research labs, and start-ups. 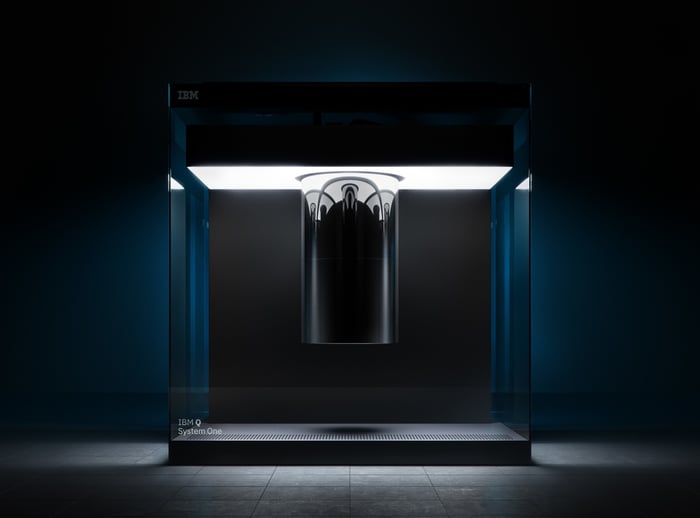 A wide variety of potential applications

While it's unclear what quantum computing will ultimately be useful for when the technology matures, organizations are exploring many possible applications. Anthem is working on producing personalized treatment options and predicting health conditions, while Delta is exploring how the technology can be used to improve the customer experience and solve day-of-travel challenges.

IBM's plan is to put its quantum computers out into the world and allow clients to explore the possibilities. "IBM's focus, since we put the very first quantum computer on the cloud in 2016, has been to move quantum computing beyond isolated lab experiments conducted by a handful of organizations, into the hands of tens of thousands of users. We believe a clear advantage will be awarded to early adopters in the era of quantum computing and with partners like Delta, we're already making significant progress on that mission," said Dario Gil, director of IBM Research.

It's far too early to say anything about the commercial potential of IBM's quantum computing business. But the company is clearly making strides as it works to bring the technology mainstream.

Right now, earnings are all that matter

IBM's quantum computing efforts may eventually pay off, but for investors, the company's upcoming earnings report is the only thing that matters. IBM is scheduled to report its fourth-quarter results after the market closes on Jan 21. Front and center will be the company's guidance for 2020, which will include the impacts of the acquisition of Red Hat and a recently launched mainframe.

While accounting rules will prevent IBM from recognizing all of Red Hat's revenue in the fourth quarter, that headwind will ease as 2020 plays out. Barring catastrophe, IBM should return to growth this year, although the jury is still out on whether that growth will be sustainable.

Quantum computing may someday be a big part of IBM's business. Today, the focus is on hybrid cloud computing, artificial intelligence, data analytics, and other growth areas. IBM will need to tell a compelling story and report decent numbers to impress investors later this month.