Please ensure Javascript is enabled for purposes of website accessibility
Log In Help Join The Motley Fool
Free Article Join Over 1 Million Premium Members And Get More In-Depth Stock Guidance and Research
By Will Healy - Jan 10, 2020 at 8:28AM

When Square (SQ 8.52%) reports its 2019 earnings on February 26th, analysts predict profits of 78 cents per share, a 66% increase from the 47 cents per share the fintech company earned in 2018. Unfortunately for long-term investors, this has not appeared in the stock price. Square stock trades near its year-ago levels of around $64 per share, about 38% below its all-time high.

Despite the plunge in its stock price, Square's earnings have risen significantly since the price peaked. This appears to have made the stock a better buy. Although the company still faces formidable competition, its evolution into an ecosystem with the potential to dominate finance could make Square a compelling long-term buy. 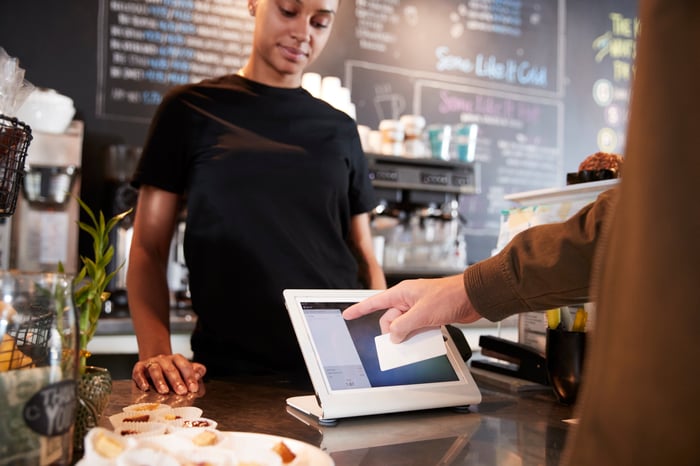 The growth of Square

Square started in 2009 when a friend of founder Jack Dorsey could not complete a sale due to an inability to process credit cards. This inspired the creation of the company's first product, the Square Reader, which allowed any individual or business to accept credit card payments. It also began a fintech empire that would go on to encompass Square Register, Square Payroll, the Cash App, and other functions that have evolved to form Square's tech ecosystem.

Why does this burgeoning fintech empire matter? Because analysts expect mobile transactions to comprise 88% of all banking transactions eventually. Also, Goldman Sachs estimates that the value of the fintech industry is $4.7 trillion worldwide.

Square still offers ample room for international expansion. For now, the company serves only the U.S., Canada, the U.K., Australia, and Japan. Square's combined footprint within the five countries amounts to just over 580 million people. This leaves ample opportunity for expansion across the world. A move into either China or India alone would more than triple the number of customers served.

The Square Ecosystem brings to mind the power of Apple's iOS or Alphabet's Android operating systems. Companies who previously offered products such as cameras or GPSs either died or found themselves at a serious competitive disadvantage. What producers once sold as a stand-alone product became just another feature on the smartphone. In the same manner, Square's ecosystem could have the same effect on fintech.

PayPal and other competitors

However, PayPal (PYPL 5.96%) has attempted to build a comparable ecosystem of its own. It pioneered online money transactions long before the advent of the smartphone. Since its spinoff from eBay in 2015, it has built an ecosystem primarily through acquisitions.

In 2013, it bought Braintree, who created Venmo, which is now the primary peer of Square's Cash App. Some of the other notable purchases include Xoom, which enabled PayPal to process international money transactions. More recently, PayPal purchased Honey, which provides cash back and online services.

As an up-and-coming disruptor, Square appears more expensive at first glance. Square trades at a forward P/E ratio of just above 65. This compares to PayPal, which trades at only about 31.5 times earnings. However, analysts predict average annual profit growth for the next five years of 40.25%. This compares to PayPal's projected average increases of 18.38% over the same period. Interestingly, this gives Square a lower PEG ratio, about 1.61 for the San Francisco-based fintech company versus 1.71 for PayPal.

Square has numerous other competitors in specific areas. NCR competes with Square Register, while Square Payroll came in as a peer of ADP. Still, except for PayPal, these companies have mostly limited themselves to one type of financial service.

What banking could mean to Square

However, the one financial service that could fundamentally change Square and possibly all of fintech is the long-sought bank charter. The company began its mission to obtain an industrial loan company (ILC) charter in 2017. ILCs allow commercial firms to offer banking and niche financial services. In 2018, it withdrew the application before filing a second one later that year.

Getting permission to act as a bank has proven difficult. Companies such as Walmart have tried and failed to obtain ILC charters in the past. However, many analysts believe that Square's position as a financial services firm may ultimately help it to become successful.

Such a move could prove transformative. If banking became a part of the Square ecosystem, it could provide a seamless environment where banking, payroll, investments, transactions, and other financial services can take place under one umbrella. As mentioned before, single-function financial services companies could also lose customers. This includes institutions that have existed for well over a century, such as Citigroup or Bank of America, who could suddenly face a competitive disadvantage.

Should you buy Square stock?

The prospect of an all-encompassing finance ecosystem makes Square stock an intriguing buy. The company's increasing array of offerings brings together functions previously performed by separate companies. This has helped to draw interest to Square stock. Moreover, the fact that it does not serve much of the developed world or any of the developing world offers massive potential for growth.

Furthermore, Square has realized much less of its potential growth than has PayPal. While it may have a higher P/E ratio than PayPal, Square appears to make up for the high multiple with growth.

However, the biggest game changer could come if Square could add banking services. The current regulatory environment has made this move difficult. However, if they could also offer banking services, it would provide businesses with a vast array of financial services in one ecosystem. This could place intense competitive pressure on some of the oldest financial institutions. More significantly, it could also lead to both investors and customers viewing Square as the iOS of finance.