Macy's (NYSE:M) earned itself a post-holiday gift as its shares gained over 6% in the opening days of 2020. A solid chunk of that rally came after the company reported holiday sales that fell less than analysts expected. But this is not the beginning of a real turnaround for the stock, which lost 43% last year, as the report doesn't address the headwinds in the struggling department store's path.

Macy's, like its peers, still faces the major threats of online and off-price competitors, as well as the fact that malls, the location of most department stores, are losing customers. 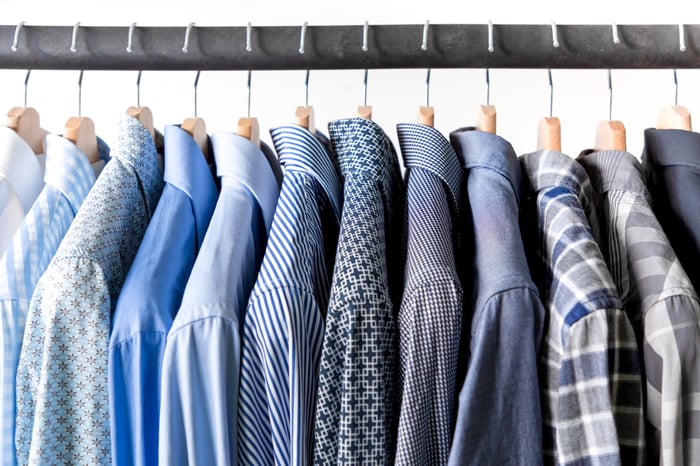 Macy's said that same-store sales for November and December fell 0.7% in owned stores and 0.6% in owned plus licensed stores. Analysts had been expecting a decline of more than 1.7% for the fourth quarter, which includes the holiday period plus an additional month. The retailer's message was optimistic, with chairman and chief executive officer Jeff Gennette saying the period "reflected a strong trend improvement from the third quarter" and noting good performance in the digital business.

In the third quarter, Macy's reported same-store sales declines of 3.9% for owned stores and 3.5% on an owned plus licensed basis. During the earnings call, management said that the growth of its digital business slowed but didn't offer specifics as it did in the previous quarter, when it said digital growth was in the double digits.

While the less-than-expected drop in holiday sales is encouraging, it's not necessarily indicative of a sustainable trend for the company. Macy's followed up on that news by announcing the closure of 29 stores as part of an annual review. The company currently has about 680 stores under the Macy's and Bloomingdale's banners and 190 specialty stores that include off-price outlets. The store closures are meant to eventually improve earnings, but it doesn't send a positive message to investors regarding the company's outlook for the business. Now add to that the challenges that have been nipping at Macy's heels for some time, and the department store remains a risky bet for investors.

Though Macy's and its department store peers are now e-commerce players themselves, they've struggled to stand toe to toe with online giants like Amazon. This is a serious problem when considering the latest consumer trends -- online sales grew more than 18% over the holiday season compared with the same period a year ago, according to Mastercard SpendingPulse. And while department stores got in on the action with online sales growth of 6.9%, their overall sales dropped 1.8%, the report showed.

Macy's has also made efforts to compete with off-price rivals by creating its own off-price presence. Macy's Backstage is located in select Macy's stores, and in some locations exists a a stand-alone store. The retailer said Backstage sales beat its expectations in the third quarter, and it noted that in 2018, 15% of customers shopped both Backstage and the main store. The positive here is that this offers Macy's a way to compete across a broader swathe of the market. The bad news is that Backstage likely won't be enough to lift sales at Macy's main stores in a meaningful way. A report by the International Council of Shopping Centers showed that 73% of consumers who shop at off-price retailers prefer them to other stores. This indicates that some shoppers may go to Backstage specifically, because it is an off-price brand, but they won't necessarily shop at the main store.

The location of department stores, including Macy's, is another problem that isn't going away. Though Macy's is probably most associated with a stand-alone store -- the flagship Macy's Herald Square in Manhattan -- many locations are tied to shopping malls, which have seen declines in foot traffic over the years. In a 2017 report, Credit Suisse analysts wrote that they expect 20% to 25% of malls to close by 2022.

Recommendation of hold is wise

Though Macy's forward price-to-earnings ratio of just seven seems like a deal compared to its valuation of more than 20 only three years ago, all of the factors weighing on earnings prospects should keep investors away, at least until the retailer proves it can overcome these challenges long term. Macy's plans to talk about its three-year strategy during its Feb. 5 investor day, and if investors like what they hear, this could give the company and stock a fresh new direction.