AstraZeneca (NASDAQ:AZN) announced on Monday that it was discontinuing the phase 3 Strength clinical study evaluating Epanova in reducing cardiovascular risk. The British drugmaker said that the decision was made after the study's independent data monitoring committee determined that there was a "low likelihood" that Epanova would help patients with mixed dyslipidemia (MDL) who are at risk of cardiovascular disease.

Epanova won U.S. Food and Drug Administration (FDA) approval in 2014 for treating adult patients with severe hypertriglyceridemia, a condition where patients have triglyceride levels of at least 500 mg/dL. AstraZeneca picked up the drug in 2013 with its acquisition of Omthera Pharmaceuticals. 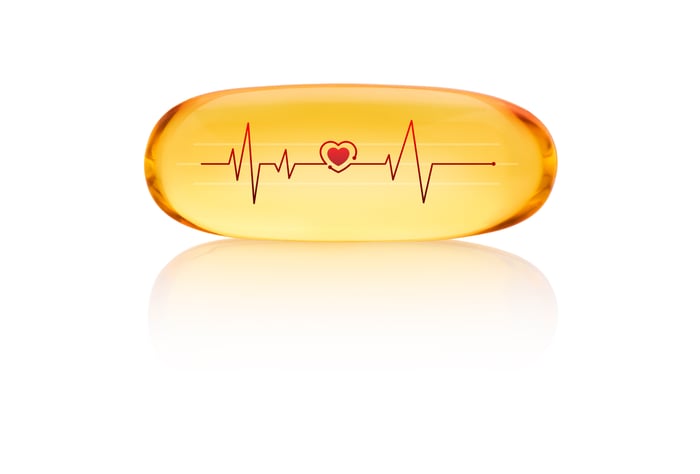 But Epanova faced intense competition from several other prescription fish-oil drugs on the market. It also faced legal challenges, with Amarin (NASDAQ:AMRN) suing AstraZeneca over alleged patent infringements. Further, Epanova didn't become a commercial success. The drug's sales were never high enough to even warrant a mention in any of AstraZeneca's annual regulatory filings.

AstraZeneca undertook the large-scale Strength study in hopes that it could position Epanova as a drug that could reduce cardiovascular risk. The drugmaker enrolled 13,086 patients at 675 sites in 22 countries. However, the discontinuation of the study means that Epanova won't become the big winner AstraZeneca hoped it would be.

The bad news for Epanova was good news for Amarin. The drugmaker received FDA approval in December 2019 for an updated label for Vascepa indicating that it reduces cardiovascular risk. Analysts expect Vascepa will generate blockbuster sales with this new label -- and it now won't face competition from AstraZeneca.