In a month that can often see impressive gains in stock prices, Tuesday was not a January trading day to remember. The market's various indexes generally traded sideways or slightly down. Few stocks were outstanding or even notable in their movements across the day.

That is, unless they were one of these two beauties. Read on for how and why these winners rose notably higher on the day. 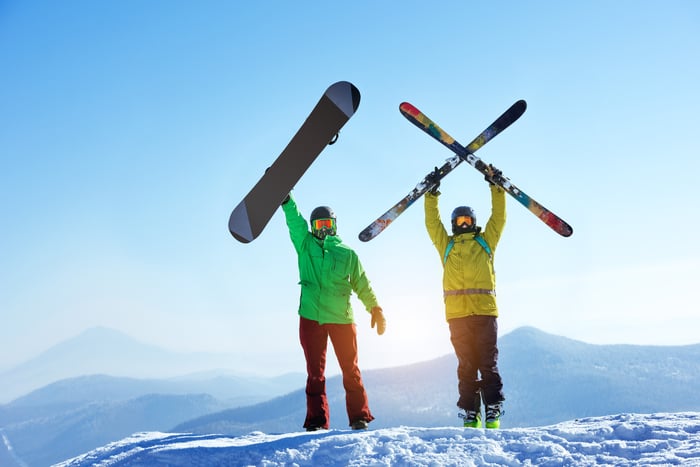 Tilray (NASDAQ:TLRY) shareholders had a better trading day than most of us. The stock was quite the outperformer, even among other Tuesday highfliers.

Investors were very happy that the company managed to snag not one, but two new top-level executives with experience in the trenches of big, publicly traded companies.

New exec No. 1 is Michael Kruteck, the incoming CFO. Prior to serving in the same role for privately held retailer Pharmaca, he did a tour of duty at Molson Coors in a selection of executive roles. When he takes up his new post, he'll displace current CFO Mark Castaneda, who will take on a business development role at Tilray.

The second new member of the marijuana company's C-suite is Jon Levin, who is to occupy the COO throne. Levin comes to Tilray from publicly traded cosmetics major Revlon, where he served as general manager for U.S. mass markets.

It's certainly admirable and encouraging that Tilray, a struggling operator in an industry experiencing many growing pains, can attract seasoned top-level managers from "legitimate" sectors of the consumer goods space. This doesn't paper over the fact, though, that the company has numerous internal and external challenges it still needs to overcome.

Nevertheless, buoyed by optimism from this pair of new hires, Tilray stock rose a mighty 22% in price on the day.

A convincing earnings beat is the reason for Delta Air Lines' (NYSE:DAL) gain in share price altitude on Tuesday. The stock rose to close just over 3% higher.

The airline reported its Q4 of fiscal 2019 results. During the period, the company took in $11.4 billion in revenue, representing a 6% year-over-year increase. Non-GAAP (adjusted) net income was just under $1.1 billion ($1.70 per share), for a sturdy 24% improvement.

That performance exceeded analyst estimates. On average, prognosticators were expecting slightly less on the top line and only $1.40 for per-share net profit.

Delta benefited from continued strong demand for air travel, backed by a U.S. economy that continues to motor ahead. That momentum should last; in Delta's Q4 conference call discussing results, the company said it expects continued brisk business from not only individual consumers, but also from the corporate segment.

For the current quarter (Q1 of fiscal 2020), Delta anticipates revenue growth of 5% to 7%. It didn't provide an estimate for net profit.

Americans and many other aspiring travelers around the world are relatively flush these days -- as is that vaunted corporate segment -- so Delta's expectations for continued robust demand seem realistic. A 3% share price bump on the back of results feels modest to me, so I'd expect this stock to climb higher.