Despite an increasingly hostile retail environment, home-goods supplier Williams-Sonoma (NYSE:WSM) saw an excellent third quarter. Now, it has its eye on the ball as it enters into the new year with a solid plan to stay the course and see greater gains.

You could say that Williams-Sonoma hasn't changed all that much and the rest of the shopping world is finally catching up. In that way, Williams-Sonoma was a harbinger of future retail trends and was positioned correctly for the digital onslaught. But of course, it's about much more than simple luck that helped it stake its current place as a growing company.

These are some of the key elements of how the company has sustained growth over the past year and the plan for continued progress in the coming year. 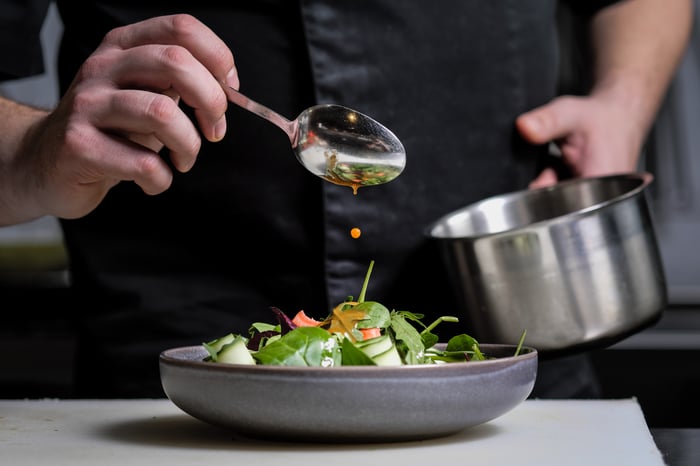 The company started out with one small specialty shop and has grown to 625 stores including all of its brands. It brought in $5.67 billion in revenue for fiscal year 2018. Plus, having pre-empted the current foodie culture, Williams-Sonoma now benefits from its organized supply chain and a large assortment of unique kitchen products. Here's how the company has performed over the past four quarters:

The company is still somewhat of a small fish when compared to competition like Bed Bath & Beyond, which had $2.76 billion in sales during its dismal 2019 third quarter. But Williams-Sonoma is one of the top 25 online retailers in the U.S. With most sales still happening in-store, but the most growth happening online, that spells tremendous opportunity for this company.

Williams-Sonoma has made several acquisitions that have helped it grow its top line without sacrificing the boutique feel that has been a large part of its success. It operates under six different brands that each pull in a different target and this philosophy positions it for incremental growth in each sector.

"As the world's largest design-led, digital-first home retailer, we are shaping the future of shopping," company representatives said in an investor presentation last year. That's a big statement from a small company.

Cross-brand customers, who account for 30% of the total, spend four times more than single-brand customers. The company is cultivating this group through a collective registry, reward program, and design initiative. The reward program is a key sales driver, with 6.4 million members who spend three times as much as other customers.

Williams-Sonoma positions itself as a "digital-first company with retail stores as a competitive advantage." It's aggressively building an omnichannel backbone across several brands that serves to unify the platform while satisfying the consumer's differing needs.

It also gives the company flexibility as to where to focus its assets. The downmarket West Elm brand is where it sees its greatest growth, in contrast to the anchor Williams-Sonoma brand, which is its only division that saw declines in comps for the third quarter.

The company sees big opportunities in business-to-business, with $36 billion in relevant untapped market, and it's pursuing accounts in several industries.

A more exciting goal is global. Most large companies or ones that have aspirational growth have realized at this point that global is where it's at. Two good examples of this trend are Nike and Starbucks, both of whom are seeing high sales in global markets. Williams-Sonoma sees an addressable market of $330 billion, most notably in Western Europe and Asia, where it's already operating.

There isn't too much to dislike about this company, and investors agree, with the stock price gaining 45.6% in 2019. It gives a nice dividend and has a trailing price-to-earnings ratio of 17.36, so it's still a good buy as the company keeps on executing its plan.