Shares of Tyson Foods (NYSE:TSN) climbed 70.5% in 2019, according to data from S&P Global Market Intelligence, as the protein-focused food leader became a primary beneficiary amid the fallout of an African swine fever outbreak in China. Tyson also launched a new plant-based food offering under its "Raised & Rooted" brand.

To be sure, the bulk of Tyson Foods' gain last year came in the first half, when shares steadily sizzled more than 50% higher amid an African swine fever epidemic that -- according to recent USDA estimates -- decreased Chinese pork production by 14% in 2019, which in turn sent pork prices soaring more than 60%. 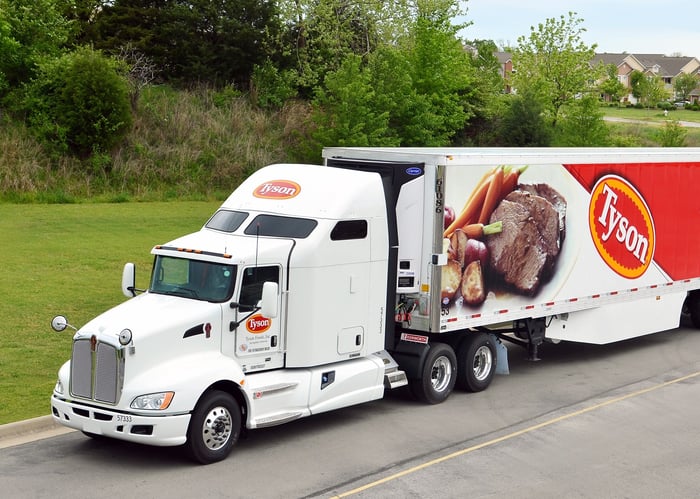 In a company blog post in May, Tyson Foods CEO Noel White called the outbreak an "unprecedented event," noting that each of Tyson's pork, chicken, and beef businesses was poised to benefit from the event -- with the latter two primarily gaining ground as consumers turn to substitute protein sources.

Tyson only further fueled its momentum with the introduction of the Raised & Rooted plant-based food brand in June. But unlike some newer market entrants like Beyond Meat, Tyson management cautioned that the move wasn't part of a broader effort to eliminate its real-meat products, but rather a supplemental offering to meet alternative protein demand.

Sure enough, Tyson Foods stock only continued to rise in the second half -- including a nearly 8% single-day gain in August as the company posted better-than-expected third-quarter earnings. At the time, White suggested the impact of the China's hog and pork supply losses would likely turn into a "multi-year event."

As it stands, Tyson most recently told investors it expects to meet or exceed its longer-term earnings target for high single-digit growth in adjusted earnings per share for fiscal 2020.

We'll see whether Tyson Foods remains on track to achieve that goal when it releases first-quarter 2019 results early next month. But given the tailwinds and product diversification Tyson enjoyed last year, I think the top consumer staples stock responded appropriately in 2019.