The relationship between Sonos (NASDAQ:SONO) and Alphabet (NASDAQ:GOOG)(NASDAQ:GOOGL) is souring fast: The speaker maker has sued the tech giant for stealing its speaker technology.

Sonos CEO Patrick Spence accused Alphabet's Google of "blatantly and knowingly copying our patented technology in creating its audio products" and not only wants monetary compensation for the theft, but is looking to have Google's own smart speakers banned from the market -- as well as Google's phones, tablets, and laptops that use the technology. It has filed suits in federal district court and with the U.S. International Trade Commission.

The speaker maker alleges that Amazon.com (NASDAQ:AMZN) also stole its technology, but says it doesn't have enough money to sue it, too. 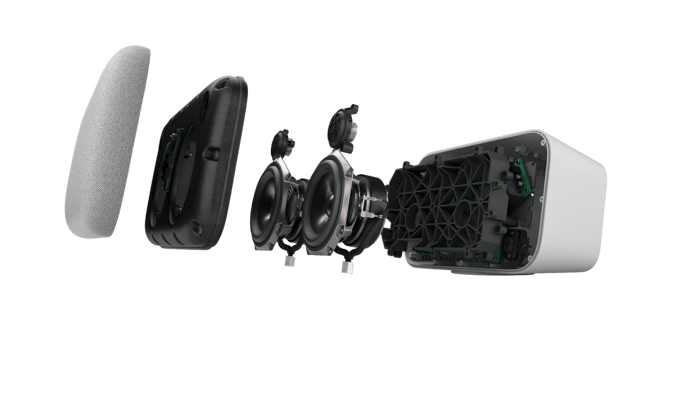 Sonos says Google's Home Max speaker is one of the devices that uses its patented technology. Image source: Google.

Sonos relies on the artificial intelligence capabilities of both Google and Amazon to keep its speakers competitive on the market. At the time, Sonos partnered with the tech companies to include their respective Google and Alexa virtual assistants, neither company made their own speakers.

A New York Times story, which first reported the lawsuit, says Sonos claims it naively turned over to Google what were effectively the blueprints for its speakers in 2013, and the search giant quickly used the opportunity to steal the plans, introducing its own speakers in 2015. Since Google sells them at significantly discounted prices, those speakers have undercut Sonos' own sales.

Sonos speakers were the first to allow users to wirelessly connect speakers in multiple rooms and control them with a single device -- technology for which Sonos has won over 750 patents. The company says in court filings that it discovered Google was using its technology when the tech company released Chromecast Audio, a wireless, multiroom sound system. Since then, Google has expanded use of the patented technology by including it in over a dozen products, such as the Google Home, Home Mini, and Home Max speakers as well as Pixel phones, tablets, and laptops.

One battle at a time

Sonos says Amazon's Echo speakers also use the same technology, but since taking on two of the biggest tech giants in court at the same time would be an expensive effort, Sonos is concentrating its fire on Google. And it's an opportune time to do so, since big tech has fallen out of favor with politicians from both political parties. Sonos was just invited to testify this week before a House committee investigating big tech antitrust violations.

Both Google and Amazon deny the Sonos allegations. Google says it wishes the speaker maker had continued negotiating with it and not turned to the courts. Amazon says its Echo speakers were developed independently.

The potential for static

It's obviously risky for Sonos to sue Google and accuse Amazon of theft. Both companies could restrict Sonos access to their virtual assistants, something Sonos alleges Google has already attempted after it proposed Sonos provide 45-day advance notice – a period Google later increased to six months – for any products in which it plans to use Google Assistant. The advance notice also gives Google a competitive advantage to produce its own products to compete against Sonos in the marketplace.

If Google and Amazon prohibited Sonos speakers from using their virtual assistants, it would be devastating to Sonos's sales, as consumers have broadly adopted one or the other in their homes.

Yet inaction by Sonos may have already allowed Google to gain market share and eat into Sonos's sales. Google's speakers are much less expensive than Sonos's, subsidizing their cost by selling ads, services, and products. Moreover, if Sonos doesn't protect its patents, their value to the company is negligible.

Tune in for what happens next

While Amazon remains a target for future litigation, Google is the easier game. Google Assistant use isn't nearly as widespread as Amazon's Alexa and Google's music player ambitions don't have nearly the same reach as Spotify or even Apple Music, both of which are compatible with Sonos speakers.

And if the cases fall in Sonos's direction, it may be more emboldened then to take on Amazon.