The video game retailer is quick to blame cyclical headwinds -- but a better-run business might have fared better.

GameStop's (GME 9.85%) stock recently plummeted after it revealed that its comparable-store sales plunged 24.7% during the nine-week holiday period, marking a nasty deceleration from its 1.5% comps growth a year earlier. Its total quarterly revenue fell 27.5% to $1.83 billion.

GameStop blamed the decline on "overall industry trends impacting the video game industry and driven by an accelerated decline in new hardware and software sales, particularly in the month of De­­­cember."

CEO George Sherman noted that GameStop had "expected a challenging sales environment for the holiday season" as customers delayed their purchases ahead of new console launches in late 2020, but admitted that its sales after Black Friday and throughout December had been "well below" its expectations. 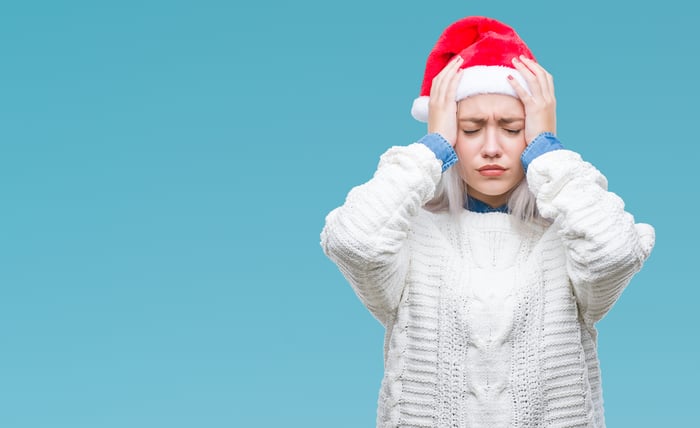 The lone bright spot was GameStop's growth in Nintendo (NTDOY -0.05%) Switch sales during the holidays, which Sherman claims supports the idea that its "sales will strengthen as new consoles and innovative technology are introduced." However, GameStop's weaknesses still outweighed its strengths, and it slashed its comps and earnings guidance for the full year.

It revised its comps guidance from a "high-teens" decline to a 19%-21% decline, and it expects an adjusted net loss for the year -- compared to its prior adjusted earnings forecast of $0.10 to $0.20 per share. That marks the second time GameStop has reduced its full-year guidance over the past 12 months.

Those slippery guidance cuts and GameStop's disastrous holiday sales indicate that the pain isn't over for the struggling video game retailer, which lost nearly 90% of its market value over the past five years as its core business crumbled.

What happened to GameStop?

Over the past decade, GameStop over-expanded its brick-and-mortar presence, recklessly diversified into other markets like mobile devices, consumer electronics, digital games, and collectibles; and failed to keep pace with digital download platforms like Sony's (SONY 3.71%) PlayStation Store, the Microsoft (MSFT 2.26%) Store, and Valve's Steam.

It was also led by three CEOs over the past two years. Paul Raines, who led the retailer since 2010, resigned due to health issues and passed away in early 2018. Michael Mauler was appointed as his successor in Feb. 2018, but resigned just three months later. The CEO position was left vacant until last March when George Sherman took the job. 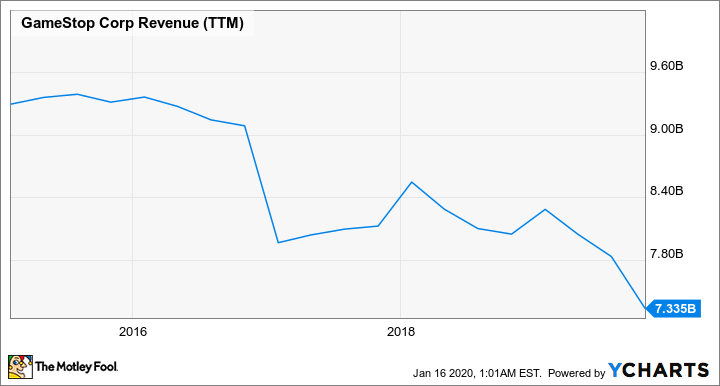 Sony and Microsoft also took steps to cut GameStop and other retailers out of the loop. Sony barred all third-party retailers from selling digital download codes for its PS4 games last year, while Microsoft launched a disc-free version of its Xbox One S. Sony's PS5 and Microsoft's Xbox Series X will still include disc drives, but both companies could launch cheaper disc-free versions as they expand their cloud gaming services.

What about its turnaround efforts?

Sherman claimed that those strategies reduced its operating expenses last quarter, but they clearly aren't generating any fresh revenue growth. Beyond cutting costs, its other plans sound dubious.

It's doubtful that gamers will suddenly consider GameStop stores "social hubs," since most gamers socialize within online games instead of malls. It's also unclear why video game and collectible companies would offer exclusive products to GameStop when shoppers are shunning its stores.

The only real catalysts for GameStop are the upcoming launches of the PS5 and Xbox Series X at the end of 2020. However, customers can also buy those consoles from other retailers -- like Walmart, Target, and Amazon -- so it's doubtful that those consoles will be the magic bullets that reverse GameStop's declines.

GameStop faced tough industry headwinds during the holidays. However, investors should take its excuses with a grain of salt -- since a better-run retailer would likely have weathered those challenges with better comps growth.

For now, GameStop still lacks meaningful ways to reboot its business, and its dismal holiday numbers indicate that it will face a lot more pain throughout 2020.