The global carrier is trimming its exposure as its operations improve.

Delta Air Lines (DAL -3.46%) enjoyed a solid 3% bump in its share price on Wednesday, after reporting fourth-quarter 2019 earnings that included an impressive revenue advance of 6.5% to $11.4 billion, and an accompanying 7.8% improvement in net income, to $1.1 billion. But in line with other airline carriers, Delta has yet to command a premium to the market: Shares trade at just 8 times forward earnings.

Why hasn't vibrant earnings power been reflected in Delta's stock price? Part of investors' hesitation can be traced to a fear that the cyclical airline business will be one of the first industries to suffer should the U.S. economy slip into a recession. Delta has managed, however, to alleviate some of the risk associated with a cyclical downturn. Here, we'll discuss two of Delta's actions that will mitigate the impact of a potential economic slowdown, as well as its work on one additional general business risk, using comments drawn from the company's post-earnings conference call on Tuesday.

1. The risk posed by long-term debt

Delta's investment-grade balance sheet remains an important competitive advantage. Including the debt we raised during the quarter, our leverage ratio was 1.7 times at year-end. This puts us at the low end of our targeted adjusted debt-to-EBITDAR range of 1.5 to 2.5 times.

As airlines build capacity, they tend to load up their balance sheets with long-term debt, and when the industry hits one of its cyclical troughs, declining cash flows often can't meet required debt service, leading to serial airline bankruptcies.

Delta has been fairly careful about adding leverage to its balance sheet. The company's financial debt-to-equity ratio has hovered in a safe zone of 20% to 30% over the past five years. As Jacobson says, Delta's adjusted debt-to-EBITDAR ratio indicates moderate leverage and sits at the lower end of management's debt tolerance range. "EBITDAR" is simply a variation of EBITDA that adds rent (operating-lease payments) back to earnings. Hence the "R" tacked onto EBITDA.

Abundant cash flow from operations is a primary factor in Delta's ability to avoid crippling debt, and it's helped make it one of the few major airlines to carry the enviable "investment grade" label bestowed by major ratings agencies, as Jacobson alludes to. The carrier has generated a cool $8.5 billion in operating cash flow over the trailing 12 months. 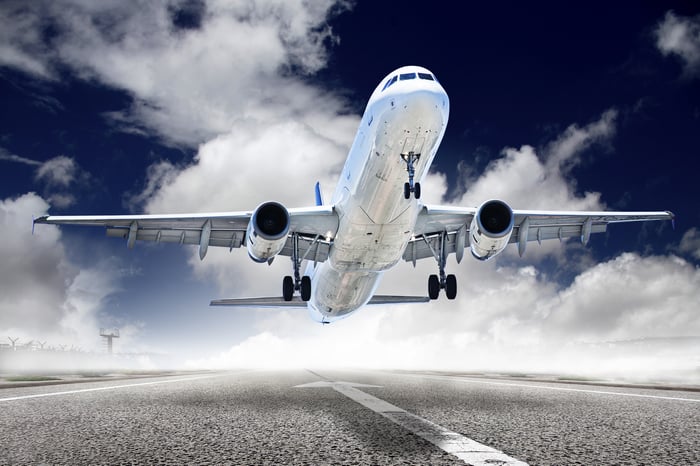 [W]e are actively managing our obligation through a combination of funding and asset returns. In the December quarter, we contributed an incremental $500 million of voluntary contributions into the plan, bringing elective contributions in 2019 to $1 billion. For the year, planned asset returns were about 19.5%, fueled by strength in the U.S. equity markets, which will drive favorability in our 2020 pension expense.

Currently, Delta has about $8.3 billion in pension, post-retirement, and related-benefits liability on its books, versus $9.2 billion at the end of the fourth quarter of fiscal 2018. Management has made it a priority to fund the company's pension and other retirement programs, and to use Delta's generous cash flow to reduce the unfunded portion of its future obligations.

During the earnings call, Jacobson said that the company intends to make another $500 million in elective retirement contributions in 2020. He also pointed out that Delta has improved its retirement funding status by 700 basis points in the last year, to 75%, or about double the funded status at the end of 2012.

Large unfunded retirement liabilities are similar to heavy long-term debt in that airlines often face a cash squeeze when payment obligations must be met during a recession. Delta is using its ample cash generation during this stable period of earnings to reduce the risk (and obligations) that will be present when the next recession arrives.

3. The risk in maintaining an older fleet

With an average age of 15.1 years, Delta maintains one of the oldest fleets among major airlines. This has long been regarded as a competitive advantage and an attractive investment characteristic, as the company's penchant for spending on maintenance and upgrades versus frequent plane replacements has resulted in a high return on invested capital.

But during the earnings call, an analyst posed an interesting question to CEO Ed Bastian. The analyst observed that BlackRock, the world's largest money manager, stated this week that it was increasing its commitment to considering environmental, societal, and governance factors (ESG) in its investments. The analyst wondered if a future need to comply with higher ESG standards would force Delta's capital expenditures to rise suddenly to fund an upgrade to more fuel-efficient planes. Bastian responded:

[W]e take our ESG and, very specifically, our environmental and sustainability requirements and goals to heart ... . It's something that [our] fleet plays a big part of. Candidly, [having a somewhat] older fleet actually has given us opportunities to move faster in that space maybe than others. Every plane we put in -- and we're putting in 80 new planes -- [is] 25% more fuel efficient than the planes that we're retiring.

Bastian also reminded investors that Delta was the only airline to have capped its carbon emissions levels, which it did in 2012 -- and it's followed that year's baseline emissions ceiling ever since. The company's 2020 capital expenditure budget of $4.5 billion includes the delivery of some of the new aircraft Bastian refers to. But by looking more holistically at its carbon footprint, and aiming for long-term emission reductions, the company believes that it will continue to enjoy rather high marks for its ESG efforts, without having to make drastic changes to its fleet composition.