Target (NYSE:TGT) delivered holiday-season comparable-store sales on Wednesday that came in below expectations. After the company released the results, its shares dropped by more than 7% during intraday trading.

It's easy to see why investors panicked. Slower-than-planned holiday sales may suggest that the company is not on the firm financial footing it appeared to be. That, however, is an overreaction, and there's very little (if any) reason to question the retailer's long-term plans. 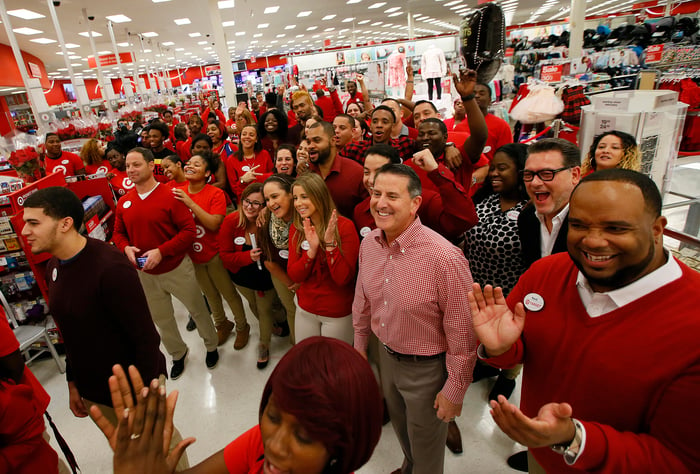 How blue was Target's Christmas?

The retailer saw comparable-store sales for November and December climb by 1.4%. That's down from a 5.7% comp-sales increase during the same period a year ago. The chain acknowledged in a statement that "sales were below expectations."

We faced challenges throughout November and December in key seasonal merchandise categories and our holiday sales did not meet our expectations. However, because of the durability of our business model, we are maintaining our guidance for our fourth-quarter earnings per share. We also remain on track to deliver historically strong full-year results in 2019, including comparable sales growth of more than 3% and record-high [earnings per share] reflecting mid-teens growth compared with last year.

To understand why Target's slower-than-planned growth is not that important, you have to look at where it failed and where it succeeded. The company provided a breakdown of November and December comparable-sales performance by category:

Flat sales in toys, and a tough period for electronics, kept comparable-store sales down. Selling fewer toys than expected hurts overall sales numbers, but it does little to the bottom line because toys are a very low-margin category. Electronics sales were likely down because there's no hot product driving consumer interest.

Cornell gave some context to what went wrong:

We experienced softer-than-expected performance in areas of our business that are critical during the season, including Electronics, Toys and portions of our Home assortment. Because these categories account for a much higher portion of sales during the holidays, they have a larger impact on our overall sales growth as compared to the rest of the year. At the same time, we've seen continued strength and market share gains in Apparel, Beauty, Essentials and Food & Beverage.

Basically, the company was strong in the areas that drive its year-round business and weaker in seasonal categories. That bodes well for the company's bigger picture.

"Given the relative performance of higher-margin versus lower-margin categories, our fourth-quarter financial results will benefit from a stronger-than-expected gross margin mix in our holiday sales," Cornell said. "In addition, our fourth-quarter performance will benefit from productivity improvements in our stores and supply chain, as well as meaningfully lower clearance inventory compared with a year ago."

Target, it's worth noting, did add to its overall share of the toy market during the holiday season. The company also added sales in categories where it's built its business around its proprietary brands.

These results may not look as good on paper as investors expected, but the chain has built a model that can thrive even with fluctuations in comparable-store sales. Target may not have sold as much stuff as it wanted to during the holiday season, but it sold more of the right stuff. It makes money, and that should encourage shareholders.