Please ensure Javascript is enabled for purposes of website accessibility
Log In Help Join The Motley Fool
Free Article Join Over 1 Million Premium Members And Get More In-Depth Stock Guidance and Research
By David Haen - Jan 16, 2020 at 11:39AM

A track record of delivering innovative products continues to drive this company forward.

Bruker (BRKR 0.64%) develops and sells high-end scientific instruments that allow scientists to explore the world at molecular, cellular, and microscopic levels. What does that mean? It means Bruker makes the specialized tools required to answer questions about how our bodies function on the smallest of scales. These specialized instruments, for example, can be used to determine the shape of a certain molecule and how it interacts with other proteins. That information can help scientists create diagnostic tests, discover new drugs, and even determine food quality. 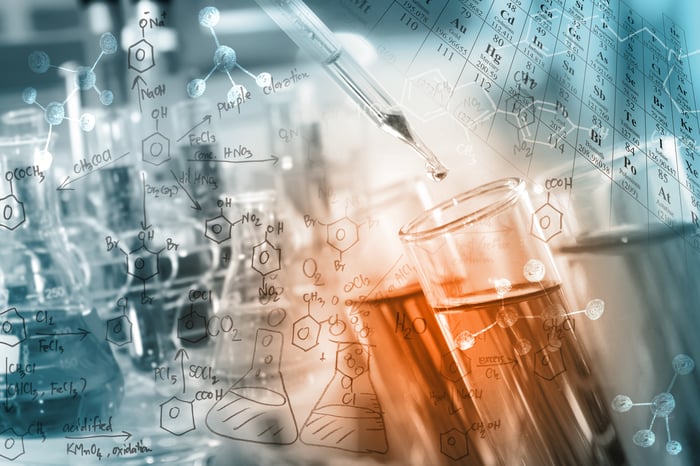 Bruker's CEO and CFO updated investors on Jan. 13 during the company's presentation at the J.P. Morgan Healthcare Conference. President and CEO Frank Laukien commented that while it has not pre-announced earnings for several years, investors can expect the company to achieve near or at the high end of previous guidance for 2019. Further, CFO Gerald Herman stated that revenues continue to grow at approximately an 8% compounded annual growth rate.

At the end of 2019, Bruker restructured much of its debt to provide for greater flexibility going forward. This included replacing its $500 million revolving credit line into a five-year $600 million revolving credit facility. It added a seven-year $300 million term loan at an average effective interest rate of 0.94%. Additionally, because Bruker has global operations, it entered into agreements with a limited number of accredited investors for senior notes totaling 297 million Swiss francs. Finally, the company entered into cross-currency swaps for $205 million of its existing loans. These currency hedges between U.S. dollars, euros, and Swiss francs effectively reduced the loan interest from more than 4.3% to 2.25%.

Laukien, who also owns 26% of the company, spoke enthusiastically about the initial installation of the world's first 1.2 GHz nuclear magnetic resonance (NMR) spectrometer, a product resulting from 10 years of research and development. Scientists use NMR to determine the quantity and purity of molecules in a solution. While NMR machines exist today, this advancement can be likened to the precision of hi-def 4G TV compared to an old CRT set. In his presentation, Laukien noted that Bruker has a roughly five-year head start on any competitor hoping to deliver an equivalent 1.2 GHz NMR.

The company also noted that more than 100 units of its newest technology platform -- called TimsTOF -- for analyzing proteomics were installed in the first two years on the market. Laukien believes the total addressable market could double in the next five to seven years.

On the new product front, Laukien spoke enthusiastically of Sepsityper, which rapidly identifies the cause of sepsis, which is attributed to nearly 270,000 deaths in the U.S. annually. Following a positive blood culture, Sepsityper can accurately determine, in 15 to 20 minutes, which of 425 species of bacteria and yeast is the culprit. Quicker identification can allow doctors to intervene more rapidly, saving patients and reducing the length of hospital stays. The product has been cleared for use in Europe, and Bruker has submitted for clearance from the U.S. Food and Drug Administration. It expects to receive a positive nod from the FDA this year.

The food integrity market provides another avenue for Bruker to excel. While still small in terms of revenue, Bruker's instruments can detect the purity of items such as honey, wine, whiskey, and fruit juices. This kind of detection could prevent future scandals in the food industry, like the 2018 outcry in Australia when it was discovered that as much as 20% of all honey sold in the country had been diluted with rice syrup.

Is the valuation frothy?

Bruker's stock trades just near its all-time high. Should investors worry that its frothy valuation fails to sustain itself? I think the company's track record speaks for itself. Delivering new innovative products on a global scale continues to drive the business forward. Based on the company's ability to grow, make smart financial decisions, and execute, healthcare investors should expect this stock to continue its upward trend.

Why Bruker Corp. Is Crashing 12% Today