The chunky utility vehicle is slated for an electric-only 2021 or 2022 redux.

The notorious Hummer will soon return, a decade after its first incarnation fizzled, thanks to General Motors' (GM 0.81%) aggressive upcoming push into the electric pickup truck and SUV market. The famous nameplate will appear on an all-electric off-road vehicle this time around according to early information. GM plans to launch an assortment of electric pickups and sport utility vehicles, with the Hummer as just one high-profile name. There are several signs this could be a smart move despite the risks.

One of the most distinctive vehicles to appear on America's roads in the 1990s and early 2000s, the Hummer is a civilian version of the military "Humvee." Weighing in at a whopping 6,400 pounds or more, depending on the model, the vehicle was controversial for its environmentally unfriendly fuel efficiency of just 9 to 10 miles per gallon. People bought the vehicle both for its ruggedness and, in particular, a tax rule on vehicles weighing over 3 tons, allowing owners to take large deductions on their taxable income after buying a Hummer.

Hummer sales eventually tailed off, and GM tried to sell the brand to Chinese manufacturers. China's government interfered, the deal fell through, and GM officially ended production in 2010. By then tens of thousands of Hummers were on the road. Their blocky outline had become a familiar presence across America and remains instantly recognizable to this day. 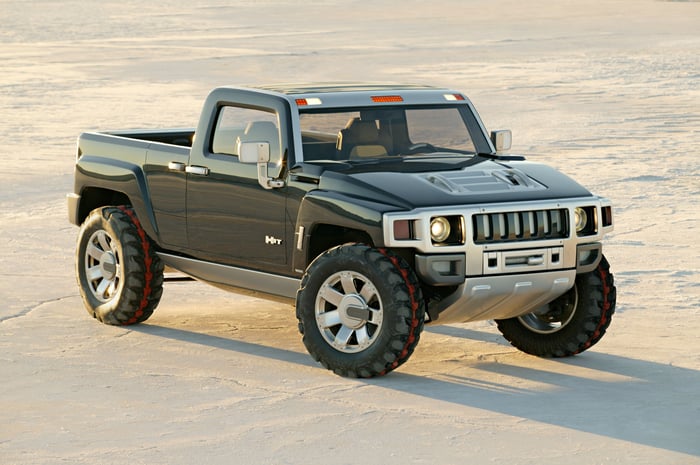 GM is now bringing the Hummer back, transformed into an all-electric truck -- the exact opposite of the ecosystem-ravaging gas guzzler of yore. Besides the nameplate, GM intends to make the vehicle resemble the earlier Hummer, tapping strongly into brand recognition and nostalgia. Specific Hummer models will include a pickup truck -- probably launched first in late 2021 or early 2022 -- and a large off-road-capable SUV.

The seriousness of GM's electric vehicle sector intentions are underlined by two recent multibillion-dollar investments. It recently teamed up with LG Chemical (OTC: LGCLF) to construct a $2.3 billion electric car battery factory in Ohio. According to GM's press releases, the massive facility will produce at least 30 gigawatt hours (GWh) of battery capacity annually, enough to outfit several hundred thousand electric vehicles.  In addition, GM is pumping $3 billion into renovating its Detroit-Hamtramck plant for the express purpose of building electric pickups and SUVs.

GM already specializes in large pickups and SUVs, earning over 70% of its income from these vehicles and controlling approximately 70% of its U.S. market. Such machines offer high manufacturer profit margins, up to 30%. SUVs and pickups are gaining in popularity, with some forecasting SUVs to account for 50% of all new passenger vehicle sales in the U.S. this year. The growth of electric vehicle demand remains more uncertain, but based on buying of minerals used to make lithium-ion batteries, they may represent 8.2% of American auto purchases in 2020. Electric vehicles could make up 40% of sales by 2040.

2022 is an important year for GM to establish its continuing viability in the face of electric pickup and SUV competition. By then the Tesla Cybertruck pickup truck from Tesla (TSLA -0.06%), Byton's Chinese-made M-Byte SUV, and the electric R1T pickup truck and R1S SUV from Rivian Automotive should be in showrooms.

Besides matching its competitors, GM's electric vehicles serve as an important hedge against regulatory changes. California wants to return to emissions standards enacted during the Obama presidency, though Donald Trump's administration may block this. By pursuing both gasoline and electric model development, GM stays competitive in the Golden State no matter what. It also prepares for possible nationwide emissions law changes should they come about in the future.

I think GM is making an excellent choice by naming one of its first major electric pickup releases the Hummer and giving it strong visual cues to match. The Hummer's storied nameplate and distinctive looks, coupled with GM's established presence in the pickup and SUV market, make this a powerful, high-visibility opening move in the electric passenger truck sector. GM is probably a good prospect in both the short and medium term if you're interested in investing in car stocks.