Please ensure Javascript is enabled for purposes of website accessibility
Log In Help Join The Motley Fool
Free Article Join Over 1 Million Premium Members And Get More In-Depth Stock Guidance and Research
By Keith Speights - Jan 19, 2020 at 9:00AM

These stocks skyrocketed during healthcare's biggest event of the year -- the J.P. Morgan Healthcare Conference.

You can count on companies to make major announcements when the J.P. Morgan Healthcare Conference, the biggest event in the healthcare sector each year, is underway. That's exactly what happened over the last week.

But three healthcare stocks soared over 30% last week as a result of their presentations at the major healthcare conference and announcements in connection with those presentations. Here are three of the biggest winners of the "Super Bowl of healthcare" and whether or not they're smart picks to buy now. 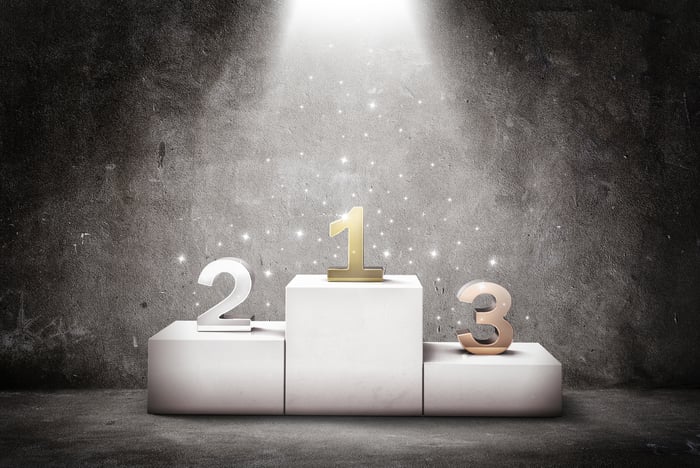 Shares of Mallinckrodt (MNK) skyrocketed 64% last week. The huge gain came after CEO Mark Trudeau said during a session at the J.P. Morgan conference that the company could pay off debt maturing in 2020 with cash and stated he was optimistic that a dispute with Medicaid about pricing for Acthar would be resolved.

The drugmaker's long-term debt totaled more than $5 billion at the end of the last reported quarter. More than $600 million in notes come due this year. While it remains to be seen whether or not Mallinckrodt will actually pay off those notes with cash, the fact that Trudeau thinks the company can do it was viewed as a positive sign by investors.

Acthar is Mallinckrodt's top-selling drug, raking in close to $1 billion in 2019. The company filed a lawsuit last year in an effort to get the Centers for Medicare and Medicaid Services (CMS) to change the way Acthar is priced in the Medicaid program. Trudeau's optimism about a potential settlement was music to investors' ears.

SmileDirectClub (SDC -5.67%) definitely had investors smiling over the last days. The dental-care products company made a major announcement on Tuesday, the same day it presented at the J.P. Morgan conference, stating that it plans to market its clear aligners to dentists and orthodontists. Its stock soared 40% last week on the news.

This marked a big change in strategy for SmileDirectClub. The company is best known for its direct-to-consumer sales approach. An agreement with Align Technology, the leader in the clear aligner market, prevented SmileDirectClub from marketing its products to dental professionals in the past. However, that agreement expired at the end of 2019.

The opportunity is a big one. SmileDirectClub's chief clinical officer, Jeffrey Sulitzer, noted that "of the more than 200,000 licensed dentists and orthodontists in the United States, only an estimated 30% offer clear aligner therapy in their offices."

Endo International (ENDP -8.62%) wasn't too far behind SmileDirectClub, with its shares jumping 32% last week. The drugmaker's CEO, Paul Campanelli, spoke at the J.P. Morgan conference on Monday. His presentation followed Endo's announcement on Jan. 11, 2020, that it had settled opioid litigation with the state of Oklahoma for $8.75 million.

This settlement set the stage for Campanelli to focus on the positives for the company, which has reeled from its involvement in other opioid-related lawsuits. He pointed to strong growth for Xiaflex in treating Peyronie's disease and Dupuytren's contracture. Campanelli also highlighted Endo's plans to launch collagenase clostridium histolyticum (CCH) in 2020 pending an anticipated FDA approval in the third quarter.

In addition, Campanelli said that Endo hopes to launch between 15 and 20 sterile injectables and generic drugs in 2020. Endo is also partnering with ophthalmology-focused drugmaker Nevakar and anticipates the first launch from this collaboration in the latter part of this year.

Are these stocks a buy now?

Endo and Mallinckrodt delivered fantastic performances in 2019 and are off to a great start so far this year. SmileDirectClub, on the other hand, lost nearly half its market cap last year but is rebounding nicely in the first few weeks of January.

At this point, though, I wouldn't call any of these stocks as great picks to buy. Endo and Mallinckrodt aren't completely out of the woods with respect to opioid lawsuits. And while I think that SmileDirectClub could be successful with its core direct-to-consumer strategy and its new efforts to market to dentists and orthodontists, I'd like to see how the company performs in the first couple of quarters in 2020 before taking a harder look at the stock.