Please ensure Javascript is enabled for purposes of website accessibility
Log In Help Join The Motley Fool
Free Article Join Over 1 Million Premium Members And Get More In-Depth Stock Guidance and Research
By Daniel Miller - Jan 20, 2020 at 7:00AM

These companies have demonstrated their payout prowess over the long haul, but many investors likely overlook them.

Dividend stocks are often some of the most recognized and lauded companies in the market. Those companies often achieved such lofty status for good reasons: They generally produce strong cash flows and own durable competitive advantages. But for every well-known dividend giant such as Coca-Cola, Walmart, and Procter & Gamble, there are overlooked stocks that have incredible businesses and dividend track records. Here are three of them.

Even though investors very likely use the company's tools and other products, it may be just as likely they don't realize that Stanley Black & Decker (SWK 4.43%) has built one of the best dividend histories in the market. While its current 1.65% dividend yield won't attract some income investors, its history and consistency are remarkable. Stanley Black & Decker just extended the company's record for the longest consecutive annual and quarterly dividend payment among all industrial companies on the NYSE: It has paid its dividend for 143 consecutive years and increased it for each of the past 52 years.

After a long history of slow and steady top-line growth, Stanley has kicked it into a higher gear over the past decade, in part thanks to the 2017 acquisition of Newell Brands for $1.95 billion and by snatching an incredible brand in Craftsman from a struggling Sears Holdings for $900 million. 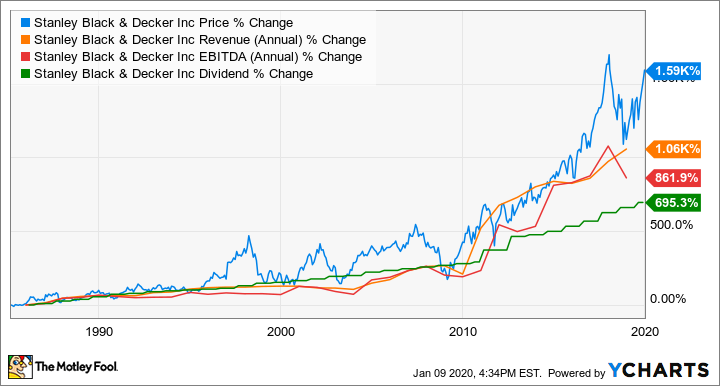 Stanley's acquisitions could accelerate in the near term if global trade tensions remain and commodity prices continue to be unfavorable (among other industry obstacles). The culmination of those factors could provide attractive acquisition opportunities and further industry consolidation.

Management sees uncertainty and industry headwinds remaining over the near term, which is why the company is implementing a cost-reduction program that will deliver $200 million in annual savings. In addition to the cost-cutting, management is also accelerating its $300 million to $500 million multiyear margin initiative, which it hopes will support earnings growth despite industry obstacles.

Stanley Black & Decker has a lot going for investors. It has a list of well-known and valuable brands such as DeWalt and Craftsman, in addition to its namesake brands and others. Management is ready to acquire valuable companies and brands when the time and price make sense. It proactively prepares to cut costs and support margins in the midst of market headwinds. And, despite its payout being mostly unknown to investors, it's one of the most consistent and impressive dividend payers in the markets.

Whether investors realize it or not, McCormick (MKC 2.74%) likely touches their lives on a daily basis. It manufactures spices, seasoning mixes, and condiments, among many other products, and essentially dominates the world of flavoring.

It's also a fantastic dividend stock. In November 2019, the company announced an increase in its quarterly payout from $0.57 to $0.62 per share, which was the 34th consecutive year of dividend increases. It has paid dividends each year since 1925, giving the company a long and consistent history of returning value to shareholders.

But there's more to like about McCormick than just it's dividend: The company has also delivered on many crucial long-term growth objectives. 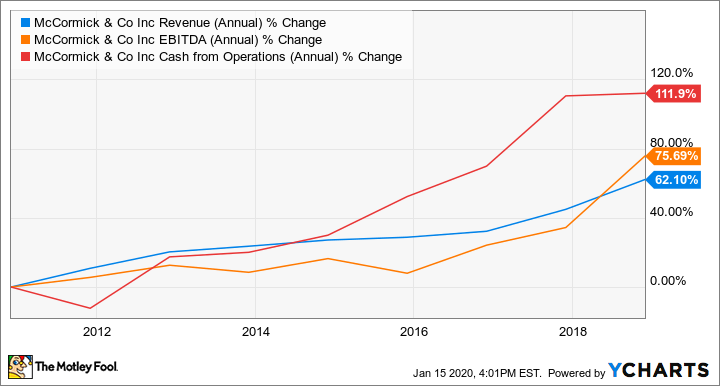 Not only have those three metrics in the graph above improved over the past decade, but McCormick's operating margins have also improved annually since 2015, jumping 320 basis points from 14.2% in 2015 to 17.4% in 2018. Its third-quarter 2019 had even more impressive results as its operating margin reached 19.1%, 170 basis points higher than the prior year's result.

Those metrics underscore the company's competitive advantages through its brands, range of products, scale and market share, and the value it offers retailers as a reliable partner. So while McCormick might be a large company, it still offers investors a spicy growth story that can support earnings and cash flow.

For this to be the long-term growth story that many income investors would prefer, there needs to be strong global demand for its products. At Barclays' Global Consumer Staples Conference last September, McCormick noted a 5% five-year compound annual growth rate in demand for what the company calls its flavor category across the globe. Europe's use of spicy condiments is on the rise, and use in the U.S. has moved from 46% of the population in 2012 up to 54% in 2017. The U.S. consumer is also using more sauces than in the past, with usage doubling over the prior six years. People will always need to eat, and are increasingly seeking new flavors, new combinations, and new dishes -- which is fantastic if you're a producer of spices, sauces, and flavors. 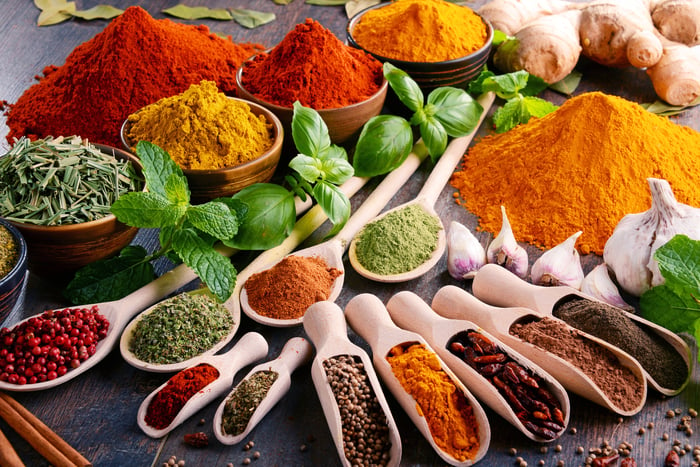 McCormick is the worldwide leader in spice and seasoning market share, and should only improve its position as it focuses on the global consumer demand for new flavors. While many investors may not think of it for its dividend, the company has a long history of returning value to shareholders and will almost certainly continue that trend long into the future.

Similar to the other two stocks on this list, Johnson Controls (JCI 3.25%) isn't the first dividend stock that income investors think of, despite potentially having its products and services all around them. Johnson Controls manufactures, installs, and services HVAC systems, fire and security solutions, and broad assortments of building management systems, among other products. It offers a 2.5% dividend yield with a history of paying dividends every year since 1887, and after a transformation year it could be more enticing to income investors.

Johnson Controls has been an intriguing industrial juggernaut to follow over the past five years. In 2016, it separated from its automotive seating business, now known as Adient (ADNT 6.18%), which reduced the company's exposure to the automotive industry as it headed toward a North America sales plateau. It also joined with building services leaders Tyco that same year, which sent its revenue potential through the roof while also better focusing the company on its core building products.

But it wasn't until last April, when Johnson Controls sold its automotive battery business, that it became a pure-play building company. That sale, which netted roughly $11.6 billion, enabled it to drop $4 billion on debt repayment and $6 billion on share repurchases (management anticipates further share buybacks in fiscal 2020).

All of these moves have better focused its strategy with more exposure to high-margin business, while removing cyclical enterprises and improving its balance sheet.

Johnson Controls capped off its fiscal 2019 with a solid fourth quarter that delivered on its margin and cash-generation goals. After a successful transitional year, it has momentum going into 2020 to execute on its backlog (which grew 8% to $8.9 billion at the end of the fourth quarter) and will continue to return value to shareholders through dividends and share repurchases.

Investors already know how difficult it is for companies to evolve and adapt in a rapidly moving world. Companies collapse or are reduced to obscurity by new and more innovative competitors on a daily basis. That's what makes Stanley Black & Decker, McCormick, and Johnson Controls so impressive: They have some of the longest and most reliable dividend records in the markets. And for income investors, that's amazing.

10 Companies That Have Paid Dividends for More Than 120 Years