Please ensure Javascript is enabled for purposes of website accessibility
Log In Help Join The Motley Fool
Free Article Join Over 1 Million Premium Members And Get More In-Depth Stock Guidance and Research
By Leo Sun - Jan 21, 2020 at 10:30AM

The pinboarding network becomes the third-largest social network in the U.S.

Pinterest's (PINS -7.79%) stock recently rallied after eMarketer declared that the company had surpassed Snap's (SNAP -5.39%) Snapchat as the third-largest social media platform in the U.S. Pinterest's domestic users rose 9% annually to 82.4 million in 2019, while Snapchat's users grew 6% to 80.2 million.

The firm claims that Pinterest users will account for 41.1% of all U.S. social media users this year, compared to a 39.7% share for Snapchat. eMarketer expects the gap to widen as Pinterest and Snapchat hit 90.1 million and 86.1 million domestic users in 2022, respectively.

Those numbers sound promising for Pinterest, but does topping Snapchat in domestic users actually solve its more pressing issues? Let's examine the facts to see if eMarketer's report signifies a hollow victory or a meaningful one for Pinterest. Pinterest and Snapchat generally don't serve the same age groups. Piper Jaffray recently found that Pinterest had an engagement rate of just 25% among U.S. teens, compared to 81% for Snapchat and 85% for Facebook's (META 0.09%) Instagram. eMarketer noted that Snapchat was significantly more popular than Pinterest with users under the age of 35, while Pinterest was more popular among users over the age of 35.

Therefore, Pinterest and Snapchat aren't direct competitors. The two platforms' users definitely overlap, especially among Millennials, but many users probably use both apps concurrently. Instead, Instagram -- which is challenging Pinterest with curated collections and e-commerce features -- is a bigger direct threat.

Pinterest's growth in the U.S. was a major soft spot last quarter. Its monthly active users (MAUs) grew just 8% annually in the U.S., which marked a slowdown from the previous quarter and paled against its 38% growth overseas.

Pinterest's rising international ARPU was encouraging, but that figure only hit $0.13 in the third quarter -- which couldn't offset its slowdown in the U.S. Its domestic ARPU growth also looked poor relative to its industry peers. Snap's North American ARPU rose 43% annually to $3.75 last quarter, while Facebook's ARPU grew 24% to $34.55.

During last quarter's conference call, Pinterest stated that it would boost its domestic revenue by diversifying its advertising base in the U.S., reaching smaller and medium-sized businesses, and developing new ad products. New e-commerce partnerships, which let retailers post their entire catalogs onto Pinterest as pinboards, could also boost Pinterest's ad revenue, widen its moat against rival platforms, and bolster its presence in the "social shopping" market. 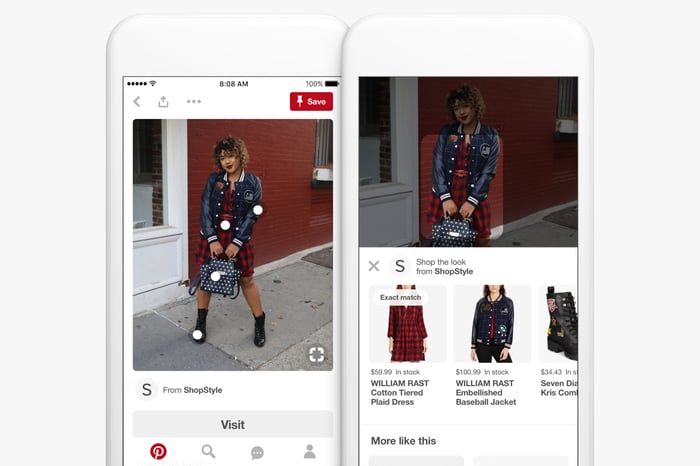 The bulls believed that Pinterest's strategies would bring reboot its growth in the U.S., while the bears claimed that Instagram would render it obsolete. That's why eMarketer's report of Pinterest's 9.1% growth in domestic users in 2019 -- more than double its previous forecast for 4.3% growth -- brought back the bulls.

If eMarketer's estimates are accurate, Pinterest could generate stronger growth in the U.S. throughout 2020. Topping Snapchat in domestic users certainly isn't a hollow victory, but it also isn't that meaningful since the two platforms address different demographics.

Instead, investors should focus on the direct competition from Instagram, Pinterest's lack of GAAP profits, its high stock-based compensation expenses, its low overseas ARPU, and its lofty valuation of nearly nine times next year's sales. Any of those factors could still offset its stabilizing user growth in the U.S.