Please ensure Javascript is enabled for purposes of website accessibility
Log In Help Join The Motley Fool
Free Article Join Over 1 Million Premium Members And Get More In-Depth Stock Guidance and Research
By Anne Burdakin - Jan 22, 2020 at 9:27AM

The airline business is a tough one, and not all carriers survive the cyclical nature and geopolitical challenges. Delta Airlines (DAL 6.68%), an industry leader in 2020, was plunged into bankruptcy in 2005. Management was humbled and the company survived, eventually building itself into one of the most successful airlines of the past decade.

But the party's not over yet. Delta Airlines has put several strategic initiatives in place that will yield increased revenue and improved margins in the next few years.

An important driver of future growth is the partnership between Delta and American Express. The co-branding contract was renewed for 11 years, running to 2029. The agreement increases income to Delta from $4.1 billion in 2019 to nearly $7 billion by 2023. Delta American Express cardholders increased by 1.1 million in 2019, notching the third consecutive year adding more than one million new card holders.

Plans are in the works for Delta and American Express to relaunch the credit card portfolio with new ways cardholders can earn miles, driving new cardmember growth and card usage. 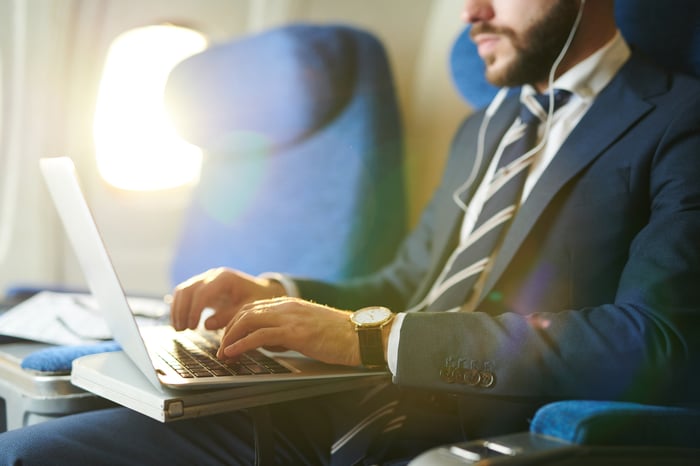 Delta Airlines plans to reduce maintenance costs and boost productivity by simplifying its diverse fleet. Management says the airline could eventually operate just eight fleet families, down from 12 next year. As Delta phases out old airplanes, it is replacing them with higher-capacity aircraft, capitalizing on the high passenger volumes the airline has attracted.

Fleet optimization reduces costs while increasing revenue per departure, making for enviable efficiency. Delta reported 2% fuel efficiency improvement through fleet renewal and other initiatives in 2019. Investment in new aircraft lays the groundwork for stability when the cyclical airline industry slows down.

Delta anticipates significant international growth, making a deal in September for 14 large wide-body Airbus A350s with new strategic partner LATAM Airlines (NYSE: LTM). CEO Ed Bastian said, "This gives us an opportunity to expand our A350 fleet, which we have a relatively sub-scale number of at 15 today."

Finally, Delta's pending joint venture with LATAM, Latin America's largest airline, promises to make Delta as competitive in South America as it is in other international markets.

At present, Delta lacks scale in South America. The partnership with LATAM changes that as Delta gains access to major South American hubs and connecting traffic it hasn't had access to before. This should drive strong revenue growth for Delta as it becomes more appealing to the lucrative business traveler flying between the U.S. and South America.

The joint venture must go through the regulatory review process, which can take a long time. The fact that Delta has such low market share in South America should smooth antitrust approval, though. In the meantime, they intend to start code-sharing this year.

In terms of customer service, Delta is one of the best airlines flying today. It was rated the No.1 airline in the Business Travel News Airline Survey for a record ninth consecutive year.
The airline has strategic catalysts in place for growth, namely the joint venture with LATAM Airlines, the long term co-branding agreement with American Express, and fleet optimization. Those efforts will put it in a stable position for the inevitable cyclical slowdown sometime in the future.
Delta's results for fiscal year 2019 were solid. Adjusted earnings-per-share came in at $7.31, a 30% increase year over year, and total revenue increased to a record $47 billion, up 7.5%. Total expense increased 3.9%, in line with the company's guidance.
Delta shares pay a 2.6% dividend, which has increased steadily since 2013, and trade at only 8.5 times earnings. Considering the strong economy, cost reductions, and profitable partnerships in place for the long term, Delta shares seem like a bargain. All indications are that investors will be well rewarded for years to come.