Please ensure Javascript is enabled for purposes of website accessibility
Log In Help Join The Motley Fool
Free Article Join Over 1 Million Premium Members And Get More In-Depth Stock Guidance and Research
By Will Ebiefung - Updated Jan 22, 2020 at 12:09PM

The stock has started 2020 on a bad note. Will the free fall continue for the rest of the year?

Six Flags (SIX 6.17%) investors are going for a wild ride, with shares in the theme-park operator in free fall after weaker-than-expected revenue guidance. Management expects North American sales to come in softer than expected, while international projects have run into unexpected setbacks.

Investors will have to wait until fourth-quarter results come in Feb. 13 to know the full extent of the damage. But it might still be safe to stay aboard -- Six Flags' international projects aren't a big part of its business, and the fourth-quarter sales decline might not interrupt the company's long-term growth trajectory. 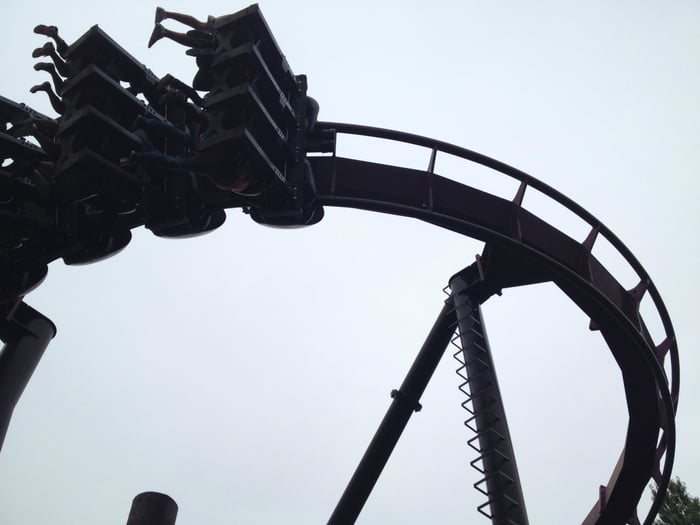 Six Flags started 2020 on a very bad note, posting an almost 20% decline on Jan. 10 -- its worst day on record -- after disclosing severe challenges to its plan to develop parks in China. The announcement was followed by a series of analyst downgrades, with some seeing the potential for a dividend cut.

Six Flags had planned to open several branded theme parks in Zhejiang, China, through its local partner, Riverside Investment Corp. However, on Jan. 10, the company announced the following:

The development of the Six Flags-branded parks in China has encountered continued challenges and has not progressed as Six Flags Entertainment Corporation had expected. The Company's partner in China, Riverside Investment Group ("Riverside"), continues to face severe challenges due to the macroeconomic environment and the declining real estate market in China. This has led Riverside to default on its payment obligations to the Company.

Management also expects North American revenue to decline by 8% to 10% because of weaker-than-expected sales of season passes and memberships.

Six Flags management has been touting its international expansion plans for more than a decade, but the non-U.S. parks always seem to fail. Take, for example, Six Flags Dubai, a park first announced in 2008 that still hasn't seen meaningful progress. As noted in Six Flags' 2010 annual report, the company's partner in the effort, Tatweer Dubai LLC, "failed to make a payment due to [Six Flags]," after which the agreement was terminated.

Management revived plans for the Dubai park in a 2014 press release. But in April 2019, DXB Entertainment, Six Flags' new partner for the project, canceled plans for the park altogether, deciding that it wasn't in its best interest. And it's unclear what will happen in China after the company's partner there defaulted.

So how do Six Flags' international flops look in the context of the big picture?

Six Flags recognized $26.5 million in revenue from international sources -- sponsorships, agreements, and accommodations -- in the third quarter of 2019. Altogether, this only made up about 4.3% of the company's $621 million total revenue in that period. Put plainly, Six Flags' international expansion isn't a big growth driver. The company depends on its continued success in North America.

Six Flags' North American business consists of 26 parks, with 2 in Mexico and 1 in Canada. Revenue grows year over year through organic attendance increases and ticket-price hikes. Management has kept costs under control, with operating margins improving significantly over the past five years.

Most of Six Flags' costs are relatively fixed, and they don't correlate much with its revenue growth drivers. This means margins could continue to improve in the future. 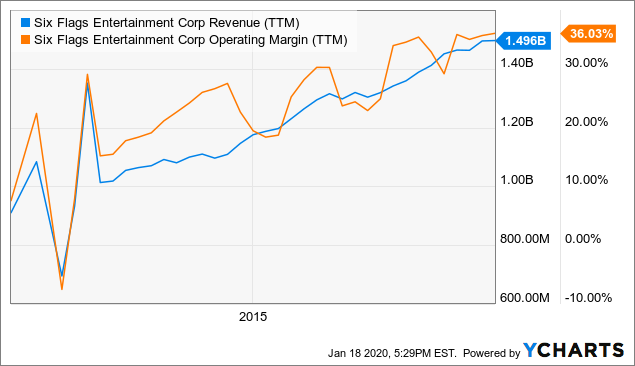 Six Flags paid a dividend of $0.83 per share in the third quarter. Earnings for that period were $2.10 per share, giving the company a payout ratio of 39% for the quarter -- good coverage for the dividend. However, analysts forecast a large drop in earnings for the fourth quarter, meaning that the payout ratio could easily top 100% going forward -- especially with management guiding for lower-than-expected top-line performance.

Six Flags has disbursed $3.28 per share over the trailing-12-month period while earning $3.17 per share over the same time. The dividend coverage has become tighter because the company consistently increases the payout, which is something it doesn't have to do. With a current yield of 8.7%, dividend investors would still enjoy a respectable payout even if it were held constant for several years. If management does decide to stop these increases, the dividend coverage will look a lot better.

How does the ride end?

Six Flags has warned investors of trouble ahead of fourth-quarter results. The company's Chinese expansions are not progressing as anticipated, and North American revenue did not meet expectations.

However, Six Flags' international expansion plans have never been a key growth driver, and the setback in China will have little influence on the company's top line. Investors will have to look to the fourth-quarter results Feb. 13 to see how the company's North American challenges play out. If things stabilize in the fourth quarter, shareholders -- and the dividend -- should be fine.