The South Africa-based energy company has a big new project that could provide a nice boost to earnings, but it's also created headaches.

Sasol (SSL -0.73%) has been hurt by cost overruns and other problems at its massive Lake Charles, Louisiana chemical project, resulting in a management shakeup last year. But when it resumes operations, the project may be part of an improving story for the company.

It's time for a look into the project's problems -- and whether it's a safe time for investors to buy.

What the company is building

Sasol has been building large chemicals facilities since the company launched operations in 1950, and has grown to include mining, oil, and gas operations in 32 countries.

The company saw a major opportunity to utilize cheap U.S. natural gas, and in 2014 decided to proceed with building the Lake Charles Chemical Project, known as LCCP. The project includes a 1.5 million ton per year ethane cracker and six downstream chemical units next to Sasol's existing chemical operations in the state.

Sasol said in an investor fact sheet that it continues to be viewed as an attractive investment for the company despite its challenges, because of plans to turn the existing Lake Charles site into a multi-asset operation that will allow fixed and infrastructure costs to be spread over multiple product lines. It is also expected to provide opportunities for investment in additional downstream chemical facilities in the future. 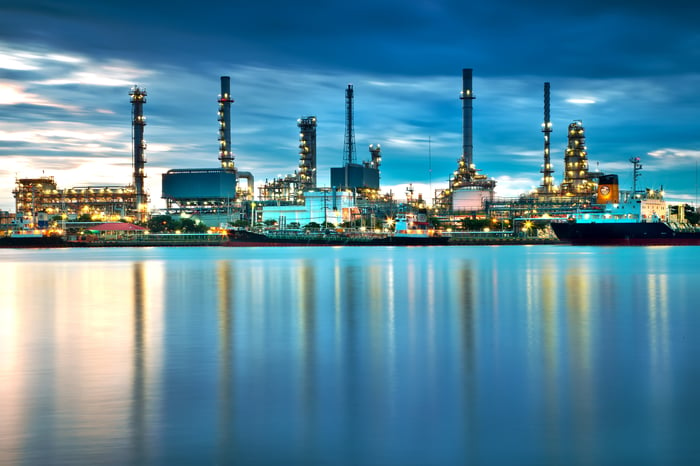 LCCP was projected to cost $8.9 billion at the time of Sasol's final investment decision, but the most recent estimates had costs swelling to between $12.6 billion and $12.9 billion.

The project has faced some challenges beyond its control -- damage from Hurricane Harvey in 2017 and a fire in recent weeks for instance -- on top of others, such as defective parts.  But the company took responsibility for LCCP's biggest problem last year when it said an internal review concluded its own control over financial reporting was "ineffective."

In its full-year results presented in October, Sasol disclosed "a material weakness with respect to the capital cost estimation process implemented in connection with the LCCP, which resulted from the aggregation of a series of individual control and project-related control environment deficiencies, the remediation of which had not been fully implemented and validated as of year-end."

"The softer chemical price outlook, combined with the increased capital cost on the LCCP, has placed additional pressure on our financial position," CEO Fleetwood Grobler said on the year-end earnings conference call.

Grobler took over as CEO in October, as former co-chief executives Stephen Cornell and Bongani Nqwababa left the company because of the problems at Lake Charles.

Sasol has historically paid a nice dividend, most recently at more than 5%, but decided to skip its most recent distribution based on LCCP's problems. The company said it may also forgo the 2020 interim dividend based on the health of balance sheet credit metrics.

Sasol is an experienced builder that has struggled with a huge project. The scale of the project will increase the company's volume of product offerings, and may pay off for investors once it is successfully operating. But while the success of the company's LCCP investment is important, it is only a small piece of the overall picture for Sasol. The company's share price has dropped 50% over the past ten years as it was hit hard by low gas prices as and also experienced periods of diminished chemical margins and lower-than expected production from certain assets.  However, with a diverse portfolio of more than $33 billion in chemical, oil and gas, mining, and other assets, the problems at LCCP are not a make-or-break factor for Sasol and should not be the sole factor influencing a would-be investor.

For the past two fiscal years Sasol has missed estimates on earnings per share but surprised analysts with higher-than-expected revenue, so it is worth watching to see if this trend continues. But the company's management upheaval and dividend suspension are not far enough in the rearview mirror for investors to buy at this time. The company has not provided a Lake Charles cost estimate update or revised timeline in months, so investors would also be wise to keep an eye out for that information before making a decision.