Please ensure Javascript is enabled for purposes of website accessibility
Log In Help Join The Motley Fool
Free Article Join Over 1 Million Premium Members And Get More In-Depth Stock Guidance and Research
By Anders Bylund - Jan 24, 2020 at 9:21AM

TI's top-line sales are still under pressure, but the underlying order flows have started to normalize.

Semiconductor giant Texas Instruments (TXN -1.57%) reported results on Tuesday night. The report, which covered the fourth quarter and full fiscal year of 2019, delivered sales and earnings slightly above analyst expectations. Management also took this opportunity to sketch out some early signs it's seeing of an upcoming market recovery.

TI's guidance for this quarter called for earnings near $1 per share on revenues in the neighborhood of $3.2 billion. On the other hand, those guidance targets were far below the Street's consensus projections at the time. Let's call this a mixed report.

There's a rebound in the cards

The revenue drops aren't dramatically different, and the second-quarter report's "broad-based weakness" triggered a lighter top-line decline than this quarter's "signs of stabilizing." Then again, the headline numbers never tell the whole story. Templeton didn't read "stabilization" in the revenue-collection tea leaves but in a less photogenic metric. 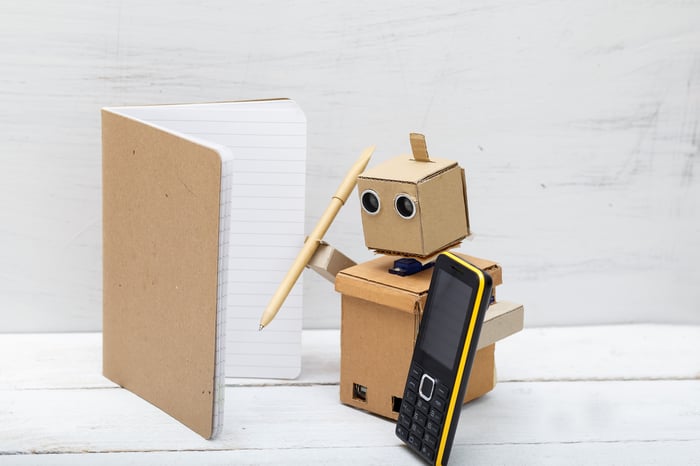 May I take your orders?

We're talking about incoming orders. The vast majority of TI's business takes place under chip-supply contracts of various types and lengths. The company takes in a new order, clears some space in its internal or external manufacturing processes to handle the new orders, then ships the chip against a revenue-collecting invoice when the manufacturing process has run its course. There's a lag time within that order-to-revenue pipeline, usually about a few months.

That's why order flows typically show signs of whatever trend break is coming up next a quarter or two before the same effects start making a difference to the revenue tallies.

That was indeed the story this time, too.

"The stabilization is reflected in the order patterns, the demands that we see through consignment, and actually the results themselves," said the head of investor relations, Dave Pahl, in TI's fourth-quarter earnings call. "So we went from the third quarter, where those markets were declining high single digits, 8%, 9%, some of them at 10%, so all those markets were declining at 3%, 4%. So those numbers suggest that there is a bottoming process."

Meet the new normal, same as the old normal

Pahl suggested that many of TI's larger customers had built up excess component inventories in 2017 and 2018, slowing down their new orders as those stockpiles were depleted in 2019. The China-U.S. trade war arguably slowed down the entire process, stretching the inventory overload a couple of quarters beyond a typical stockpile correction.

"This suggests that demand this year will be more a function of our customers' end demand and therefore the macroeconomy, which may continue to be uncertain," Pahl said.

So TI has shifted away from artificial market pressure and into a healthier shipping pattern, but it won't be all red wine and roses until the international trade wars and other macroeconomic quirks have ended. It's an improvement but hardly a hockey-stick growth trigger for TI's incoming order and revenue flows.

Is TI a buy today, based on these results?

Texas Instruments' stock barely moved on this report, but share prices have now climbed 41% higher from a 52-week perspective. The stock is trading at a somewhat frothy 26 times trailing earnings, suggesting that bullish investors already priced a gradual recovery into TI's market value.

So I wouldn't exactly bet the farm on TI shares at this point, even though the company just told us that the semiconductor market as a whole is starting to look normal again. Just stick that knowledge in your back pocket as a point of reference when you're looking at other chipmaking giants reporting their results during this earnings season.