Please ensure Javascript is enabled for purposes of website accessibility
Log In Help Join The Motley Fool
Free Article Join Over 1 Million Premium Members And Get More In-Depth Stock Guidance and Research
By Royston Yang - Jan 25, 2020 at 11:16AM

With three acquisitions over the last four years, investors want to see whether the power-sports company's strategy is paying off.

Polaris (PII 1.76%) is a leading manufacturer of vehicles such as motorcycles, off-road vehicles (ORV), all-terrain vehicles (ATV), and snowmobiles. The company owns popular brands such as Ranger, RZR, Indian and Slingshot motorbikes, and Timbersled snow vehicles.

Polaris faced significant challenges in 2016 when it was hit by a series of vehicle recalls that dented the powersports vehicle maker's reputation for reliability. In addition, the company was forced to delay its model year 2017 ORV shipments due to a weak powersports market. A weak end to the 2016 snow season further compounded problems at the company as its snowmobile division was also hit.

CEO Scott Wine then embarked on a series of acquisitions to boost Polaris' revenue base and product portfolio. The aim was to grow the company through strategic acquisitions, but investors know that acquisitions may not always work out well. Let's have a look at Polaris' track record since it conducted those acquisitions. 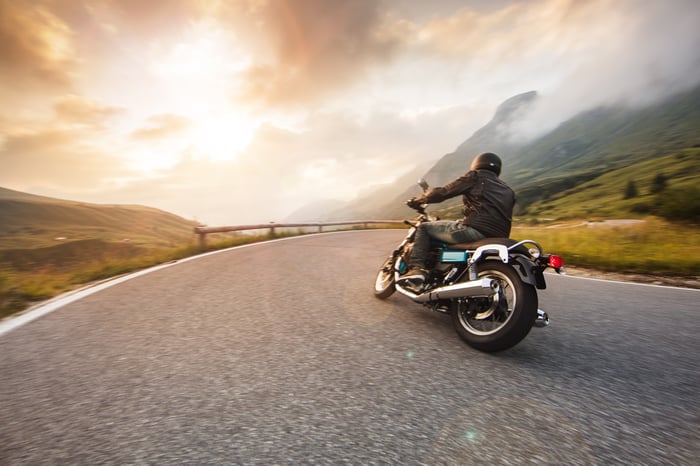 In March 2016, Polaris acquired Taylor-Dunn Manufacturing Company. It was a leading provider of industrial vehicles serving a broad range of commercial, manufacturing, warehousing, and ground-support customers. In the same year, on Oct. 11, the company acquired Transamerican Auto Parts (TAP) for $668.3 million. This allowed Polaris to access the lucrative $10 billion jeep and four-wheel-drive truck aftermarket parts and accessories space. TAP back then had 84 brick-and-mortar retail centers as well as a significant e-commerce business.

Fast forward to July 2, 2018, when Polaris announced the acquisition of Boat Holdings for $806.7 million. The business sold pontoons and deck boats, and Polaris felt there were cross-selling opportunities that it could leverage. The acquisition was paid for by tapping on a credit facility as well as proceeds from the issuance of 4.23% senior notes due July 3, 2028.

With multiple acquisitions, the key questions on investors' minds would be: Can the company integrate these purchases well? Will the new acquisitions contribute materially to both the top and bottom lines? 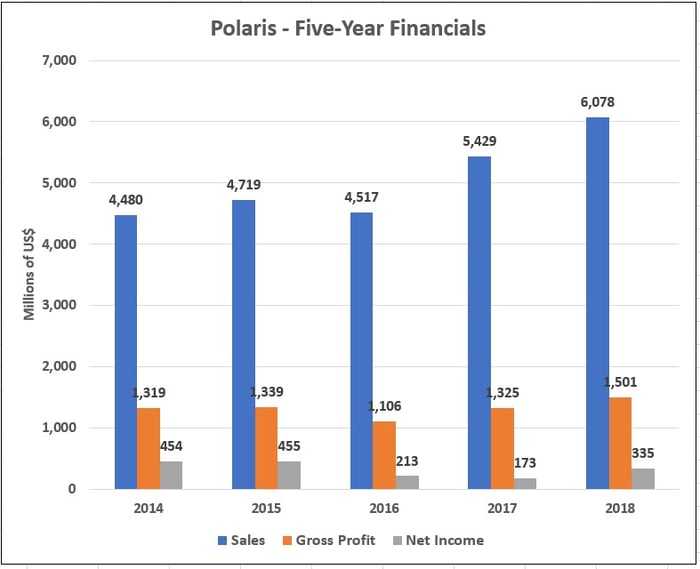 In the graph above, it's clear that revenue has increased significantly from FY 2016 onwards, as a result of the effects of the acquisitions. Gross profit has increased in line with revenue, with margins hovering around 24.5% from 2016 to 2018. Though net income for 2017 looks to have dipped, there were a host of one-off adjustments hitting the financials that year, such as wind-down costs relating to Victory Motorcycle ($52.4 million) and a non-cash writedown of deferred tax assets ($55.8 million). Adjusting for these one-off expenses, core net profit actually grew by 46% year over year for 2017.

2018 saw a $13 million gain on the sale of Brammo Inc.'s shares. When adjusted, the increase in net income was smaller at 3.5% year over year, but note that Boat Holdings was only acquired in mid-2018, so the contribution would have been for just half a year.

Looking to Polaris' most recent third quarter 2019 earnings, revenue continues to grow -- up 13.4% year over year for the first nine months of 2019, but net income took a tumble to $225 million, down 7.7% year over year, on higher selling and marketing expenses and significantly higher interest expense (on borrowings).

The acquisitions have certainly resulted in accelerated growth in Polaris' top-line, as revenue surged from $4.5 billion to $6.1 billion, a nearly 35% increase in just two years. Net profit did rise along with revenue but was impacted by many one-off incidents including product recalls. Overall, though, we can conclude that the acquisitions did help to boost Polaris' net income by opening up the company to a greater range of revenue streams.

The latest Q3 2019 results should sound a note of caution, though. Revenue may have continued its ascent, but net income is slowly being impacted by significantly higher finance costs. Total debt declined from $1.1 billion at end-2016 to $894.6 million at end-2017 but has since surged significantly to $1.77 billion due to the purchase of Boat Holdings. If this debt load is not reduced over time, the higher finance costs could continue eroding profitability for Polaris.

The good news is that acquisitions seem to be an effective method for Polaris to boost its revenue, as such purchases are seen as complementary to the company's core business in vehicles and motorsports. These opportunistic acquisitions have the ability to post sustained growth for the company, but investors need to watch out for Polaris' growing debt load as it may represent a red flag for the business.