Comcast's Universal Studios is bringing Super Nintendo World to to a few of its theme parks, and it could be just the ticket to winning the game against Disney.

Comcast's (CMCSA 0.44%) theme parks division needs some help with its attractions pipeline, so it's only fitting that it calls on the most famous plumber of all. Nintendo's (NTDOY 0.05%) Super Mario will play a starring role when Super Nintendo World makes its debut at Universal Studios Japan later this year, followed by openings at its California and Florida parks within the next three years.

We've known about Super Nintendo World since late 2016, but as we close in on the rollout of the first theme-park expansion in Osaka, we see Comcast willing to offer up a few more details. Speaking at its fourth-quarter earnings call on Thursday morning, Comcast announced that the new land will open at Universal Studios Japan just ahead of the 2020 Summer Olympic Games in Tokyo. Given the tourism spike the Olympics will bring, it's a pretty big deal to have the new Nintendo-licensed attractions up and running. Comcast also confirmed during the call that Florida's version of Super Nintendo World will take place at Epic Universe, the new theme park that it will open just outside its existing Universal Orlando resort in 2023. 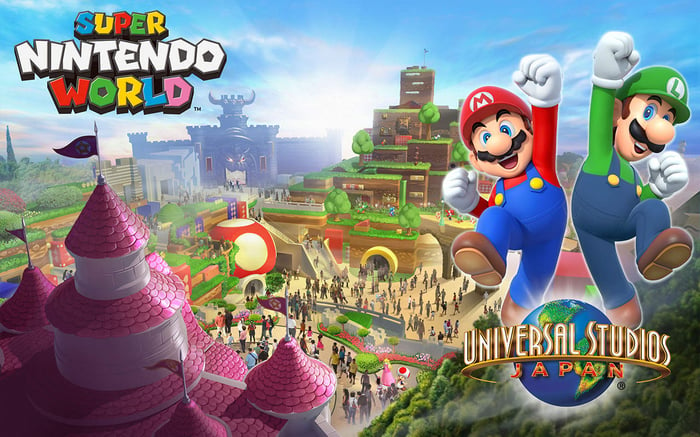 Sorry, Mickey -- your princess is in another castle

Operating a theme park can be an arms race, especially when the world's biggest operator is a local rival. Disney (DIS -4.01%) and Comcast have theme parks in California, Florida, and Japan, and the competition is fierce in Florida, where the two competitors are a 15-minute drive apart. They have only about an hour of road time between them in California and a couple of hours in Japan between Osaka and and the Disney-licensed resort. In short, when one of them raises the bar, the other has to follow.

Comcast is hoping it can duplicate its success from when it opened its first Wizarding World of Harry Potter land nearly a decade ago. The addition of the Potter-themed attractions has driven as much as 2 million more guests a year at some of its parks, and its research shows that Nintendo can be another big driver of attendance.

Disney and Comcast are blue chip stocks that dominate the theme park landscape, accounting for 15 of the 16 most visited theme parks worldwide. Comcast can use the boost that a successful launch of Super Nintendo World can bring, especially since it's come up short in some of its more recent additions. All but one of the last couple of attractions that it has introduced in Florida have opened to mixed if not negative reviews. The one success has been a Potter-themed family coaster, but the ride's uptime continues to be unreliable more than seven months after its grand opening.

Comcast might have some hits between now and when Super Nintendo World opens at Universal Studios Hollywood in California and Epic Universe in Florida, but even if the batting slump continues, it should easily be able to hit it out of the park with Nintendo at its side. Disney seemed to be phoning it in until turnstile clicks started to surge for its biggest competitor following the 2010 opening of Wizarding World of Harry Potter. Now we're seeing Comcast try to react to the new additions going into Disney World and Disneyland.

Consumers win, as long as they can stomach the higher ticket prices. Local tourism industries also come out ahead with the surge in public interest. With Comcast hitting all-time highs last week and Disney doing the same late last year, it's fair to say investors have also been rewarded. Competition is a good thing as long as rivals can keep tapping the "Continue" option to stay in the game.