Please ensure Javascript is enabled for purposes of website accessibility
Log In Help Join The Motley Fool
Free Article Join Over 1 Million Premium Members And Get More In-Depth Stock Guidance and Research
By Billy Duberstein - Jan 26, 2020 at 8:15AM

And how to use their example to find the next big thing.

Some people may be marveling at how cloud software stocks can garner such high valuations today. These companies display very strong revenue growth but currently make little to no profit and are often valued at 15-20 times sales or even greater.

The answer may lie in the fact that these companies have early product leadership in an industry with extremely favorable long-term prospects. That combination has the potential to compound investment dollars at staggering rates for many years. In fact, if you look at the following examples of early leaders from the personal computing age in the 1970s and 1980s, you'll find two stocks that have turned just a $500 investment into $1 million today. Here's how they did it, and the lessons they provide for picking the next generation of world-beating tech stocks. 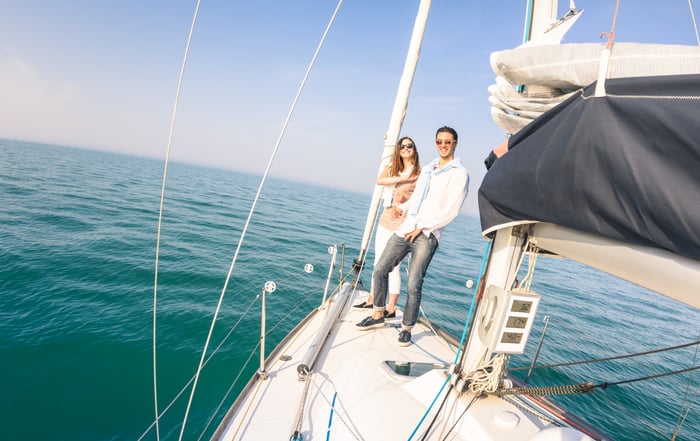 These stocks have made 2,000 times their initial investment. Image source: Getty Images.

Founded in 1982 by former Xerox (XRX) employees John Warnock and Charles Geschke, Adobe (ADBE 1.69%) began its incredible run in computer graphics with a revolutionary programming language called PostScript. It was an important invention in that it could describe letters and shapes in mathematical terms across any type of computer. In fact, the technology was so advanced that Apple (AAPL 2.54%) purchased an early 15% stake in 1983 and licensed PostScript for Apple products.

Adobe capitalized on its highly profitable PostScript licensing fees by developing more products that would go on to lead the market in computer-generated text, graphics, and video. These include Illustrator in 1989, one of the first computer drawing software applications, and the company's flagship Adobe Photoshop software for graphics editing in 1989, followed by Adobe Premiere, the company's video editing software, in 1991. And in 1993, the company introduced the portable document format (PDF), which became the standard format for digital document sharing.

Adobe went on to make a consequential acquisition in 2005, the $3.4 all-stock acquisition of its main rival, Macromedia, which brought in  Shockwave and Flash, two important video player technologies that would power a lot of mobile and online video for the next decade, as well as Web authoring software in DreamWeaver. And in recent years, Adobe has expanded into marketing technology and analytics, especially with the 2018 acquisition of B2B marketing tech company Marketo. By expanding to marketing tech, Adobe grouped its digital graphics expertise with analytics to serve the digital marketing industry with a comprehensive solution.

In the 2013-2014 time frame, Adobe transitioned its business model from selling bulk software licenses to a recurring subscription model delivered through the internet. This move had the near-term effect of depressing revenue and also earnings, but this new software-as-a-service model eventually resulted in a more efficient business and high customer satisfaction. Over the next five years between 2014 and 2018, Adobe's GAAP net income skyrocketed 10-fold from just $268 million to $2.59 billion, with Adobe's stock rocketing 430% in that time. Since 2018, the stock has gone up another 75%.

But the long-term returns for Adobe are even more staggering. The company went public on August 22, 1986 at a price of $11, but the company has split its stock so many times that its split-adjusted IPO price is just $0.17. That means just a $500 investment in Adobe at its IPO would have gotten you 45 shares, which today would have become 2,912 shares worth a little over $1 million.

As Adobe ran with the early lead in computer graphics, Intel (INTC 3.06%) invented perhaps an even more consequential computing element: the microprocessor. Intel was founded in 1968 by founders Robert Noyce and Gordon Moore, who added Hungarian-born engineer Andy Grove to the roster shortly thereafter. These three would become Intel's first chairmen and CEOs for the first era of its history, supervising some of the most groundbreaking innovations in computer hardware and manufacturing.

One of Intel's first products was a project requested by the Japanese calculator manufacturer Busicom, which asked for 12 new chips for its upcoming calculator. Intel's top engineers came up with a more novel solution, making one chip that did the work of 12. And with that, Intel was off to the races. Founder Gordon Moore also coined "Moore's Law," the theory that the number of transistors able to be fit on a silicon chip doubles every year – though in 1975, Moore revised that to every two years. Intel was able to better that threshold, doubling processor capacity every 18 months on average for the next few decades.

Believe it or not, despite basically inventing the microprocessor, a large part of Intel's business was initially in DRAM memory, which it had also invented in the early 1970s. However, in the 1980s, competition from Japan caused this market to become less profitable, and Intel pivoted to really focus on its microprocessor lead, becoming the sole supplier to IBM (IBM 2.47%) personal computers, which, believe it or not, was the dominant personal computer brand at the time. Intel thus became a standard for PC processors much in the same way that Microsoft (MSFT 2.03%) Windows did in operating systems, so much so that the combination of Intel processors and Windows became known as the "Wintel" platform.

However, the past few years have seen Intel's dominance of processors come into question. In 2018, main competitor Advanced Micro Devices (AMD 8.73%) surpassed Intel in the race to produce a 7nm CPU -- a rare instance where Intel's in-house manufacturing has fallen behind AMD's outsourced semiconductor fab Taiwan Semiconductor Manufacturing (TSM 3.22%).

Intel has also begun venturing out of its main processor business in recent years, with a series of large acquisitions to launch itself into programmable chips (Altera), self-driving car software (Mobileye), and security software (McAfee), among others.

Despite these recent headwinds and ventures into adjacent businesses, Intel still has a large market share in processors for both PCs and data centers, which makes it hugely profitable and a steady dividend payer.

What Intel and Adobe did right

How were Intel and Adobe so successful for their shareholders? Both companies were very early innovators at the dawn of the computing age -- Intel with microprocessors, and Adobe with computer graphics. Both companies were also led by incredible management teams that constantly cemented that leading position and innovated new products within their respective niches of expertise.

This may be the reason cloud software stocks trade so highly today. While not all of them will probably make it to the status of an Intel or Adobe, should any break through, the potential for absolutely massive long-term gains in these growth stocks is certainly there. Here at the Fool, we regularly investigate stocks with Intel or Adobe-like potential in our main Stock Advisor and other specialized stock-picking newsletters.