Please ensure Javascript is enabled for purposes of website accessibility
Log In Help Join The Motley Fool
Free Article Join Over 1 Million Premium Members And Get More In-Depth Stock Guidance and Research
By Brian Stoffel - Jan 26, 2020 at 10:40AM

This company sold nothing three years ago. Today, it's a force in the world of coffee.

I won't bury the lede: In my ten-plus years at The Motley Fool, I've never seen a company grow faster than Luckin Coffee (LKNC.Y -0.73%). Three years ago, it didn't even exist. Today, it has over 4,500 locations in China -- enough to beat out Starbucks (SBUX -0.05%) as the biggest coffee chain in the country.

I'll cover the growth below, with five charts to put everything in perspective. More importantly, I'll discuss whether this means the stock is a buy for growth investors. 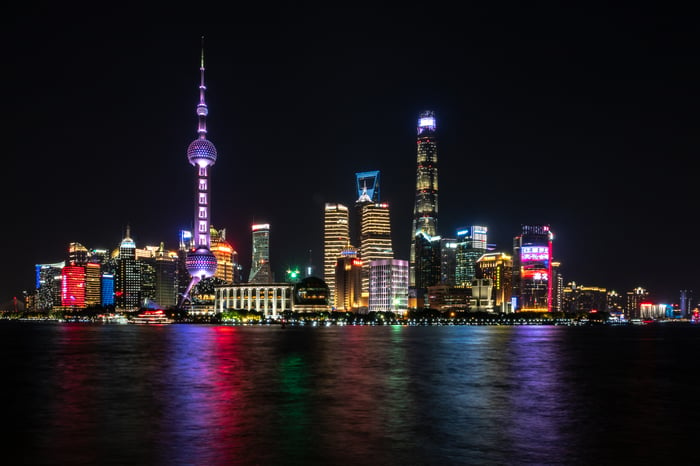 For a long time, when it came to "China" and "coffee," investors made a pretty well-reasoned assumption: Starbucks would come to dominate the scene.

As recently as the end of 2017, this seemed like a foregone conclusion. Here's what the location count looked like for Starbucks and Luckin over the time frame since: 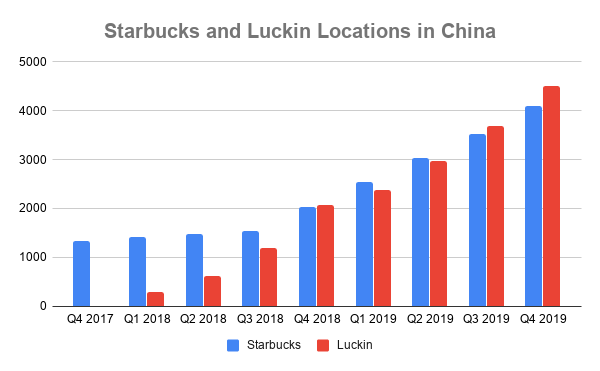 Chart by author. Data source: Company investor relations and filings with the Securities and Exchange Commission (SEC).
Note: Starbucks only releases China location count during the third calendar quarter; linear progression between these times was applied to show approximate count.

Starbucks has long focused on creating a "third place" for people -- with home and work being the first two. It aims to be a space for a community to gather.

Luckin has no interest following that path. The company's orders are only taken via its app, and most locations have minimal seating so customers can get their coffee and get on with their day. 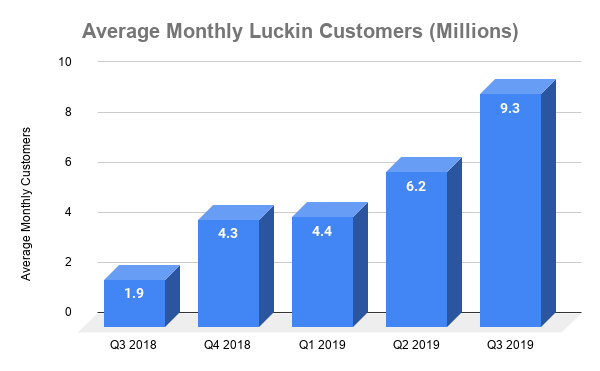 If each of those bars represented a year's growth, it would be impressive. The fact that each one represents growth every three months is unprecedented.

Here's the important part: Any company can increase customers by opening up new stores, but that doesn't mean it's providing something that customers want. Average monthly customers (up 389%) growing faster than store count (up 210%) over the same period means each existing location is drawing in more customers. People like what the company is selling.

Coffee (and other items) flying off the shelves: 467%

Luckin doesn't just sell coffee -- it also has juices and tea available. But while having more stores and more customers is nice, does that actually mean people are buying more? 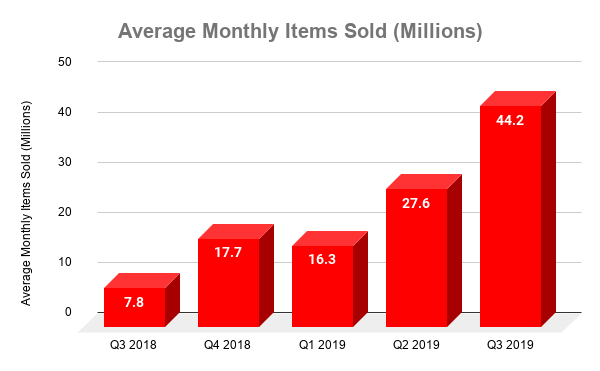 Let those numbers sink in for a second. Between last summer and last fall -- in a matter of three months -- the amount of product Luckin sold jumped 60%.

Here's the more important part: Because the growth of items sold (467%) outpaces the growth in customers (389%), it's safe to assume that existing customers are buying more every month. That's another sign that people like Luckin.

Perhaps you've picked up on the trend by now. We know that Luckin has grown its store base, its customer count is growing faster than the store base, and items are flying off the shelves faster than customer numbers are growing.

But what if each item is priced lower, and that's how Luckin is drawing them in? Not to worry: 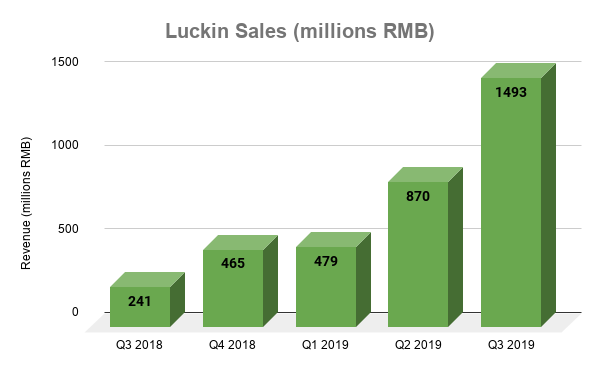 So let's put this together: Not only are people buying more stuff (467% growth), they are paying more per item for that stuff, leading to faster (520%) revenue growth. Apparently, people not only like Luckin -- they're willing to pay a little more over time for their coffee.

"Fine," you might say, "but does the company make any money?"

That's a fair question. And right now, the answer is no. Over the past twelve months, Luckin has lost roughly $340 million. The build-out isn't cheap, and neither are the advertising and hiring sprees necessary to support the company's expansion.

At the same time, however, the company is becoming vastly more efficient. In the third quarter of 2018, Luckin had to pay roughly $2.37 for every cup of coffee it sold. One year later, that figure is down to $1.40. Spread out over 44 million items, that's a huge difference. 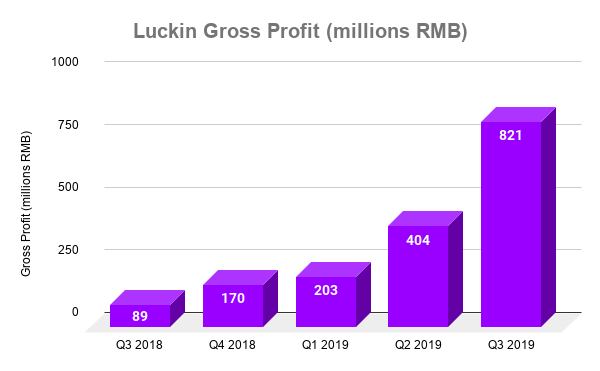 To put this in perspective, the company's gross margin expanded roughly 16 percentage points over the past year -- from 37% to 53%. And opening up unstaffed coffee machines throughout the country, as the company recently announced, will likely only add to the widening margins.

The fact that gross profit (822% growth) is growing faster than sales (520% growth) means that -- critically -- Luckin has financial leverage.

Again, these are numbers I've never seen before -- let alone from a coffee company. Luckin's execution is mind-boggling. At the same time, however, I have a tough time convincing myself to buy shares, because they don't fit in with my investing framework, which emphasizes sustainable competitive advantages.

I'm also somewhat bewildered by these figures: Since I've never encountered them before, I'm not sure what to make of them. For the time being, I'm comfortable giving the company an outperform rating in my All-Star CAPS profile. Over time, as I watch Luckin's progress, it could easily enter my real-life portfolio as well. Either way, it will be highly educational.