Please ensure Javascript is enabled for purposes of website accessibility
Log In Help Join The Motley Fool
Free Article Join Over 1 Million Premium Members And Get More In-Depth Stock Guidance and Research
By Rhian Hunt - Jan 27, 2020 at 6:49AM

Do Alamo’s stock value gains reflect the risks versus rewards of its acquisition strategy?

Plunging boldly into the world of sawdust and timber, Alamo Group (ALG -0.61%) spent a solid chunk of cash in 2019 acquiring Morbark Holdings Group, LLC, a forestry equipment manufacturer. The biggest of Alamo Group's three 2019 acquisitions, Morbark added a whole new sector to its existing line of municipal cleanup vehicles. A few days ago, Alamo Group publicly released its Form 8-K/A filing with the SEC, revealing several important details about Morbark. The document features some data helping to show stock investors whether the acquisition of the forestry vehicle company will let Alamo take root in the fertile soil of profitable new business opportunities.

Alamo spent $325 million sealing the deal with Morbark, diversifying its product lines into a fresh field of industrial manufacturing. Morbark fabricates a variety of forestry-related equipment, including everything from chippers and flails to help manage biomass and forest health, to highly maneuverable wheel loaders useful for logging in rugged terrain.

According to the Food and Agriculture Organization, harvesting and sale of wood products has reached its highest level since monitoring began in 1947. Wood product trade jumped 11% between 2017 and 2019 alone, driving demand for machinery to extract timber for industrial use. Wood pellet production grew by a similar amount in just one year to meet mounting bioenergy quotas. Pellet demand fits neatly with Morbark's drum chippers and similar equipment, which turn branches and other wood smaller than sawtimber into salable chips or sawdust. 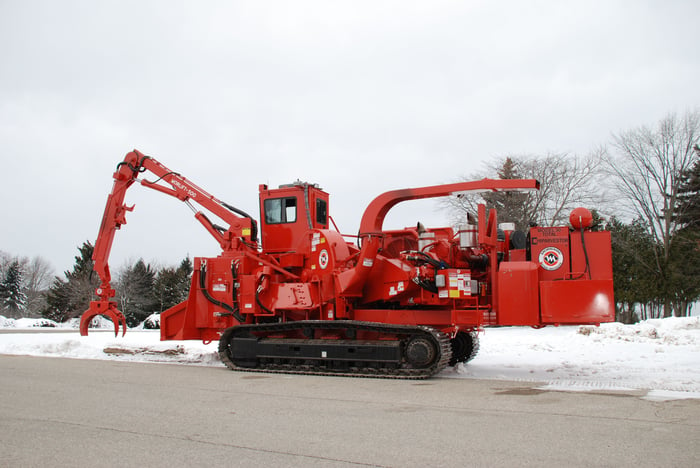 While Alamo's purchase of Morbark positioned it to profit from several rapidly growing markets, the acquisition had a short-term downside. Alamo's third-quarter 2019 results reported a 6.3% year-over-year drop in net income, despite an 8.8% jump in net sales. The Q3 report ascribes this decline directly to the acquisition of Morbark, along with two smaller companies, Dixie Chopper and Dutch Power.

This net income drop resulted from timing, with Alamo absorbing the high financing expenses to secure funds ahead of the actual acquisitions. Since the deal didn't close until October 2019, technically in the fourth quarter, investors will get a clearer picture of its financial impact when Alamo releases its Q4 2019 results in the near future.

In order to help assess whether the hit to Alamo's net income in 2019 was worth it in terms of potential gains to future growth and share value, a closer look at the company's SEC filings and other data reveals several important facts.

Morbark's balance sheet shows that, in the first nine months of 2019, it converted sales into profits with nearly twice the efficiency of Alamo. Morbark's net sales of $189.6 million and net income of $22.7 million during the period gave it an approximate 11.98% net margin, compared to Alamo's 6.51% net margin ($818.9 million net sales, $53.3 million net income).

While the comparison is inexact because Alamo Group is a publicly traded stock and Morbark is not, measuring liabilities and equity between the two shows very close equivalence. Morbark's current 36.2% debt-to-equity, or D/E, ratio on approximately $33.78 million in liabilities and $93.25 million in members' equity is higher than Alamo's current 27.1% D/E ratio, but Alamo's debt-to-equity ran as high as 34.5% in March 2019 and peaked at 63.3% historically. Both are within or nearly within the 30% D/E ratio that generally indicates good solvency and stability, so Morbark will not significantly alter Alamo's liability situation.

While it's just one measure among many, Morbark's reported inventory changes shows that companies are purchasing and using its logging and silviculture equipment as fast as it can be made. From Dec. 31, 2018 to Sept. 30, 2019, Morbark's inventories dropped by $4.1 million. Ending inventories stood at $66.1 million. These figures suggest that demand for Morbark's logging gear is outpacing its current production. Now backed by Alamo, Morbark could potentially expand its manufacturing to harvest additional profits from this booming market.

Alamo's forestry equipment acquisition may be solid as an oak

Overall, then, multiple factors point toward Alamo's Morbark acquisition as a solid move. To recap, Morbark is positioned in the rapidly expanding forestry equipment industry, sustained by fast-growing demand for both timber and wood pellets for bioenergy. Its fundamentals equal or better Alamo's own in several key areas, including a much better net margin, comparable debt-to-equity that won't negatively affect Alamo's liabilities, and inventory data suggesting fast-growing demand.

Alamo Group appears to have added a strong, efficient company to its lineup of brands with its Morbark purchase, one that helps it expand into a promising sector of industrial vehicles and equipment. Analysts expect the worldwide market for logging and forestry equipment to show an approximate 4% compound annual growth rate, or CAGR, through 2026. Alamo's acquisition, in my opinion, has the potential to buttress its profitability and cause increases in its share value throughout much of the 2020s, assuming continued good management of Morbark.