Please ensure Javascript is enabled for purposes of website accessibility
Log In Help Join The Motley Fool
Free Article Join Over 1 Million Premium Members And Get More In-Depth Stock Guidance and Research
By Eric Volkman - Jan 28, 2020 at 8:00AM

A trio of well-known companies wasted no time in declaring some of the first payout hikes of 2020.

2020 is still young, but already a clutch of dividend stocks have added to their payouts, making their shareholders incrementally richer.

Some of these raisers are well known among investors, others less so. Let's take a look at three that fall more into the first category. The recent dividend raises from this trio, by the way, are yet to kick in -- so there's still time to take advantage of the enhanced distributions. 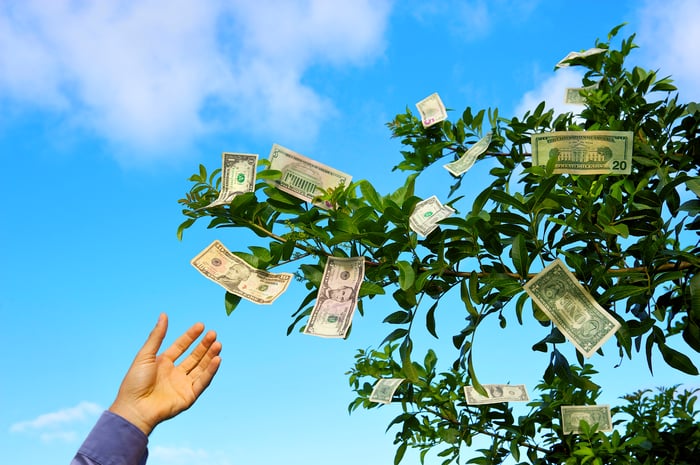 Just last week, Intel (INTC 3.21%) declared a 5% raise in its quarterly dividend to $0.33 per share. The announcement was made concurrently with the release of the company's Q4 of 2019 results.

No wonder the company is in a raising mood. With all but one of its business units notching double-digit revenue increases on a year-over-year basis and its costs in check, Intel easily topped analyst expectations on the top and bottom lines. Non-GAAP (adjusted) net income rose by a powerful 19%, with free cash flow (FCF) increasing at essentially the same rate.

Strong demand for the processors Intel has specialized in for years, plus a relatively new revenue stream in the consistently hot cloud segment, have juiced overall sales -- Q4's more-than-$20 billion was a record for the company for that particular quarter.

Times are good for Intel just now, and it's headed into a future that will require ever-greater processing power and cloud computing services. And its new dividend looks sustainable, at the very least.

Intel's upcoming payout will be dispensed on March 1 to stockholders of record as of Feb. 7. At the most recent closing stock price, it would yield 1.9%.

Like Intel, Kimberly-Clark (KMB 1.80%) also handed down its Q4 2019 results and declared a fresh dividend last week. A Dividend Aristocrat, the company made its 48th annual hike, upping its quarterly payout by almost 4% to $1.07 per share.

Kimberly-Clark is a Dividend Aristocrat for a reason. The company, the owner of a big set of familiar CG brands like Kleenex tissues and Scott paper towers, is a reliable profit maker and cash generator. As a mature company, its revenue growth is fairly tame (net sales were flat year-over-year in Q4), although cost-cutting helped adjusted net profit rise a respectable 6%. FCF fell, but the company still has the means to pay the enhanced dividend.

Kimberly-Clark isn't Intel; it doesn't operate in a dynamic environment poised for sustained high growth. Instead, it's an unspectacular performer that has managed to hold onto its niche for many years while growing its dividend. I wouldn't worry about the immediate future of this payout.

At its current stock price, Kimberly-Clark's new dividend would yield slightly under 3%. The distribution is to be paid on April 2 to investors of record as of March 6.

Saving our one high-yield dividend in this article for last, we have Dominion Energy (D 1.28%). This sprawling utility very recently bumped its quarterly by 2% to land at $0.94 per share.

For a company in the utility sector, traditionally considered a very staid corner of the economy, Dominion is doing a rather good job of lifting its revenue, while staying well in the black on the bottom line. And this despite the considerable expenses of costly build-outs like the Atlantic Coast Pipeline, a natural gas conduit in which it is the lead developer. Dominion likes its big projects -- not long ago, it announced a multi-billion dollar wind farm off the coast of Virginia, which would be the largest offshore facility of its kind in this country.

Big projects can be risky due to public resistance on environmental and other grounds -- Atlantic Coast Pipeline has been tied up in litigation that's reached the Supreme Court. So Dominion stock is more of a gamble than the usual conservative and cautious utility.

For investors with an appetite for some risk, though, Dominion will hand out its newly raised dividend on March 20 to shareholders of record as of Feb. 28. It fits nicely into the high-yield dividend category, with a theoretical yield of 4.5%.