Please ensure Javascript is enabled for purposes of website accessibility
Log In Help Join The Motley Fool
Free Article Join Over 1 Million Premium Members And Get More In-Depth Stock Guidance and Research
By Leo Sun - Jan 28, 2020 at 10:30AM

Which disk drive maker has more room to run in 2020?

Seagate Technology (STX) and Western Digital (WDC 4.42%) are the world's two largest hard drive makers. Both companies struggled with declining sales and contracting margins over the past year due to sluggish PC sales and soft demand from enterprise customers.

However, signs of a cyclical turnaround lifted shares of Seagate and WD 40% and 60%, respectively, over the past 12 months. Does either stock have more room to run in 2020? Let's dig deeper into their core businesses to decide.

The differences between Seagate and WD

Seagate and WD both sell platter-based HDDs (hard disk drives). Seagate controlled 40% of the HDD market in the third quarter of 2019, according to Coughlin Associates, while WD held a 36% share. Toshiba (TOSBF 5.28%) held the remaining 24%. 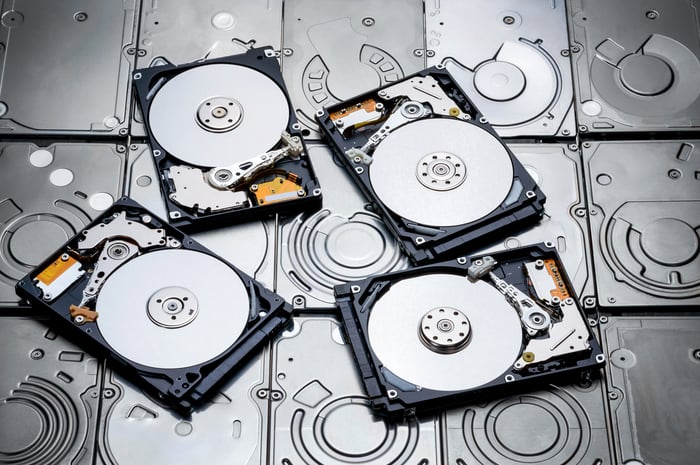 Seagate mainly sells HDDs, while WD expanded into SSDs (solid state drives) with its acquisition of SanDisk in 2016. SSDs, which store data on flash (NAND) memory chips instead of platters, are smaller, faster, more power-efficient, and less prone to damage than HDDs -- but they're significantly pricier.

Instead of worrying about SSDs, Seagate pivoted away from lower-capacity HDDs (which compete against SSDs in consumer electronics) and sold higher-capacity HDDs to cost-conscious data center customers. It also gradually expanded into the SSD market by joining Bain Capital in a joint acquisition of Toshiba's memory chip business in 2018, which allowed to it sell more enterprise and gaming SSDs.

Meanwhile, WD's ownership of SanDisk fully exposed it to the global glut in NAND chips, which crushed market prices over the past two years. That decline reduced its SSD and flash memory revenue as cheaper SSDs cannibalized its HDD business. Seagate's business model is less capital-intensive than WD's, so its free cash flow (FCF) has remained more stable over the past three years: 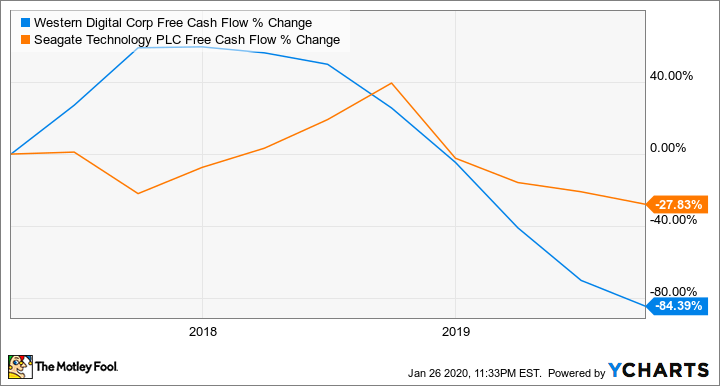 Seagate consistently repurchases its shares with its FCF, but WD hasn't bought back any shares over the past four quarters. Both companies still consistently pay dividends -- Seagate pays a forward dividend yield of 4.1%, compared to WD's yield of 2.9%.

However, Seagate only spent 66% of its FCF on its dividend over the past 12 months, while WD's dividend gobbled up 166% of its FCF. Those ratios suggest that Seagate's slow and steady approach is more sustainable than WD's aggressive assault on the SSD market.

Seagate and WD both experienced sharp revenue declines over the past year:

Yet both companies are improving on a sequential basis. Seagate's revenue grew sequentially over the past two quarters, and it expects its revenue to stay flat annually and rise nearly 6% sequentially in the second quarter as the cyclical headwinds fade.

WD expects its revenue to stay flat annually and grow 4% sequentially in the second quarter. During last quarter's conference call, CEO Steve Milligan declared that the NAND market had "passed a cyclical trough."

Both companies expect their gross margins to expand sequentially in the second quarter. Seagate attributes that recovery to stronger sales of its higher-margin 16TB HDDs, while WD cites rising NAND prices as its main tailwind.

Seagate and WD both have room to run, but Seagate's less capital-intensive model, its low exposure to volatile memory prices, its generous buybacks, and its bigger (and more sustainable) dividend all make it a better buy than WD at these prices.