Please ensure Javascript is enabled for purposes of website accessibility
Log In Help Join The Motley Fool
Free Article Join Over 1 Million Premium Members And Get More In-Depth Stock Guidance and Research
By Rhian Hunt - Jan 28, 2020 at 9:20AM

Why a protein-focused company is getting rid of a growing, profitable protein brand.

Tyson Foods (TSN 0.63%) announced early in the year that it sold off Golden Island Jerky, one of the brands it won just six years ago in a knock-down, drag-out bidding war against Pilgrim's Pride Corporation for control of Hillshire Brands. With meat snacks of all kinds thriving as a rapidly widening group of consumers decides they're a great thing to sink their teeth into, Tyson's decision to sell the brand -- possibly at a loss -- looks odd at first glance. Some analysts view the sale as a desperate effort, but some important data suggests a different reason and outcome.

Ditching jerky when it's booming

At first glance, Tyson's decision to divest itself of the Golden Island Jerky brand seems questionable. Jerky, especially nutrient-rich, healthy types like those made by Golden Island, has caught on like wildfire among multiple new demographics in the past decade. This adds to, rather than replacing, continued high demand among its original core purchasers, American working class men. Women and professionals now also favor jerky and other meat snacks as nutritious, energy-dense, highly portable foods for busy lifestyles.

Mordor Intelligence estimates worldwide meat snack sales will grow at a 9% compound annual growth rate from 2019 through 2024. Other research indicates that jerky, considered in isolation from other meat snacks, is growing 4.2% annually, a trend forecast to continue through 2022 at a minimum. 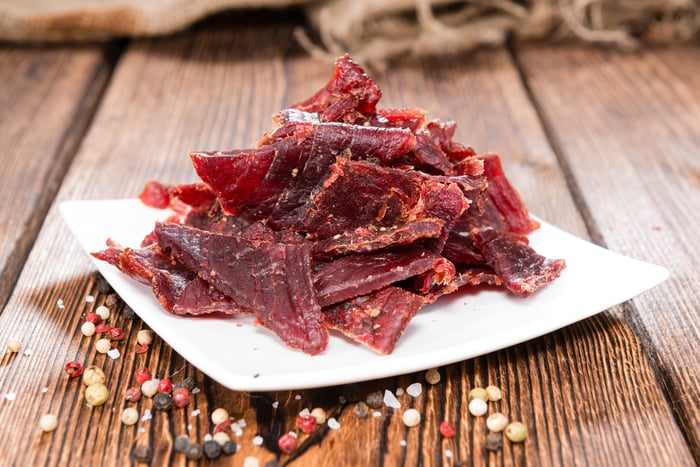 Additionally, the sale of Golden Island may be netting Tyson tens of millions less than it initially paid to acquire this segment of Hillshire. For the moment, the price Jack Link's paid for the acquisition remains undisclosed, so there is no hard data on whether Tyson made money from the sale.

However, an item in the company's fiscal year 2019 annual report might provide a clue. In the report, notes refer to inclusion of a "$41 million pre-tax impairment charge related to the planned divestiture of a business." Since Tyson's sale of Golden Island had not been publicly announced at the time of filing, this "impairment charge" may refer to a net loss of $41 million from the divestiture. Earlier, Tyson absorbed a $101 million impairment when it sold the Van's Natural Foods and Sara Lee brands in 2018. Both of those brands also came with the Hillshire purchase back in 2014.

Tyson's execs have a plan

It appears Tyson is divesting itself of brands that aren't in its areas of current strategic focus in order to fund expansion in other business sectors. Besides selling Golden Island, it also eliminated its Yappah snack crisp brand. Regarding its Golden Island sale, Worth Sparkman, a spokesman for Tyson, stated to news source Meat+Poultry that the decision was made "to generate profitable growth in the business and our need to focus on, and invest in, strategic growth priorities where we are completely advantaged."

As for where Tyson intends to put the money, the answers seem fairly obvious. Tyson is making a big push into plant-based and cell-based meat alternatives, including both joint ventures and its own Raised & Rooted brand. Given that the jerky market is expected to reach $1 billion soon, while some analysts predict a $2.5 billion market for plant-based protein by 2023, Tyson is probably just "following the money" to the market with the bigger potential.

Alternatively, Tyson could redirect funds to its chicken and beef segments. Huge Chinese demand for meat products, caused by devastation of China's porcine resources by the so-called "Pig Ebola" virus is an opportunity Tyson is well-positioned to seize.

Regardless of short-term impairment charges or other splashy apparent negatives, Tyson has delivered steady net margin growth for at least a decade. Tyson's net profit margin went from being negative in 2009 -- and averaging 1% to 2% before that -- to approximately 5% in 2019. That level of growth is a testament to a competent strategy, executed successfully over a considerable span of time. Annual dividend payouts similarly increased from $0.16 per share in 2012 to $1.55 per share in 2019.

Despite the apparent downsides of the Golden Island sale, the company's executives appear to know what they're doing. The company has delivered notable growth and returns over time. This latest move, to develop the plant-based meat sector and possibly increase pork and beef production with the money obtained by the divestiture, underlines its flexibility and alertness to market trends. In my opinion, Tyson will continue to provide good value for those investing in food stocks now and over the next several years.