Schwab is in a strong position in a consolidating asset management industry.

Changes in the asset management business are expected to lead to more industry consolidation. Firms have been riding a long bull market, but that ride is expected to get bumpier with increased market turbulence. There are other trends afoot as well, such as a shift from active to passive investing, necessary investments in technology, and pressures toward lower fees.

These are among the trends that will force companies to explore mergers and acquisitions to gain the scale they need to compete in a more difficult environment. One of the biggest deals is Charles Schwab's (SCHW 1.17%) acquisition of rival brokerage TD Ameritrade for $26 billion. The deal won't close until later this year, but if and when it's done, it will, in effect, take out a main competitor and solidify Schwab as a top-three asset manager in assets under management (AUM). As of Dec. 31, Schwab has $4 trillion in AUM. When you add TD Ameritrade's $1.3 trillion, Schwab would have $5.3 trillion, which would make it the third largest, behind BlackRock and Vanguard.

It was one of the "bold" moves the company has made to improve client and shareholder value, Schwab CEO Walt Bettinger said in the fourth-quarter earnings release. Will it pay off for investors? 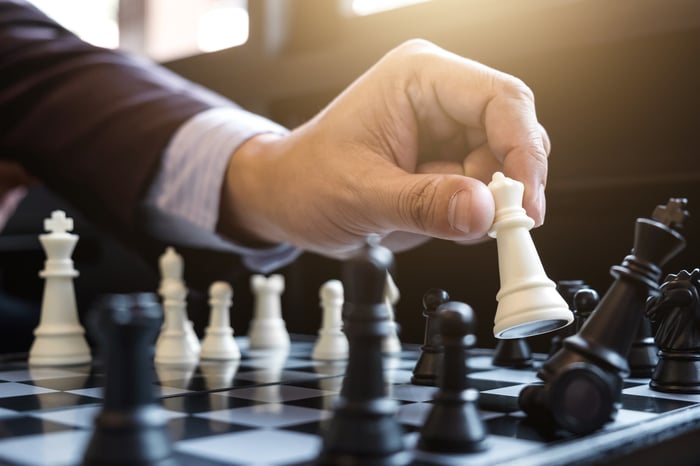 Charles Schwab has made some bold moves to gain an edge in the asset management industry. Image source: Getty Images.

One bold move deserves another

TD Ameritrade would bring to Schwab its 12 million client accounts, $1.3 trillion in assets, and $5 billion in annual revenue. It would allow Schwab to offer a wider array of products and services to this larger client base. Further, the new combined entity is expected to generate lower operating expenses as a percentage of client assets, as company officials expect to reduce costs by up to $2 billion by eliminating duplicative roles and services, as well as through downsizing real estate and administrative functions. The lower expenses will be used to invest in new products to enhance the customer experience and diversify revenue streams.

The other bold move the firm made last year was going to zero fees for commissions on trades. The move was made, among other reasons, as a result of pressure from online brokers, like Robinhood, that offer commission-free trading. After Schwab's announcement in October, competitors E*Trade and TD Ameritrade, among others, followed suit. The changing landscape made it harder on a firm like TD Ameritrade, which relied more on commissions, than Schwab, which is more diversified and has assets in deposits, fixed income, and other areas.

As chairman and founder Charles Schwab told CNBC back in October:

We make our money on other relationships -- you might want advice, you might want fixed income or things like that -- we'll make a little bit of money there. But commissions on stocks are now free. ... What we try to do is offer things that customers really want, and they definitely want lower prices.

That change definitely was felt as revenue from trading fees plunged 58% in the fourth quarter year-over-year to $86 million. The company was also hurt by a decrease in interest revenue due to the Fed rate cuts as interest revenue dipped 8%. These losses were somewhat offset by a slight gain in asset management and administrative fees. Overall, net revenue was only down about 2% year over year to $2.6 billion. Schwab held the line on expenses in the fourth quarter compared to the previous year's total. Overall, net income was down 9.5% year over year in the fourth quarter, while earnings per share (EPS) dropped 4 basis points (in other words, fourth-hundredths of a percentage point) year over year to $0.62, as Schwab missed analysts' estimates. For the year, EPS rose 8.1% to $2.69.

But a positive development for the firm was a massive gain in total assets. Schwab crossed the $4 trillion mark, up 6.6% in the quarter and 19.4% for the year. The strong growth in the fourth quarter was buoyed by $77 billion in net new assets and 433,000 new brokerage accounts –- making it the best quarter of the year for growth.

With the bold moves, Schwab looks like a good buy as it moves forward as a major player in the new landscape of a consolidating market.