Please ensure Javascript is enabled for purposes of website accessibility
Log In Help Join The Motley Fool
Free Article Join Over 1 Million Premium Members And Get More In-Depth Stock Guidance and Research
By Reuben Gregg Brewer - Jan 29, 2020 at 9:42AM

These two lithium suppliers are getting hit hard by the market. Is one better equipped to deal with the pain than the other?

Lithium's long-term future is closely tied to the electric vehicle market. On the surface, that sounds like a good thing, as electric cars are increasingly popular. However, there's currently too much lithium available, creating a supply glut that's left the price of this key battery metal in the doldrums, which explains why Albemarle (ALB -4.94%) and Sociedad Quimica y Minera (SQM -3.80%) are off their late-2017 highs by roughly 45% and 55%, respectively. Both are likely to make it through this rough patch, but one is better positioned to deal with weak markets than the other.

Both Albemarle and Sociedad Quimica y Minera (SQM from here on out) have diversified businesses. Albemarle's lithium business accounts for around 42% of adjusted EBITDA, with the rest coming from its bromine and catalyst divisions. SQM's lithium operation makes up about 43% of its gross profit, with the rest derived from its plant nutrition, iodine, potassium, and industrial chemicals segments. Although both are looking to lithium for growth, they each have diversified operations that help offset the current downturn in lithium. 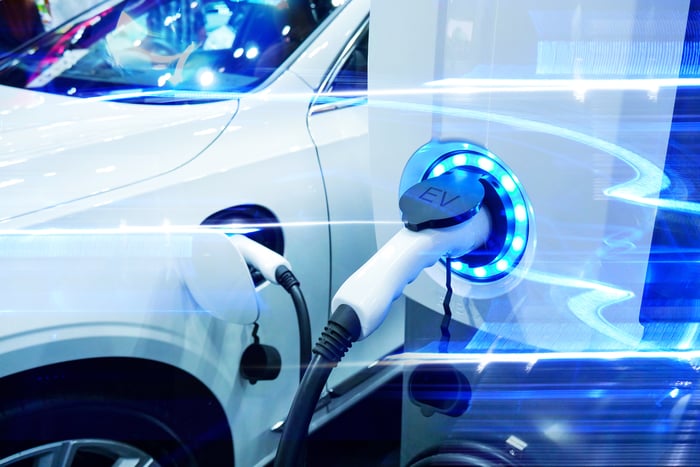 That's a positive thing, because lithium has not been a good market lately. Despite a 39% increase in the number of electric vehicles sold through the first nine months of 2019 (and a 30% jump in average battery size), lithium prices have been quite weak due to abundant supply. And during Albemarle's third-quarter 2019 earnings conference call, CEO Luke Kissam was clear that things weren't likely to improve anytime soon: "We will be dealing with the challenging market conditions for the next 12 months to 18 months."

To be fair, both Albemarle and SQM are likely to survive this period without too much difficulty. But they have had vastly different results as they deal with the weak pricing environment. For example, Albemarle's third-quarter revenue was up 13% and earnings increased by 16%. SQM, on the other hand, didn't fare quite as well. The company's top line fell 13% and earnings plunged 28%.

The key difference is the way in which these two go about selling the lithium they produce. SQM tends to sell on the spot market, while Albemarle favors long-term contracts. Clearly, in a falling price environment, Albemarle's contracts are helping to shield its earnings. This is good, so long as prices strengthen by the time it has to price new contracts. At this point, the company expects the supply-demand imbalance to be worked out by the end of 2020. If that's the case, and lithium prices start to strengthen, Albemarle should be able to take this rough patch in relative stride compared to SQM.

Helping that outlook has been a notable pullback in investing in new production. Albemarle has reduced its planned expenditures, but so have most of the other big players. That includes SQM, which recently put off a go/no-go decision on an expansion until 2021. If demand remains strong, which automaker efforts in the electric vehicle space suggest is likely, this reduction in investment should eventually right the supply-demand imbalance and lead to higher lithium prices. For producers like Albemarle and SQM, it's just a matter of getting through the trough.

Stronger, on the balance

While neither of these lithium producers is in dire straits, Albemarle has a stronger balance sheet. For example, its debt-to-equity ratio of roughly 0.5 is notably lower than SQM's 0.8. Albemarle's debt-to-EBITDA ratio of 2.1 is also lower than SQM's, where the ratio is roughly 3. Albemarle has a stronger foundation, and that gives it an advantage in this matchup, particularly given its preference for long-term contracts. 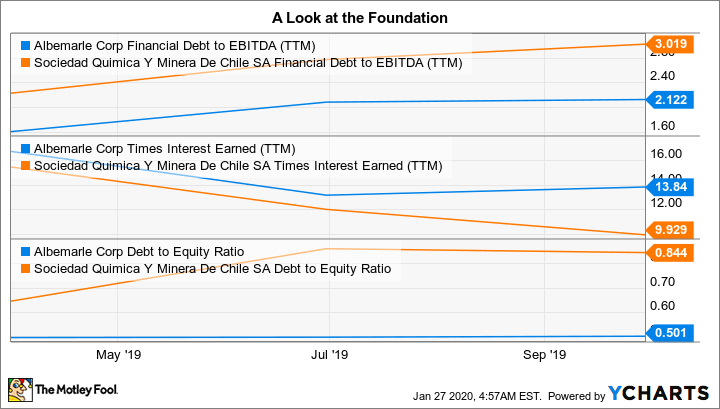 To be fair, while Albemarle covers its interest expenses by a hefty 13 times or so, SQM's coverage of around 10 times isn't exactly a sign of pending doom. Thus, there's no reason to suspect that SQM is struggling under the weight of its debts. But there are other implications for investors. For example, SQM's payout ratio is over 100% right now compared to Albemarle's payout ratio of roughly 25%. Dividend investors looking at this pair should consider these facts carefully. Leverage and the payout ratio are two important factors when considering dividend safety. SQM's 3.3% yield, in the end, appears to be a lot riskier than Albemarle's roughly 1.8% yield when you look at the bigger picture.

If you are looking at Albemarle and SQM today, the big takeaway here is that Albemarle looks more capable of handling the headwinds in lithium. Long-term investors with a conservative bent should lean strongly toward Albemarle. The future of both companies is tied to electric vehicle demand, but one is simply better positioned to deal with the bumps along the way.