Please ensure Javascript is enabled for purposes of website accessibility
Log In Help Join The Motley Fool
Free Article Join Over 1 Million Premium Members And Get More In-Depth Stock Guidance and Research
By Jennifer Saibil - Jan 29, 2020 at 6:19AM

While the move came as a surprise, Nike’s already reaping the benefits, and other companies may follow suit.

Nike (NKE -5.63%) is the biggest athletic company on the planet, with $39.1 billion in revenue for fiscal year 2019 and a market capitalization of $163 billion. That gives it the ability to make moves that smaller companies can't, and it also gives the company the opportunity to lead retail trends.

One intrepid move it recently made was to stop selling directly through Amazon. This was bold because current sentiment counts the Amazon platform as necessary for sales, since everyone is on Amazon. But Nike has pulled it off, and other companies have taken notice.

Although it seems Wall Street has forgotten, in 2017 Nike was facing some serious challenges. Rival Adidas (ADDYY -6.35%) had taken over the top spot in U.S. sales, and Nike's stock price had flattened. 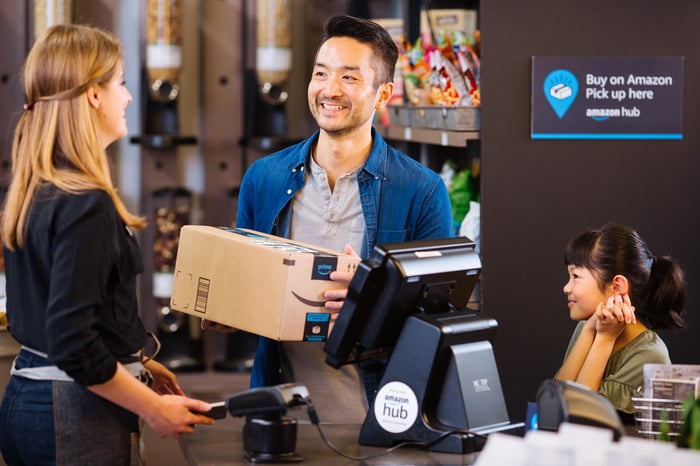 At that point the company created the "Triple Double" strategy, the "high-impact capabilities of innovation, speed and direct connections with consumers strategy to boost sales." The initiative was implemented across all operations and obligates the company to provide quick and personal service for customers.

This has fueled a resurgence in sales and share price. Outgoing CEO Mark Parker said in a letter to shareholders that "In FY19, new innovation platforms drove roughly 100% of our total incremental growth. Digital revenue grew 35% on a currency neutral basis, as we expanded our NikePlus membership base to 170 million members."

As this plan got under way, Nike initiated a pilot program to sell directly through Amazon. The change was meant to curb "gray market," or unauthorized, sales of Nike products on that platform. Nike wanted greater control over its goods sold on Amazon, and Amazon promised to be vigilant in rooting out counterfeit and unauthorized goods. But that didn't pan out, and as part of its efforts to strengthen direct-to-customer business, Nike canceled the deal.

Right now, Amazon is still expected to own about 38% of the e-commerce market, and this won't make a dent in the short term. Products from most of the companies that have pulled out, or that never signed on in the first place, can still be purchased on Amazon as gray market goods. Third-party sellers account for more than half of all Amazon's sales. Longer term, Amazon will have to fend off the threat of DTC as it becomes more popular with customers who have purchasing power.

How is Nike doing?

Nike has been seeing tremendous success with its direct-to-customer business, with NIKE brand revenue of 12% on a currency-neutral basis in the second quarter of 2020 and the Nike and Sneakers app driving 38% digital growth. Share price for this blue chip company has increased almost 12% since the announcement. The move has also signaled to investors that companies with a direct-selling strategy may have a strong advantage in the coming years as retail continues to evolve, with Nike leading the way.

How this affects retail

In some ways, Nike can make its own rules, and those rules don't have to apply to anyone else. Many smaller companies need Amazon and wouldn't make it on their own. Others have a different selling model and don't rely on Amazon regardless of Nike's decision. But Nike's realization that it needs to draw back from the marketplace and focus on its direct business is a sign of the times.

Many other companies have been successful doing direct-to-consumer business only, such as Warby-Parker and Glossier. These companies don't need Amazon because they rely heavily on millennials' use of influencer recommendations to make decisions.

Companies that offer direct sales have many advantages, including a stronger hold on customer data and a better chance at creating loyalty. Nike's focus on community as part of its DTC business gives it the same edge and lack of need for Amazon.

What's been happening since

Nike wasn't the first company to stop selling directly on Amazon, but it made the biggest splash. Since the announcement, furniture giant IKEA has also stopped selling on Amazon. But there hasn't been any mass exodus.

Smaller companies will find it hard to stand on their own. They don't have the marketing budget or logistics capabilities that Amazon gives them. But bigger companies have the name recognition to bring in customers and the budget to deliver the way their customers want.

According to a Deloitte study, "The emphasis on understanding what consumers really want continued to expand the gap between the leaders and everyone else who followed." Over the holidays, 85% of customers chose free shipping, which the smaller guy can't offer, over fast shipping. They were also focused on convenience, such as taking care of all of their shopping in one place. That's how Amazon dominates.

The bottom line is that Nike's pullback from Amazon is both a cause and an effect of the DTC trend; it's becoming a more popular method of business anyway for companies who can make it happen, but Nike's strike is bringing it out into the open.