Please ensure Javascript is enabled for purposes of website accessibility
Log In Help Join The Motley Fool
Free Article Join Over 1 Million Premium Members And Get More In-Depth Stock Guidance and Research
By Rich Duprey - Jan 29, 2020 at 9:38AM

But with hard seltzer's sales pop, the brewer might not even care.

Boston Beer (SAM 4.54%) is about to open a 14,000-square-foot taproom in historic Faneuil Hall in Boston in the shadow of the statue of patriot Samuel Adams, the namesake of the brewer's flagship craft beer.

Although this is the third beer hall it's opened over the past few years, and the trend among beer drinkers has been to drive consumption locally toward such brewpubs, it doesn't seem it will be enough to resurrect the brewer's beer sales. 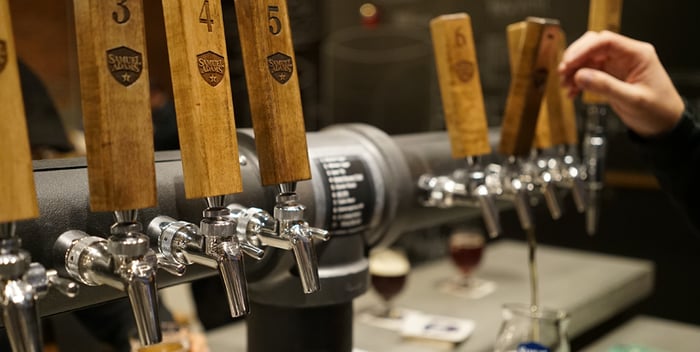 Boston Beer will be opening its third taproom at Faneuil Hall in Boston on Jan. 30. Image source: Boston Beer.

Today, Boston Beer is less a brewer than it is whatever you call a company that makes seltzer. Macquarie analyst Caroline Levy has said that three-quarters of the company's sales come from Truly hard seltzer and other non-beer drinks.

Of course, the problems seen by the brewer (I'll still go with that term) stem from the beer industry at large. The biggest breweries are suffering from falling sales while craft breweries are still recording growth.

And the split is the same within the craft beer industry itself. The biggest brewers like Boston Beer are in decline, but those making fewer than 15,000 barrels annually, the microbreweries, are witnessing sustained growth.

One other segment seeing higher sales is brewpubs. According to industry trade group Brewers Association, brewpubs -- which it defines as a "restaurant-brewery that sells 25 percent or more of its beer on-site and operates significant food services" -- are on the rise, and in fact, are growing at a faster rate than they were in 2018.

Pull up a chair

Taprooms are similar to brewpubs except they don't have significant food service operations. When Boston Beer opened its first taproom in 2017 at its brewery in the Jamaica Plain neighborhood in Boston (it opened its second one in Cincinnati in 2018), there seemed a good chance that tapping into this trend could be a way to stem the hemorrhaging sales at Samuel Adams, which was in the midst of a multiyear decline.

However, the situation hasn't improved at all since then, as Boston Beer has recorded five straight years of consecutive quarterly declines in depletions, or sales to distributors and retailers, which is seen as an industry proxy for consumer demand.

The problem is, for a brewer the size of Boston Beer, a couple of taprooms here and there can't move the needle. For a microbrewery or a regional brewer, taproom and brewpub sales will be more meaningful, but when you're pumping out 4 million barrels annually, you would need a large network of beer halls to make a difference. Even if the company's beer production is only about a quarter of the total, it still wouldn't sell enough beer to make a difference.

That's why Boston Beer is going so hard at seltzer. Originally expected to be more of a seasonal beverage for the summer months, hard seltzer seems to have legs and the Summer of Seltzer could be turning into the fall and winter of the drink, too.

We'll get a better picture of how well seltzer sales are holding up in the cold months when Boston Beer reports earnings in the coming weeks, but it is using the time before then to find more occasions where it can sell the effervescent beverage.

One place where it is looking to place hard seltzer is on tap in bars and restaurants. Called Truly on Tap, it is being positioned as an alternative to light beer and spirits. Constellation Brands has already pulled its Smirnoff vodka-based seltzer because of lackluster performance.

After suffering falling sales in 2016 and 2017, Boston Beer made a U-turn thanks to seltzer, which also allowed it to raise the low end of its full-year earnings guidance, putting it at $8.70 to $9.30 per share. That suggests seltzer sales will continue to grow at a frothy pace and dispel notions beverage sales will soon go flat.

The same can't be said for beer. There are around 7,500 breweries in operation now, and over one-third of them are brewpubs. Boston Beer opening a third taproom on Jan. 30 will hardly be felt by the brewer, let alone the industry, and unfortunately it won't change the trajectory Samuel Adams is on either.