Please ensure Javascript is enabled for purposes of website accessibility
Log In Help Join The Motley Fool
Free Article Join Over 1 Million Premium Members And Get More In-Depth Stock Guidance and Research
By Danny Vena - Updated Jan 29, 2020 at 7:12AM

Expectations were high going into Apple's (AAPL 0.17%) fiscal first quarter earnings report. After more than a year of falling sales, the iPhone was a key question mark, but recent reports suggested that demand of the iconic device was booming, particularly in China. Apple confirmed the rumors today, reporting all-time record revenue and profits in the process, on the back of strong sales of iPhones, wearables, and services.

Apple reported revenue of $91.8 billion, up 9% year over year, soaring past both analysts' consensus estimates and the high end of management's guidance, which topped out at $88.5 billion and $89.5 billion, respectively.

The iPhone was the headliner, returning to growth for the first time since 2018, with revenue from the device up 7.6% year over year, and representing 61% of Apple's total revenue. This is particularly notable in light of the lower starting price of the iPhone 11. 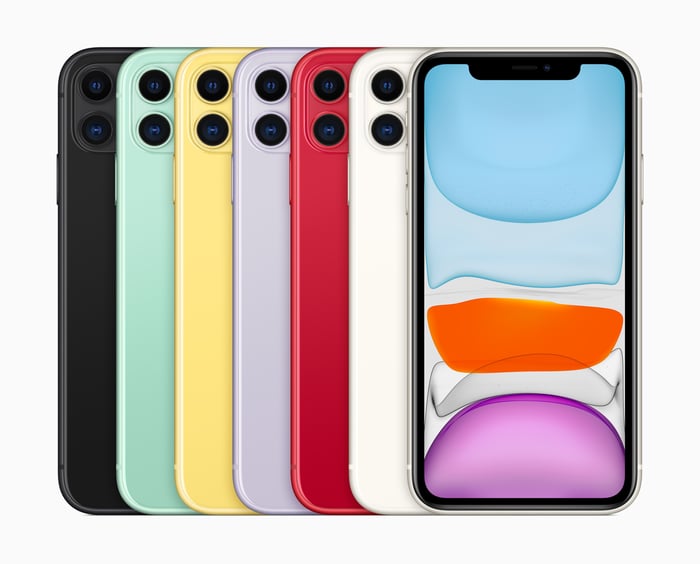 The strong top-line growth translated to soaring profits, with earnings per share of $4.99, up 19% year over year, and easily outpacing expectations of $4.55.

The iPhone wasn't the only contributor to Apple's stellar results. Wearables have become a particularly important business to the company in recent years, and the segment did not disappoint. Wearables, home, and accessories brought in more than $10 billion, up 37% year over year, and growing to nearly 11% of total sales. On the conference call, Apple CEO Tim Cook said that the wearables business grew by 44%, led by strong demand for AirPods and Apple Watch.

Apple's services segment also did its part to boost the company's results, growing to $12.7 billion, up 17% year over year. The services business has generated revenue of $48 billion over the trailing-12-month period, and over the next several quarters, Apple is on track to make good on Cook's promise to double services revenue by the end of 2020. The current run rate is $50.86 billion, just below the company's stated goal of $50.93 billion.

"We are thrilled to report Apple's highest quarterly revenue ever, fueled by strong demand for our iPhone 11 and iPhone 11 Pro models, and all-time records for services and wearables," Cook said of the quarter. "During the holiday quarter our active installed base of devices grew in each of our geographic segments and has now reached over 1.5 billion."

Even with the uncertainty resulting from the coronavirus, Apple provided a strong forecast for the second quarter. Management is guiding for revenue in a range of $63 billion to $67 billion, which would represent year-over-year growth of between 8.6% and 15.5% -- this is particularly robust given this quarter's 9% growth.

On the conference call, Apple CFO Luca Maestri noted that the unusually wide margin was the result of the uncertainty in China, as the tech giant has a number of vendors situated near the coronavirus outbreak, which could affect its second-quarter results.

The strong forecast illustrates management's confidence in the future, as it puts Apple's guidance ahead of Wall Street estimates, which were calling for revenue of $62.45 billion and earnings per share of $2.36.

Given the better-than-expected results of the just completed quarter, and the strength of management's forward-looking view, expect analysts to issue a flurry of Apple stock price revisions in the days and weeks to come.