Please ensure Javascript is enabled for purposes of website accessibility
Log In Help Join The Motley Fool
Free Article Join Over 1 Million Premium Members And Get More In-Depth Stock Guidance and Research
By Adria Cimino - Jan 30, 2020 at 7:30AM

Here are three biotech companies with solid, revenue-driving products to add to portfolios while the price is right.

When looking at biotech stocks, a big point of focus should be on the products driving revenue now or the solidity of the pipeline, which will drive revenue later.

Acadia Pharmaceuticals (ACAD 1.77%), Alexion Pharmaceuticals (ALXN), and Seattle Genetics (SGEN 3.06%) are three companies that fit the bill. And with product news in their favor, now is the time to add these stocks to your portfolio. 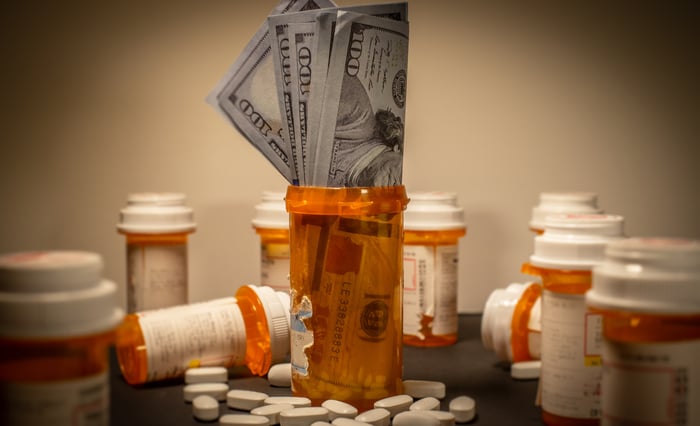 Acadia's Nuplazid is the only U.S. Food and Drug Administration-approved treatment for hallucinations and delusions associated with Parkinson's disease psychosis. About one million Americans have Parkinson's disease, and according to the American Parkinson Disease Association, more than half will at some point develop this non-motor symptom.

Acadia's annual revenue has climbed since the product was approved in 2016, and in the most recent quarter, the company said net sales of Nuplazid soared $94.6 million, up 62% from the same quarter last year. As a result, Acadia lifted guidance for 2019 net sales of the drug to the range of $330 million to $340 million, up from the earlier range of $320 million to $330 million.

The compound behind the Nuplazid name is called pimavanserin, and Acadia is testing it in three additional indications, currently in phase 2 and 3 trials. In December, the company reported favorable top-line results from its phase 3 trial in dementia-related psychosis -- another treatment area lacking an FDA-approved drug -- and said it would meet with the FDA in the first half of 2020 regarding a submission for that indication. According to the Gerontological Society of America, more than two million Americans with dementia experience delusions.

Nuplazid's sales so far and the compound's potential to suit other indications -- addressing unmet needs -- make Acadia's stock attractive from a product perspective.

Alexion, which focuses on rare diseases, is another company that has increased revenues steadily over the past few years, and recent news should keep that trend going. Late last year, the FDA approved Ultomiris for the treatment of atypical hemolytic uremic syndrome (aHUS), and regulatory agencies in Europe and Japan issued approvals of its drug Soliris for adults with neuromyelitis optica spectrum disorder. In aHUS, abnormal blood clots form in blood vessels in the kidneys and lead to serious medical problems, while neuromyelitis optica spectrum disorder causes inflammation of the optic nerve and spinal cord.

At the start of this year, Alexion announced the beginning of a pivotal phase 3 trial of Ultomiris in amyotrophic lateral sclerosis, a disease that leads to progressive degeneration of nerve cells. Alexion has more than 20 investigational drugs in the pipeline, from preclinical to late-stage clinical trials.

This hefty pipeline, and a product portfolio of four drugs, along with the planned acquisition of clinical-stage biotech Achillion Pharmaceuticals (ACHN), are reasons to be optimistic about future earnings -- and therefore, share performance. Recent reports show Alexion can deliver, with a 23% increase in total third-quarter revenue to $1.26 billion and sales gains for all drugs except Ultomiris, which hadn't yet been approved in the year-earlier period.

This company now has two products on the market after the FDA in December granted Padcev accelerated approval for locally advanced or metastatic urothelial cancer, the most common type of bladder cancer. The approval is specifically for adult patients who have previously received platinum-based chemotherapy and a treatment that blocks proteins in the body that help cancer cells. A key point is that Padcev is the only FDA-approved drug for this patient set. Though it's unclear how many patients the drug may serve initially, the general market for this type of cancer is growing. In the U.S., about 80,000 new cases of bladder cancer are diagnosed per year, and about 90% of cases are of urothelial type.

In late December, Seattle Genetics said it submitted a New Drug Application for tucatinib, its investigational treatment for HER2-positive breast cancer, to the FDA. In HER2-positive breast cancer, tumors have high levels of a protein that promotes cancer cell growth. Earlier, the FDA granted tucatinib breakthrough status based on data from the treatment's pivotal clinical trial. Breakthrough designation is meant to speed up the FDA review process for drugs that treat serious medical conditions.

In the most recent earnings report, Seattle Genetics reported a 32% quarterly gain in sales of its first drug, Adcetris, a treatment for Hodgkin lymphoma, and an increase in royalty revenue from the sales of the product outside the U.S. and Canada. Though the company isn't profitable, revenue has climbed for at least the past three years, and with the addition of Padcev and maybe even tucatinib in the not-too-distant future, it's reasonable to count on more gains.

Why buy the shares now?

In the case of each of these biotech companies, earnings should benefit this year from either a product or products with strong growth or a newly launched drug. And for Acadia and Alexion, optimism linked to late-stage clinical trials may boost the shares, while hope for a nod from the FDA on tucatinib may lift Seattle Genetics. As for potential share price gains, for Acadia, Wall Street predicts 42% upside from the current share price and a 38% increase for Alexion. Seattle Genetics has less to gain, according to the average analyst estimate, with about 5% upside from this point.

That said, these aren't stocks to buy for the short-term, but instead to add to your portfolio at this decent entry point. These companies will benefit from increasing product revenue over time -- which should result in a healthy long-term stock market performance.