Both Johnson & Johnson as well as Pfizer could face new competition in the prostate cancer market.

Bayer (BAYR.Y -0.97%) announced on Thursday that its prostate cancer drug, Nubeqa, just scored a major late-stage clinical victory. The treatment, which is a relative latecomer to the prostate cancer scene in comparison to some of its rivals, showed strong results in delaying tumor growth in patients with non-metastatic castration-resistant prostate cancer (nmCRPC).

The phase 3 Aramis trial showed that patients that had taken Nubeqa alongside androgen deprivation therapy (ADT) had improved survival times in comparison to nmCRPC patients that were taking just a placebo alongside ADT. Although the complete data won't be available until later at a future medical meeting, it was confirmed that the study met both its primary and secondary endpoints of improving patient survival time. 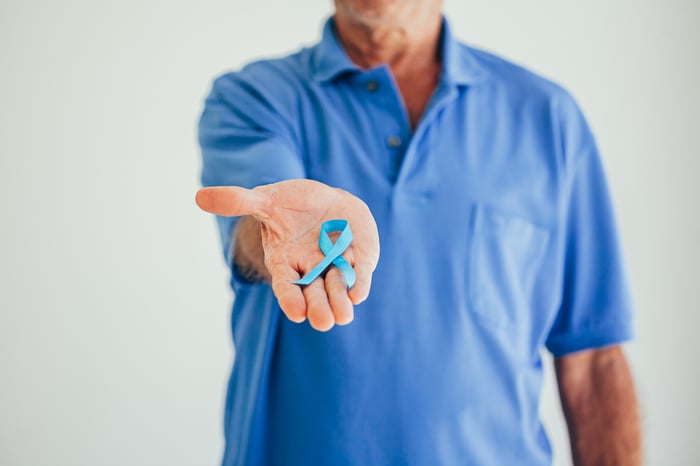 Bayer's top-selling drugs, a macular-degeneration treatment called Eylea and a blood-thinner known as Xarelto, are fast approaching patent expiration. As such, the pharmaceutical giant is doing its best to push sales of its newer drugs, such as Nubeqa.

Both Johnson & Johnson's (JNJ 1.46%) Erleada as well as Pfizer's (PFE 3.00%) Xtandi are drugs that already target patients with prostate cancer. However, it's uncertain whether these new results will be enough to give the drug an edge over its competitors. Johnson & Johnson announced last year that Erleada alongside ADT reduced the chance of patient death by 25% in comparison to just the ADT-placebo combo.

Bayer's Nubeqa will likely also face challenges from healthcare watchdog groups, who have refused to accept other prostate cancer drugs due to their cost effectiveness. England's top drug watchdog, the National Institute for Health and Care Excellence (NICE), recently turned down Pfizer's Xtandi for exactly that reason.