Please ensure Javascript is enabled for purposes of website accessibility
Log In Help Join The Motley Fool
Free Article Join Over 1 Million Premium Members And Get More In-Depth Stock Guidance and Research
By David Haen - Jan 30, 2020 at 8:00AM

This developer of diagnostic tests will continue to drive the personalization of cancer treatment.

Exact Sciences (EXAS 0.02%) emerged as a leading developer of cancer diagnostics following the successful development and launch of Cologuard, its non-invasive test for colorectal cancer. While the initial adoption of Cologuard continues to grow, Exact continues to broaden its product offerings.

Cancer diagnostic companies seek to capitalize on new technologies for earlier detection and the ever-growing shift toward personalized medicine. Early detection using a non-invasive approach, like a simple blood test, can potentially save lives by starting intervention sooner. 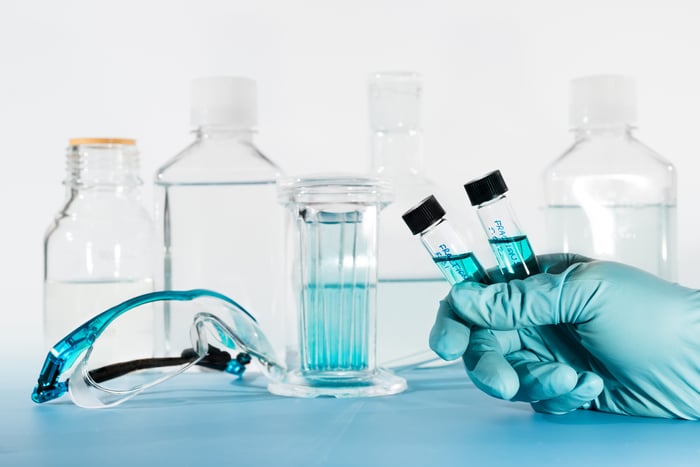 For personalized medicine, diagnostic tests allow oncologists the ability to match specific treatments for patients based on their cancer's molecular and genomic profile. This should increase the odds of a specific cancer treatment working and eliminate patients receiving drugs with little to no chance of success.

Cologuard provides an alternative, and more comfortable, method for detecting colon cancer. As a non-invasive test, it competes with colonoscopy, a common procedure that requires anesthesia. Last fall, Exact received approval from the Food and Drug Administration for the use of Cologuard in patients as young as 45 years of age. The prior approval was for those aged 50 and older. Again, this gets back to the underlying concept of earlier detection and intervention to spare lives.

Exact did not stop there. Its research and development focuses on developing new liquid biopsy tests. This includes a new blood-based diagnostic for hepatocellular carcinoma (HCC), the most common form of liver cancer. According to the World Health Organization, more than 780,000 people die each year from liver cancer, making it the fourth leading cause of cancer deaths.

The results of a large clinical trial using Exact's HCC test were presented last November at a major medical meeting. It was selected as "Best of the Liver Meeting" by the conference organizers and, even more impressively, gained the FDA's Breakthrough Device designation. The latter enables greater interaction between Exact and the FDA to expedite bringing the test to the market.

Growth through acquisitions and partnerships

In December, Exact completed its $2.8 billion purchase of Genomic Health. The marquee product from the acquisition is Oncotype DX, a suite of four non-invasive diagnostic tests for breast and prostate cancers. These tests can predict which patients will likely respond to certain types of treatment such as chemotherapy. With this information, doctors can select optimal treatment for their cancer patients and prevent subjecting patients to therapies with little to no chance of working.

Three of the Oncotype DX tests require the samples sent to Exact's lab in California to be analyzed. Then a report is sent back to the doctor. The liquid-based test for prostate cancer is run by Epic Sciences, a collaborator of Exact.

Exact plans to expand upon the Oncotype DX platform to include additional cancers. The genomic profiling of a patient's tumor continues to become a common step prior to treatment. One goal is to reduce the turnaround time of the tests.

Genomic Health, prior to Exact's purchase, entered into a collaboration with Belgian-based Biocartis to allow the tests to be performed using Biocartis' system. This allows a local laboratory or hospital to run the Oncotype DX test using the Biocartis sample cartridge and analyzer. Importantly, this can allow test results within hours instead of days if the sample must be shipped to a specialized lab. In the long run, this could be a productive avenue for Exact to funnel more diagnostics as they become approved.

Where will Exact be?

Exact will continue to specialize in non-invasive diagnostics, based both on tissue and liquid biopsies. Over the next few years, liquid biopsies will take a more prominent role. Compressed turn-around times for the test results will also be a driver of R&D efforts. It will be supplemented by collaborations such as those with Epic Sciences and Biocartis.

In five years, Cologuard will be a routinely used test. Oncotype DX will continue to be used for breast and prostate cancers as well as some new types of cancer. Exact's blood-based HCC test currently in development will be approved and gaining traction on a global basis. Additional acquisitions, like Genomic Health, to provide an expanded portfolio of tests could also be in the cards. Alternatively, a purchase of a company like Biocartis could shift the testing from centralized lab services to the local level.

Exact has rewarded patient biotech investors historically. It gained 226% in the past five years. We will have to wait to see what the next five years holds.