Please ensure Javascript is enabled for purposes of website accessibility
Log In Help Join The Motley Fool
Free Article Join Over 1 Million Premium Members And Get More In-Depth Stock Guidance and Research
By Lawrence Nga - Jan 31, 2020 at 8:16AM

These crucial questions could determine the Chinese e-retailer's future direction.

Widely regarded as the Amazon.com of China, JD.com (JD 2.69%) went through challenging times in 2018, with revenue growth slowing down and margins contracting. Nevertheless, it seems like the company has finally resolved those issues in 2019. Revenue growth accelerated, while GAAP operating margin more than tripled. To figure out whether the company is out of the woods, we'll need its upcoming Q4 earnings to answer three key questions. 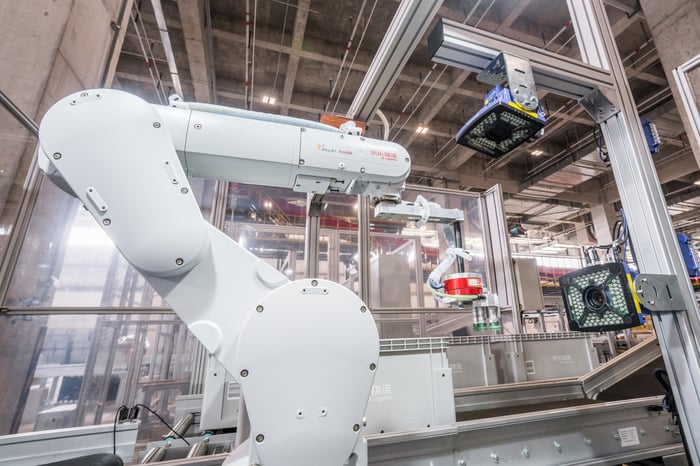 A large robot arm picks items for packing at a JD.com warehouse in Shanghai. Source: JD.com.

1. Can JD.com sustain its growth rate?

JD.com is a favorite among growth investors thanks to its ability to grow its revenue at breathtaking rates. From 2012 to 2018, its net revenue grew more than tenfold from RMB 41.4 billion (around $6.6 billion at the time) to RMB 462 billion (roughly $66 billion) -- a compound annual growth rate around 49%. The growth rate, however, has declined materially as the company grows bigger. It hit a low of 21% in the first quarter of 2019.

Yet the decline in year-over-year growth seems to have bottomed out in the Q1 2019, and it has since rebounded to 23% and 29%,  respectively, in 2019's second and third quarter . In particular, net service revenue for the third quarter of 2019 grew 47% year-on-year to RMB16.0 billion.  This is important since  service revenues -- representing 12% of the company's total revenue in the most recent quarter -- generally have better margins than that of the first-party retail business. That partially explains the companywide expansion of JD.com's gross margin from 14.1% to 14.7% for  the first nine months of 2019.

Thus, investors should keep an eye on the company's growth rate for the final quarter of 2019. If JD reports a stronger, or at least, comparable growth rate, it might signal that the worst is probably over.

2. Is retail margin improving (or at least stable)?

One of the general concerns that investors have when investing in JD.com is whether its primarily online retail business can generate sustainable profits over the long term. The company's aggressive strategy of using low prices to delight customers keeps its operating margin tiny.

But in JD.com's most recent earnings call, CFO Sidney Huang reiterated that the retail business is well-positioned to generate high-single-digit profit margins. This is possible as it leverages its economies of scale to achieve better procurement prices and operating efficiency -- the same reason behind the expansion of operating margin to a record 3.3% in the third quarter of 2019.

Going forward, JD is well-positioned to continue this margin expansion trajectory as the business scales further -- a trend for which we'll want to see clear signs in the next earnings release. Ideally, margin should expand further, or at least stick close to its most recent range.

3. How are new ventures performing?

Like many Chinese technology conglomerates, JD's business empire spans a wide range of activities, including logistics, finance, healthcare, and more. Many of these new ventures leverage JD's existing retail business. For example, JD Logistics (its logistics arm) initially served only JD's own retail business, but has now become a stand-alone company that also provides logistics services to external customers.

These new ventures are highly important to the company's efforts to sustain its high growth rate. These businesses grew revenue at 62% in the third quarter of 2019, much higher than the 27% growth rate of the retail business. Moreover, Bloomberg reported that JD is planning to list its logistics units this year with a targeted valuation of $30 billion. The IPO, if it materializes, could allow JD to unlock significant shareholder value.

JD reported solid numbers in the previous quarter, indicating that it might have addressed the problems of slowing revenue growth and contracting margins.

Still, we'll closely watch the three areas mentioned above in its next quarterly earnings release. If all three come in positive, it's a good sign that the worst is probably over for the company.