Please ensure Javascript is enabled for purposes of website accessibility
Log In Help Join The Motley Fool
Free Article Join Over 1 Million Premium Members And Get More In-Depth Stock Guidance and Research
By Will Healy - Jan 31, 2020 at 7:45AM

Beyond Meat investors have more worries regarding this meat-substitute manufacturer than just a fluctuating share price.

Beyond Meat (BYND 7.18%) has seen a remarkable recovery in 2020. After the stock fell by nearly 70% in the second half of last year, some began to question whether the plant-based meat-substitute manufacturer could satisfy market expectations.

Beyond Meat stock has staged a dramatic recovery in January, rising by more than 50% since the end of last year. While Beyond Meat could continue to rally, it faces four challenges that bode poorly for the future of the company.

One concern pertains to its high multiple. Beyond Meat trades at a forward P/E ratio of just over 280. Moreover, with 76.2% revenue growth expected for next year, expectations likely drive the interest in Beyond Meat stock.

To be sure, stocks often rise despite elevated multiples. In recent years, such valuations became common for marijuana stocks and some tech sectors. Companies like Amazon have persisted for years in holding price-to-sales ratios well above S&P 500 averages. 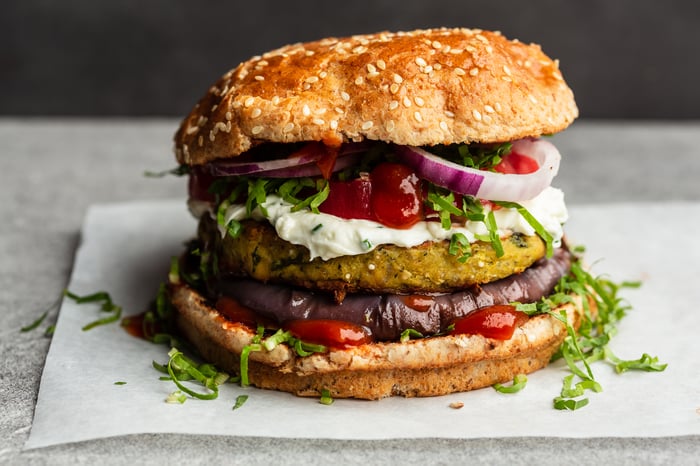 However, such valuation numbers are unusual for a food stock. The food industry is recession-proof, but these stocks tend not to exhibit high P/E ratios. Tyson Foods trades at 11.3 times forward earnings. Hormel Foods supports a significantly higher multiple, but at a forward P/E ratio of about 25.6, it does not compare to Beyond Meat's valuation.

Peers like Tyson and Hormel also create competitive issues for Beyond Meat. Much of the talk of competitors centers around privately held Impossible Foods, another upstart in this industry. Now, more established food producers plan to enter this space. These companies have a history of steady profits and solid balance sheets that will make them difficult to challenge.

Moreover, while plant-based meat has received some positive reviews, meat alternatives are nothing new. In the late 19th century, the founders of Kellogg's attempted to market a faux meat product. The marketplace has seen these products come and go for more than 100 years.

Analysts also tend to ignore an ongoing competitor: meat. The Humane Research Council found that 84% of vegetarians eventually return to eating meat. The majority of those abandon vegetarianism within less than a year.

Many have also expressed concerns about plant-based meat itself. John Mackey, the CEO for Amazon-owned Whole Foods grocery chain, described this food as "highly processed," which he did not think was healthy. Many dietitians have stated that this meat substitute is not necessarily healthier than beef.

Furthermore, consumers may not want to consume it long term. Restaurant Brands International chain Tim Hortons announced that it plans to discontinue its trial of Beyond Meat products. Although the Canadian restaurant chain did not rule out bringing back these products in the future, this news does not bode well for Beyond Meat.

Unlike Impossible Foods, which had to pull out of talks with McDonald's due to capacity constraints, Beyond Meat has expanded capacity as demand warrants. Last summer, the food producer unveiled plans to double production capacity in 2019 and increase capital expenditures in 2020 to bring more of its production in-house.

But is that enough? The production of plant-based meat depends on a healthy supply of pea protein. Unfortunately, switching farmers from other crops to peas may take time. Farmers may need to make large investments in equipment to make this happen.

Moreover, it remains unclear whether soil conditions in many areas would accommodate this crop. Third, if these companies demand organic peas, that could slow expansion. According to USDA rules, land used to grow non-organic crops needs three years before food grown on that land can receive "organic" certification.

Beyond Meat faces numerous challenges that could undermine its stock, and possibly, the company itself.

When looking at its forward P/E ratio, it appears to trade at multiples more in line with a hot tech company than a food producer. While massive revenue growth has helped to drive that valuation higher, competition from larger, more established names could soon undermine that growth.

This comes at a time when restaurants have begun to reconsider carrying Beyond Meat products. Further, while it has shown it can expand capacity as needed, a shortage of a critical crop could slow its ability to raise production.

Plant-based meat may retain its staying power among select customers -- but that doesn't mean Beyond Meat stock will sustain its current popularity among traders.