Buyers are snapping up AirPods Pro as fast as Apple can produce them, and the AppleWatch shows solid growth and great potential.

Apple (AAPL 2.45%) reported fourth-quarter earnings on Jan. 28, and the numbers exceeded analysts' expectations. One of the areas of incredible growth for Apple was in the segment that includes wearables, which grew a whopping 37% in the quarter to reach $10 billion in revenue.

Consumers cannot seem to get enough of Apple's wearable products. AirPods continue to sell out despite production increases. Additionally, Apple's market share in the smartwatch category is growing, at the same time the market for smartwatches is growing as well. 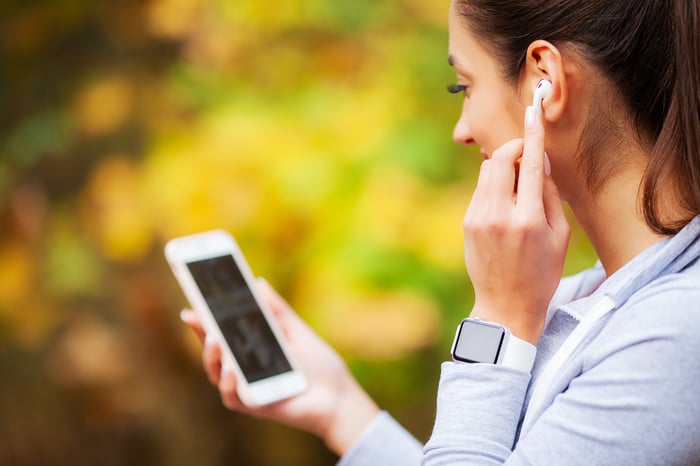 Industry forecasts for wearables are robust

The Apple Watch is the other significant product in the wearables segment. Global smartwatch shipments are expected to grow from 69 million units in 2019 to 109 million units in 2023, which is a 16% compounded annual growth rate. Importantly, average smartwatch prices are roughly double average wireless earwear prices. Furthermore, Apple's smartwatch market share grew from 45% to 48% in the past year.

The potential for innovation in health services with Apple Watch and AirPods is an exciting development with all-encompassing benefits. CEO Tim Cook often says, "Apple's greatest contribution in the long run is going to be to people's health." According to a report by Morgan Stanley, Apple's healthcare market opportunity could be between $15 billion and $313 billion by 2027. Admittedly, the range is broad and many years in the future. However, the upside is huge, and the CEO is telegraphing a long-term interest in the healthcare market.

The overwhelming demand for AirPods Pro

AirPods are becoming an ever-increasing presence in people's ears. The popularity of Apple's wearable products was apparent in its Q1 earnings report, where the segment that includes them experienced 37% growth from the prior year.

Demand is still outpacing supply for AirPods Pro. If you want to purchase AirPods Pro from Apple's website, they will not be available to be picked up or delivered for a month. Similarly, the AirPods Pro are temporarily out of stock on other major e-commerce websites. The imbalance started around the holiday shopping days following Black Friday and has continued even after Apple has doubled production of the wireless noise-canceling headphones.

In response to a question from an analyst during Apple's fiscal Q1 conference call alluding to the shortage, CEO Tim Cook said, "I'm hopeful that the Series 3 will come into balance during this quarter on AirPods Pro. ... We seem to be fairly substantially off there, and we're working very hard to put in additional capacity." Demand for the AirPods Pro is insatiable, and CEO Tim Cook referred to the supply-demand imbalance as being "substantial." Therefore, it seems reasonable to expect sales of AirPods Pro to continue growing as production increases in the near term.

While many investors focused on iPhone and services revenue, the segment that includes wearables has conducted a stealthy expansion over the last few years, providing Apple with increases in sales and diversification benefits, which are both favorable to this tech stock's valuation. All signs point to a continued rise in Apple's wearable business as the size of the market and Apple's share of the market continue to grow simultaneously.