Please ensure Javascript is enabled for purposes of website accessibility
Log In Help Join The Motley Fool
Free Article Join Over 1 Million Premium Members And Get More In-Depth Stock Guidance and Research
By Keith Speights - Jan 31, 2020 at 7:00AM

But Edwards' momentum stalled somewhat during January. That could change, though, after the company reported its fiscal 2019 fourth-quarter and full-year results after the market closed on Thursday. Here are the highlights from Edwards' Q4 update. 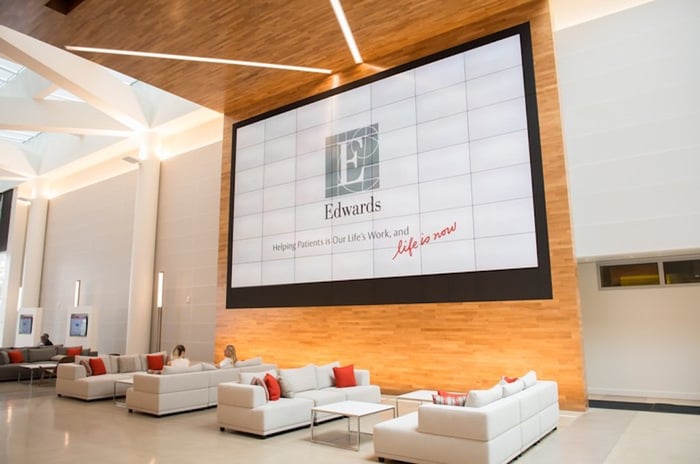 Edwards Lifesciences announced Q4 revenue of $1.2 billion, a 20% increase from the $977.7 million reported in the same quarter of the previous year. This result topped the average analysts' revenue estimate of $1.14 billion.

The company reported net income in the fourth quarter of $280.2 million, or $1.32 per share, based on generally accepted accounting principles (GAAP). Edwards' bottom line reflected significant improvement from the GAAP earnings of $7 million, or $0.03 per share, recorded in the prior-year period.

Edwards' adjusted non-GAAP earnings in Q4 came in at $1.46 per share, up nicely from the $1.17 per share posted in the same quarter of 2018. However, this figure fell below the consensus Wall Street earnings estimate of $1.49 per share.

The big story for Edwards Lifesciences in Q4 was the tremendous performance from its transcatheter aortic valve replacement (TAVR) business. TAVR sales soared 30% year over year to $763 million, with the U.S. market driving much of that growth.

Edwards' critical care unit also performed well, with sales jumping 12% year over year to $199 million. The company attributed this growth to strong demand for its HemoSphere advance monitoring platform as well as continued customer adoption of its Smart Recovery products.

It was a different picture for Edwards' transcatheter mitral and tricuspid therapies (TMTT) business. The company reported Q4 TMTT sales of only $7 million. Sales were weighed down by Edwards' voluntary field corrective action for its PASCAL system.

Edwards also experienced some headwinds with its surgical structural heart products. Sales fell 1% year over year to $205 million. The company said that this decline resulted from lower surgical aortic valve procedures performed in the U.S. as adoption of its TAVR products increased.

Edwards Lifesciences is more optimistic about 2020 now than it has been. The company boosted the lower end of its full-year 2020 revenue guidance to $4.6 billion from $4.5 billion, with the upper end of the range staying at $5 billion. It also revised its full-year adjusted earnings guidance to between $6.15 and $6.40 per share, up from its previous outlook of adjusted earnings per share (EPS) between $6.05 and $6.30.

The company estimates that its Q1 total sales will be between $1.15 billion and $1.2 billion. Analysts were expecting Q1 sales of $1.14 billion. Edwards projects adjusted EPS in the first quarter between $1.49 and $1.59. The midpoint of that range is higher than the average analysts' estimate of $1.50.

Not all healthcare stocks are on track to perform as well as Edwards expects that it will this year, with some expressing concerns about the impact of the coronavirus outbreak that began in China and has spread to other countries. However, CEO Michael Mussallem said that his company's transcatheter-based products "positions us very well for 2020 and beyond." Investors liked what they saw with the company's guidance, with shares rising more than 3% in after-hours trading on Thursday.