Please ensure Javascript is enabled for purposes of website accessibility
Log In Help Join The Motley Fool
Free Article Join Over 1 Million Premium Members And Get More In-Depth Stock Guidance and Research
By Demitri Kalogeropoulos - Jan 31, 2020 at 7:53AM

The cruise giant posts its 2020 outlook in just a few days.

Investors have some big questions heading into Royal Caribbean's (RCL -3.08%) fourth-quarter earnings report. The cruise ship giant recently put together an impressive track record of market-beating growth despite weak vacation demand in parts of its global vacation portfolio. But that challenge just got harder due to travel restrictions around the coronavirus outbreak that originated in Wuhan, China.

The virus won't have any effect on the fourth-quarter report, which covers operating data through Dec. 31, 2019, and China currently accounts for just a small percentage of its annual ticket capacity. Still, that developing situation could play a big role in the fiscal 2020 outlook that CEO Richard Fain and his team issue on Tuesday, Feb. 4.

Let's take a look at what investors might hear from Royal Caribbean in a few days. 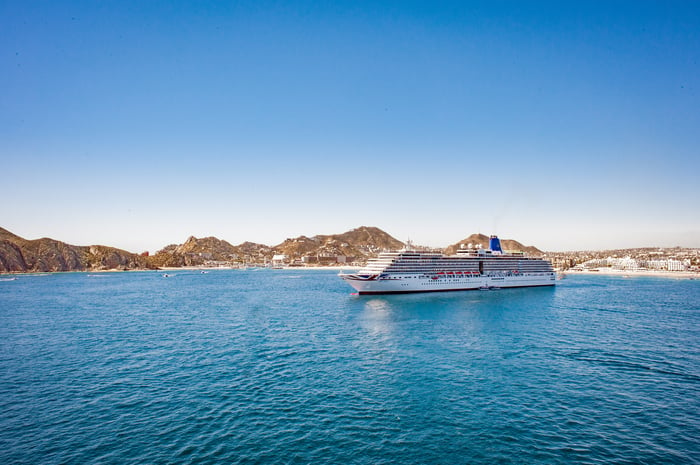 There have been no warning signs around demand challenges in recent months. On the contrary, Royal Caribbean affirmed its aggressive growth outlook back in early November despite the sharply negative impact of Hurricane Dorian, which closed several key ports for over a week.

Despite that historic hurricane challenge, the cruise giant is still aiming for net revenue yields (a key industry growth metric) to rise by about 8% for the full 2019 year. That stacks up well against the roughly flat result that rival Carnival (CCL -2.48%) is posting, and it's almost double the 4.4% boost that Royal Caribbean achieved in the prior year. Including currency exchange swings, most investors who follow the stock are looking for reported revenue to rise by 9% in the fourth quarter, to $2.5 billion.

Earnings are predicted to decline this quarter, but mostly for temporary reasons. Royal Caribbean said last quarter that many of its Hurricane Dorian-related costs, including relief efforts, would affect fourth-quarter profit. That's why investors are expecting net cruise costs to jump roughly 14% in Q4 to drive total expenses, excluding fuel, to an 11% increase for the year.

Assuming Royal Caribbean reaches its 8% projected revenue increase, these trends will constitute a small step backward on profitability thanks to the mix of hurricane challenges and extra investments into upgrading and remodeling ships around the fleet.

There will be more uncertainty than usual when Royal Caribbean issues its 2020 outlook on Tuesday. While vacation booking trends have been occurring further out from travel dates lately, that extra visibility will be offset by the volatile situation in China. Executives announced on Jan. 29, in fact, that they just decided to cancel three sailings originating in China through early February. While saying there are still "too many variables and uncertainties" around the outbreak to estimate its impact on the business, management noted that additional travel restrictions through February would reduce annual earnings by about $0.20 per share in 2020.

Beyond that, it's anyone's guess how the disruption in China will ultimately hurt the consumer discretionary business. That Asian market has been a solid source of growth during Royal Caribbean's operating surge since late 2018. It still only accounts for roughly 6% of the cruise giant's annual passenger capacity, so investors should resist the temptation to worry too much about any long-term impact.