Please ensure Javascript is enabled for purposes of website accessibility
Log In Help Join The Motley Fool
Free Article Join Over 1 Million Premium Members And Get More In-Depth Stock Guidance and Research
By Herve Blandin - Jan 31, 2020 at 9:00AM

The deployment represents a strong tailwind for the tech vendor struggling with structural challenges.

Extreme Networks (EXTR -2.00%) posted disappointing fiscal second-quarter results, and next-quarter guidance seems underwhelming. In addition, management postponed its ambitious target of achieving a non-GAAP (adjusted) operating margin of 15% from mid-2020 until the second half of 2020.

Within this challenging context, CEO Ed Meyercord highlighted in the earnings call that 5G would represent a growth opportunity over the next several years. In fact, given Extreme Networks' difficulties, 5G could become the crucial element that the network vendor needs to improve its long-term performance. 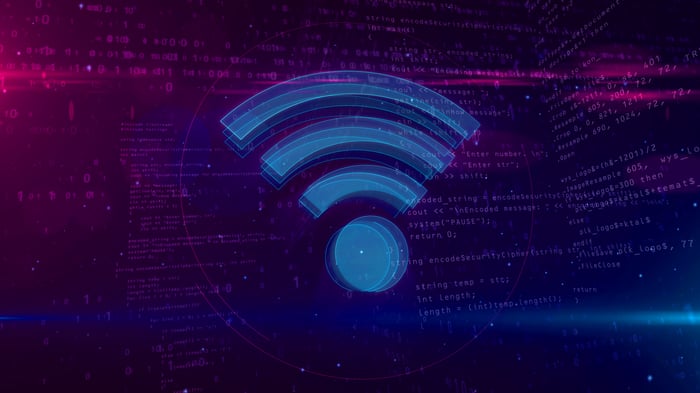 Extreme Networks sells network devices, like routers and switches, that connect computers and servers. And with its acquisition of the wireless vendor Aerohive Networks in August, it reinforced its portfolio with cloud-managed Wi-Fi infrastructure and software.

As a result, in contrast with niche vendors, Extreme Networks offers integrated and homogenous wired and wireless network solutions. But the company also competes with much larger players such as Juniper Networks and Cisco Systems.

Despite its 6% year-over-year growth during the last quarter, Extreme Networks' revenue of $267.5 million pales compared with Cisco's $13.2 billion. Besides, the company's revenue growth, which was below management's guidance range, was due to the acquisition of Aerohive.

Extreme Networks' lack of scale involves a couple of difficulties that have hurt its profitability (it posted GAAP profits only twice over the last 10 quarters, and fiscal second-quarter GAAP losses amounted to $23.5 million).

Second, operating expenses represent a significant part of revenue. Thanks to synergies between Extreme Networks and Aerohive, cost reductions should materialize over the next couple of quarters. But even if the company achieves this goal and gains scale, management says sales and marketing expenses would still represent more than 20% of revenue, which will remain above Cisco's expenses as a percentage of revenue. 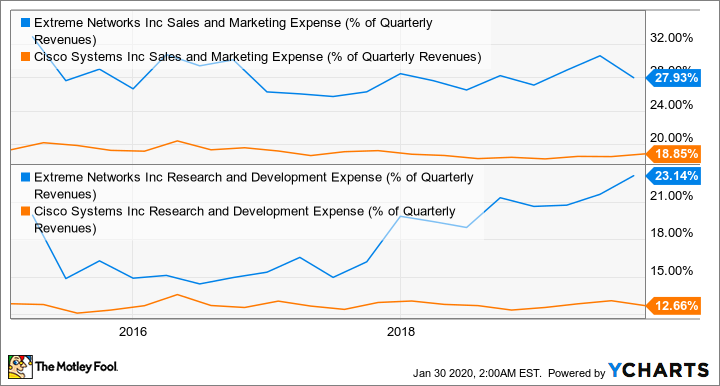 Besides these structural challenges, Extreme Network's legacy network portfolio seems to have extra issues. Last quarter, revenue from that business decreased to $226 million, down 11% year over year. Management explained that this underwhelming performance was due to delays with three large deals. But beyond these short-term difficulties, the company doesn't seem ready to capture some growth opportunities in this core business. For instance, in contrast with its competitors, Extreme Networks has yet to announce network devices that support the emerging high-bandwidth 400G technology.

But management highlighted the fact that 5G will represent a growth opportunity over the next several years. Extreme Networks doesn't sell any 5G equipment such as antennas, but this statement makes sense.

Delivering the high speed and low latency that this technology promises requires many decentralized computing infrastructures (which Extreme Networks offers with its edge networking solutions) to process data closer to the user and optimize the performance of applications. Also, the company's Wi-Fi portfolio could profit from 5G. The new high-speed wireless norm Wi-Fi 6, part of Extreme Networks' offerings, can handle 5G traffic for better performance by 5G networks.

Given the company's challenges, 5G could become a significant contributor to Extreme Networks' performance in the long term. During the last quarter, its cloud-managed wireless business increased by 10% to $42 million and represented only 15.7% of total revenue. In comparison, management said that a few ongoing specific deals related to 5G could represent annual revenue of up to $50 million.

But keep in mind that, in contrast with its disappointing recent results, the company must provide flawless execution to capture these near-term opportunities and capitalize over the long term.

With an enterprise-value-to-sales ratio of 1.16 and given its exposure to 5G, Extreme Networks looks like an attractive tech stock. But as long as the company doesn't reach a meaningful scale, its structural challenges won't disappear. And after its acquisitions over the last several years, the company's net debt of $234.9 million at the end of last quarter limits its possibilities for such transactions. In contrast, its competitors Cisco and Juniper have more cash than debt, giving them more possibilities to increase their scale.

Thus, 5G will likely become crucial to Extreme Networks' recovery in the next several years. But given the company's other challenges, prudent investors should stay on the sidelines.