Please ensure Javascript is enabled for purposes of website accessibility
Log In Help Join The Motley Fool
Free Article Join Over 1 Million Premium Members And Get More In-Depth Stock Guidance and Research
By Anne Burdakin - Feb 1, 2020 at 10:00AM

It's been a long trek in the wilderness, but the sun may soon shine on the RV seller.

Camping World Holdings (CWH -0.26%) has been on a wild ride ever since it tried expanding by buying Gander Mountain out of bankruptcy in 2017. With plans to open 70 Gander Mountain retail locations, Camping World simply bit off more than it could chew. The undertaking was too big for a company that had only 125 retail stores in 36 states at the time of the deal.

Camping World focused exclusively on selling and servicing recreational vehicles until the acquisition, which was intended to expand the business into all things outdoors. It never really got off the ground and dragged Camping World down with mounting losses.

Know when to fold 'em

A change in strategy was desperately needed before the losses ate into the very core of Camping World's business. Management stepped up and decided to cut losses in order to move forward.

CEO Marcus Lemonis is executing a turnaround plan to shed all Gander Mountain assets and refocus on Camping World's original business of RV sales and service. Regarding divesting the Gander Mountain assets, he said on the third-quarter investors call: "We have reduced our non-RV inventory by approximately $100 million, largely driven by the strategic shift. Our plan is to reduce non-RV inventory by an additional $40 million to $50 million in the coming months." 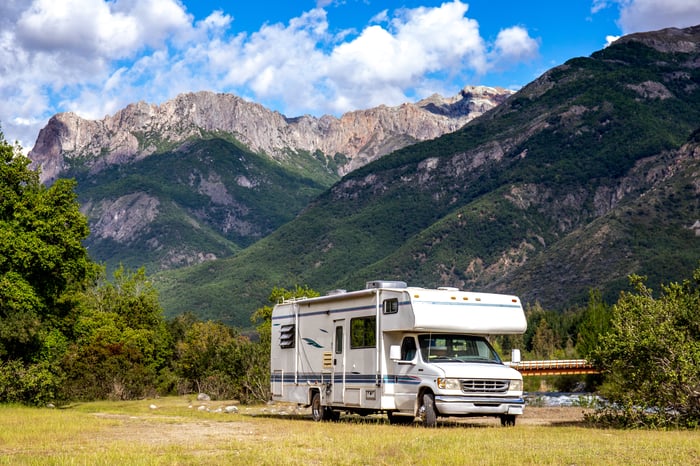 The turnaround may be just down the road

Besides shedding the disastrous Gander Mountain assets, Lemonis sees financial health returning through selling more used RVs than brand new ones. He said, "We made a decision to decelerate our new inventory, understanding particularly in the motorized sector, and reinvest in the used inventory, which is why our used is up 14.6%."

Lemonis added, "We turn our used inventory approximately five times a year at a 13% to 14% margin."

Shifting focus to the used market is indeed paying off in better profits. Third-quarter results showed new-vehicle units sold decreased by 4.7% year over year, while used vehicles sold increased by 14.6%. The average selling price for new vehicles increased 2.4% -- it was up 9.0% for used vehicles.

To make the best buying decisions in used RVs, the company is calling on the expertise of more and more data scientists in parsing all historical sales to gauge the sweet spot of demand. The company then tailors its decisions on used RV acquisitions to that data, aiming to better meet specific customer desires and maximize sales dollars.

The company sees the turnaround plan producing substantial improvements in 2020. It expects leaner operations to generate a $40 million boost to adjusted EBITDA profits and a $35 million boost from already completed restructuring and inventory realignment.

There's a nugget of opportunity for alert investors

Recoveries take time and often encounter unexpected bumps in the road. Camping World's turnaround is promising, because the decision to divest the Gander Mountain assets was decisive and thoughtful. The company is keeping several prime locations where it lacked dealerships to leverage them for RV sales and service, thereby expanding its footprint.

Camping World has very capable management determined to turn things around, but investors should wait at least one more quarter to see how quickly results fall to the bottom line. The stock has essentially doubled from the lows it hit last summer and is due for a breather.

Watch for improvements in revenue and margins as the company shifts to in-demand used RVs, along with an uptick in EBITDA for signs that the turnaround is succeeding. Once Camping World improves those metrics, I think it will make for an attractive growth investment opportunity.