Please ensure Javascript is enabled for purposes of website accessibility
Log In Help Join The Motley Fool
Free Article Join Over 1 Million Premium Members And Get More In-Depth Stock Guidance and Research
By Adria Cimino - Feb 1, 2020 at 11:17AM

Luxury-goods makers are losing out on sales in one of their big markets, but that doesn’t mean it’s time to sell their shares.

Almost 60 million people are under lockdown in China, stores and offices have closed, and the U.S. and other countries are evacuating their citizens from the epicenter of the coronavirus outbreak. So far, more than 7,700 cases have been confirmed in China, and at least 170 people have died.

All of this is happening during the Chinese New Year holiday, when people in China typically buy gifts, go out, entertain, and celebrate. Last year, they spent the equivalent of about $146 billion during the holiday, according to the Commerce Ministry. This year, as coronavirus fears intensify and customers stay home rather than go shopping, it's clear that the figure will be much different. 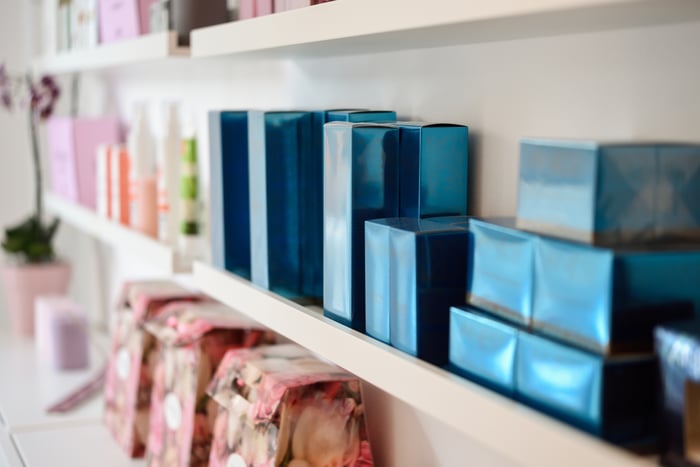 Companies such as LVMH Moet Hennessy Louis Vuitton SE (LVMHF -1.66%), The Estee Lauder Companies (EL -0.94%), and Hermes International (HESA.F -2.92%), makers of a vast range of luxury products, normally could expect to benefit during this time of celebration.

In a 2019 report, LVMH said the Chinese New Year was key for its subsidiary DFS, a network of duty-free shops, which saw strong performance during that period. The luxury-goods maker also noted growth in its wine and spirits business in China last year, citing the Chinese New Year as part of the reason. LVMH makes 30% of its $59.2 billion in revenue in Asia excluding Japan.

And LVMH isn't alone. Chinese customers make up a large share of global luxury goods sales. Mainland China has been a growth driver for the luxury-goods industry, according to a report by Bain & Company. In 2019, the market there grew 26% to $33 billion.

In its fiscal first-quarter earnings report, skincare and cosmetics maker Estee Lauder said that many of the "overachievements" in the quarter came from business in China. The company said it had double-digit growth in China in all categories, all channels, and almost all brands during the quarter. Estee Lauder makes about 25% of its $14.9 billion in annual revenue in the Asia Pacific region.

Hermes, known for its silk scarves and leather goods, called the performance of mainland China "outstanding" in the third quarter; it reported a 19% increase in revenue in Asia excluding Japan. Hermes makes 36% of its $6.6 billion in annual revenue in Asia excluding Japan. In the third quarter, the company also announced the opening of its 26th store in China.

How dire is the situation for these companies?

Surely, luxury-goods sellers will see a dip in sales over the Chinese New Year period, which began Jan. 25 and ends Feb. 8. That isn't great, but companies like LVMH, Estee Lauder, and Hermes are strong enough to handle a soft period that lasts for a few weeks. LVMH chairman and CEO Bernard Arnault told The Wall Street Journal that the situation wouldn't be difficult for his business if it continued through March, but that "if it lasts two years, that would be another story."

Last year, we saw an example in another major region for luxury goods -- Hong Kong -- as months of protests against its government led to shop closures and a drop in customers visiting shopping districts. The troubles hurt luxury-goods companies, but not drastically. LVMH said that because its duty-free business faced a slowdown due to the Hong Kong situation, the business is entering 2020 with a "vigilant approach," and the company will diversify its locations and activities. But overall, LVMH reported a 15% increase in revenue for the year. Estee Lauder also spoke of the Hong Kong protests in its last earnings report, saying net sales there declined in the quarter due to the unrest, but the company's net sales overall rose 11%. And Hermes said that sales rose in Hong Kong in the third quarter in spite of the troubles.

The problem is that if the coronavirus continues to spread, either within China or beyond, it will lead to a drop in consumer spending over time. Not only will companies lose sales in China, but they'll also miss out on purchases that Chinese travelers -- kept home due to the crisis -- would have made abroad. Nevertheless, while luxury-goods companies may take a hit for a quarter or even the full year, which might be a short-term drag on shares, this shouldn't prompt long-term investors to avoid luxury-goods names.

What are investors to do?

The Hong Kong protests might be our guide. Considering the strong revenue results at LVMH, Estee Lauder, and Hermes -- even through the Hong Kong events -- it is likely that they can weather this storm, too. Governments and health officials are making the coronavirus outbreak a priority, so at this point, we can hope the problem can be contained.

For the month, Estee Lauder shares are down 5.4%, while U.S.-traded shares of LVMH are down 6.4% and Hermes stock is down 1%. Any declines in the share prices -- and they may continue to drop as the coronavirus story unfolds -- aren't a reason for panic. Instead, they're opportunities to buy shares of solid companies that have proven themselves.

Why Estée Lauder Stock Fell 12.5% at the Open Today