The agriculture-focused lender faced macroeconomic headwinds in 2019. Will it be more of the same in 2020?

Great Western Bancorp (GWB) beat analysts' estimates with its first-quarter 2020 earnings report last week, yet the stock has fallen 8% in the week since the report's release. Two key questions for investors going forward: What was behind the drop? Where does it go from here?

Great Western, based in Sioux Falls, South Dakota, is one of the leading agricultural lenders in the country. The stock underperformed in 2019, returning 11.1%, which was well below the S&P 500 average, as well as the average return in the banking sector. This was due, in large part, to a difficult market for farmers.

The Minneapolis Federal Reserve, in its third-quarter agricultural credit conditions survey, outlined the problem. Farm incomes fell in the third quarter due to low crop prices and trade woes, and that led to less spending on capital equipment and farm purchases. Furthermore, it pushed the rate of loan repayment down and prompted more renewals and extensions. In addition, interest rates on loans decreased due to Federal Reserve rate cuts. The report expected farm incomes to decrease further in the fourth quarter. That represents some severe headwinds for lenders like Great Western. 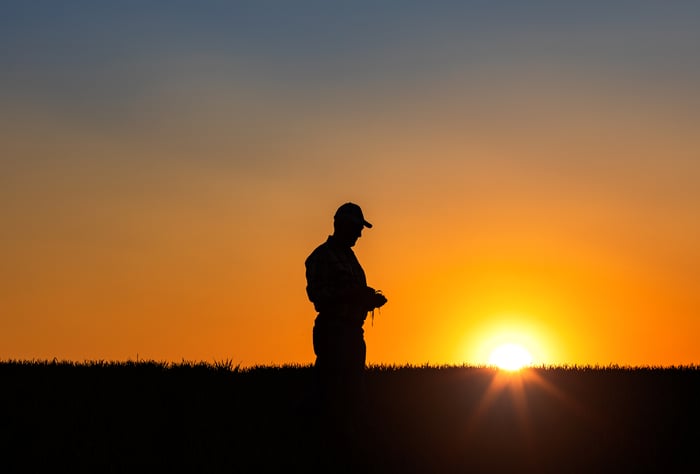 Yet, the company had a decent quarter, all things considered. Revenue was essentially flat year-over-year at $121 million, while net income was down 5.8% to $43.3 million. Earnings per share were $0.77, down from $0.79 a share in the previous year's quarter, which beat analyst estimates. Assets were up slightly to $12.8 billion year over year. Expenses were down year over year, giving the bank an efficiency ratio -- expenses divided by revenue -- of 46.2%, which is better than its peers. A lower efficiency rating means it costs less to generate income. For banks, an efficiency ratio under 50% is considered excellent.

The loan decline came primarily from commercial non-real estate loans, which decreased $43.5 million, and agriculture lending, which dropped $28 million. The company also reported $167.6 million, or 35.5%, in loans categorized as "substandard." The increase in substandard loans was primarily due to downgrades in agriculture and agriculture-related commercial loans. "Watch" loans also increased by $10.7 million.

"While we have seen substandard loan balances increase through the quarter due to the migration of a small number of individual exposures, we feel comfortable with our strategies of working with customers to rehabilitate or exit many of these relationships," Ken Karels, president, CEO, and board chair at Great Western said in the earnings release.

In the first-quarter conference call, Doug Bass, chief operating officer, said the company will rebalance the risk profile of its loans, particularly those in the agricultural sector.

"Our priority of improving asset quality is expected to result in exits that will impede loan growth which we have seen traces of already. This will continue over the next few quarters and our expectation is still for loan growth to be in the low-single-digit range for 2020," Bass added.

On the substandard and watch ag loans, Bass explained that they are not a monolith as some segments -- like dairy and the hog industry -- are improving faster than others, like grain. It's hard to predict quarter to quarter, but he does expect to see prices rise over time, as well as steadily improving loan quality.

It's hard to say with 100% certainty what caused the stock price to drop 8% this week, but it may have had a lot to do with a federal report that came out last Thursday that U.S. farm bankruptcy rates jumped 20% in 2019 -- the largest increase in eight years.

Considering that experts don't expect the ag market to change too much in 2020, lenders like Great Western could continue to underperform. The good news is that the company has solid fundamentals and is undervalued, but investors may want to watch for more clarity on the market.

Why Shares of Great Western Bancorp Are Rising Today