Despite the often disappointing performances of cannabis companies, production and sales figures for the green stuff are rising at very healthy rates. Last week, Statistics Canada updated its data about the contribution of various sectors to that country's gross domestic product (GDP). You can probably guess which young industry saw a notably steep rise.

As if to hammer home the point, one high-profile North American marijuana stock reported quarterly figures that were nicely boosted by what's effectively its cannabis business unit. Let's take a closer look at both developments. 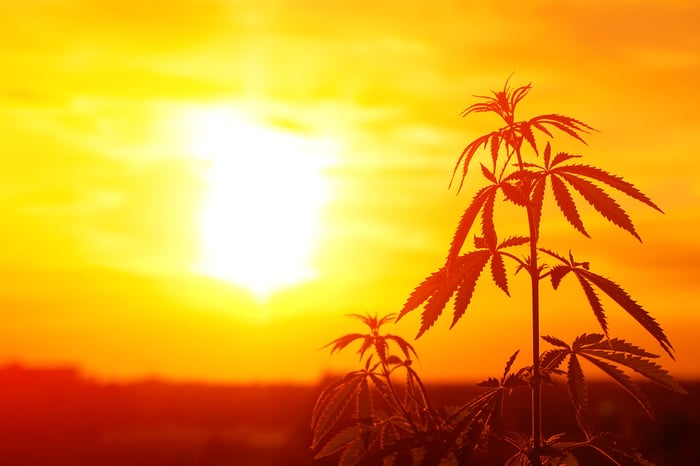 The official statistics bureau of the Canadian government said that the marijuana sector's contribution to GDP rose to $7.4 billion last November. That was a very healthy 15% year-over-year increase, which outpaced not only the broader economy -- it grew 1.5% over that same stretch -- but some of the most important industries in the country.

This closely followed another data set from StatsCan showing that licensed cannabis sales in Canada topped the equivalent of $100 million that month -- a new record for the industry, and the first time it crossed the nine-figure mark.

This is very encouraging for marijuana stock investors. It shows that, despite the many hiccups and challenges in this fully legalized market, there is plenty of demand for product, and enough manufacturing capacity to satisfy it. Now, if we could only get those supply and licensing problems ironed out...

While we're on the subject of green growth, Scotts Miracle-Gro (SMG 4.39%) reported first-quarter 2020 figures last week that, in a way, were powered by cannabis.

The company is a "picks-and-shovels" play on marijuana thanks to its Hawthorne Growing subsidiary. Formerly an independent company, Hawthorne makes the hydroponic equipment popular in indoor cannabis cultivation.

Since its Q1 doesn't cover prime growing or cultivating season for plants generally, it's typically an off-quarter for Scotts Miracle-Gro.

Nevertheless, the company managed to post a non-GAAP (adjusted) net loss that was considerably narrower than analyst expectations. It came in at $62 million, or $1.12 per share. On average, prognosticators were anticipating a per-share deficit of $1.27.

This is a unique marijuana stock, as it's basically the only real equipment picks-and-shovels play in town at the moment. That's a fine position to be in, since if anything the U.S. market will become wider and deeper with new states flipping the switch on the legalization of recreational marijuana. And, of course, there's that nice Canadian growth.

This company's popularity with cannabis stock investors is deserved, and I think its stock can still go higher.