A slew of announced and expanded partnerships helped to propel the stock up significantly.

This sharp move propelled the stock beyond the $100 level, but note that this was still more than 50% below the peak of $235 reached back in July 2019. However, it's becoming increasingly apparent that Beyond Meat is back to being a growth stock again. 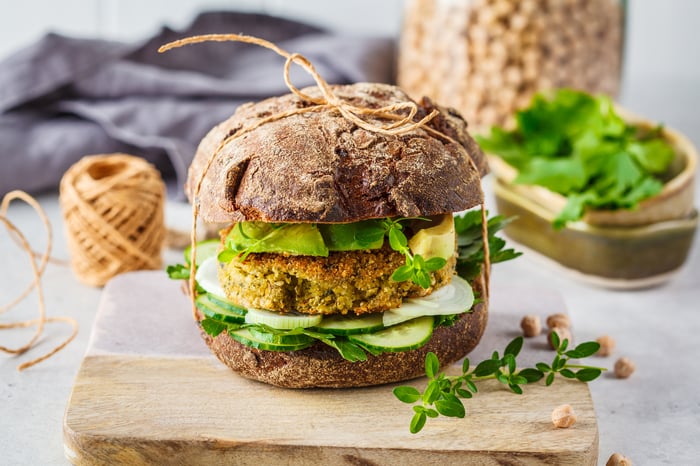 Beyond Meat announced several notable partnerships in January, which paved the way for an explosive move in its stock as investors felt more optimistic about the company's prospects. It had just announced an operating profit for its third-quarter 2019 earnings, reversing from an operating loss a year ago, and it also registered a net income of around $4.1 million for the quarter.

Also, a slew of announced partnerships and promotions has helped to keep Beyond Meat in the spotlight and to boost confidence in its ability to keep generating profits. First off, Starbucks (SBUX 3.87%) CEO Kevin Johnson mentioned in an open letter that the company will expand its plant-based options and migrate toward a more "environmentally friendly menu."

Denny's will expand its partnership with Beyond Meat by selling plant-based meat burgers at 1,700 locations; McDonald's has agreed to expand its plant-based burger (named the PLT for "plant, lettuce, tomato") to 52 restaurants across Ontario, Canada, for 12 weeks; and Dunkin' Brands' Dunkin' Donuts is partnering with legendary rapper Snoop Dogg to promote Beyond Meat's plant-based sausage patties.

It's music to investors' ears as more restaurant chains are either pivoting toward plant-based options or expanding existing trials. However, it may take a while before these chains actually adopt these plant-based options, but it does look promising for Beyond Meat for now.

Seth Goldman, chairman of Beyond Meat, had also mentioned last month that he hopes to be able to tap into the mainland Chinese market this year, though nothing has been announced thus far. The pent-up anticipation, as well as the momentum gained by the company, should continue to buoy its stock price for the near term.